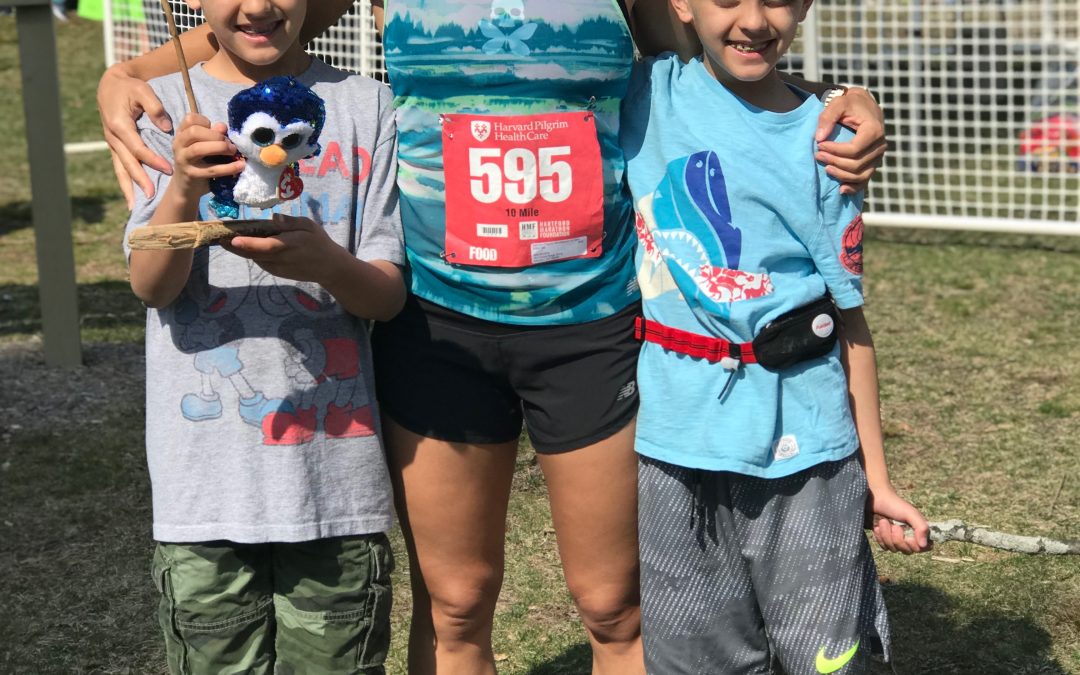 “I should be on a bike by now,” is what I was thinking around mile 7 of the Middletown 10 Miler this past weekend. I’ve been primarily racing triathlon for so long now that I almost forgot what it’s like to “just” run. Here’s the good, bad and ugly over 10 miles in Connecticut.

Between everyone in my family being sick (including myself) in the week leading up to this race, I definitely thought twice about lining up. I also have my goal race – Duathlon National Championships in South Carolina – in less than a week so I was wondering how smart it was to be running this in the first place?

The weather was looking amazing (57 degrees and overcast), my sickness cleared up and my coach told me to put in a good effort but not overdo it. It’s almost impossible for me to “not overdo” it in a race but that was the mantra on repeat in my head for the duration of the race, and it was definitely helpful.

My kids were also careful not to “overdo” their spectating…

2. ENOUGH ABOUT THE WEATHER

As if the start of a race isn’t agonizing enough, every single person who spoke (for some reason there were about five people having to wish us luck) mentioned the weather.

Obviously weather is a major factor in racing but, since this race didn’t start until 11:30am and we have had temps in 30s and 40s for the last month, the fact that the sun was blazing and it was already 60 degrees was shitty racing weather.

The girl next to me and I were whispering things like “enough about the weather!” “this is actually horrible conditions!” “I wish it were more like 50 and overcast!”

There are so many. One of the worst are the people having loud, awkward conversations during mile one. Seriously can you please STFU?

To me, it’s more annoying than music blaring because we are forced to listen to inane conversation in the first few miles when I’m just trying to focus on pacing and getting into a groove. This one girl was asking her coach which race she should do next and the deciding factor was the fabric of the t-shirt offered! I almost turned around and throat punched her but I couldn’t spare the energy.

Luckily, she realized (and announced to everyone!) that she was going way too fast after the first mile so she dropped off and luckily I never heard her again.

One thing my coach really wanted me to do was some heat training before heading down to South Carolina. Well, she got her wish. Since it’s been in the 30s and 40s most of this past month, this race temp felt like 107 degrees.

And it was hilly.

I knew it was going to be hilly and I always run hills in training but it sucks when it’s actually happening.

5. RACE WHERE YOU ARE

It’s so very hard to let go of old paces and race times. In my mind I can still rip off 7:00 minute miles, even with the hills. The reality is I’m not in that kind of shape and this was not a goal race. The ego is still a hard creature to tame but, if I run where I actually am fitness-wise and not where I think I should be or want to be, things turn out much better.

I saw the 1:20 pace group (8:00min miles) early and recognized the leader from Instagram. I decided that I would do my best to keep them in sight and 1:20 would be a fine finish time.

Now, I’ve said things like this to myself in the past only to have the plan go flying out the window within the first few miles, but not this time, and I was rewarded.

I have so many mixed feelings when it comes to pace groups. Mostly, I hate them and wish they would cease to exist. *insert old lady voice* Back in my day we had to train to run the desired pace on race day and then just hope for the best, without GPS watches or pace groups. Sometimes it worked out and most often, it didn’t. Guess what? Even with pace groups, it seldom works out.

I hung back from the 1:20 group until I caught them around mile 3. Then, a curious thing happened, I was speeding up and pacing to pass them but then I heard the leader say they were “fine and on track so no need to worry if the pace felt slower – just enjoy it.” What? Enjoy it? For whatever reason, I listened and slowed with the group. I’m pretty sure it saved me from blowing up later.

I also heard the leader say “If you can stay with me until mile 8, this race has a fast finish and you will be golden.” Some of that was true.

They will come and, when they do, you had better be ready!

Mine hit me around the 6-7 mile mark and the 1:20 group slowly got away from me. This is when I started bargaining to just “keep them in sight” and reasoning they were “only 30 seconds ahead.”

It was so, so hot and I was pouring cups of water over my head to stay somewhat cool. The hills were not letting up and I started to question everything — racing, the meaning of life, electrolytes, Freud — you know, everything, but then I reined it in and starting telling myself what I needed to hear.

I turned it around just in time for a gorgeous stretch of packed dirt trail that swept downhill for about 3/4 of a mile. Just like that, I was back in it.

I really loved the days when it was just Gatorade. I can tolerate all the chemicals in Gatorade very well, probably because I grew up on the stuff. This course had Nuun. I’m not a fan of Nuun but I figured it wouldn’t be that big of a deal, and it wasn’t until the last one I took wasn’t mixed very well. It was like drinking grains of sand in watery orange drink. It’s what I envision must be given to inmates doing laps in the prison yard in the pouring rain.

I will say the volunteers were on point with the cups and yelling out what they had, even though the Nuun cups were clearly marked as such. I also loved that one guy had a sign around his next that read “NUUN!” Genius.

I was promised a fast finish and, that’s mostly what was given. At least all of the big hills were behind us and the final two miles were a mental battle all the way.

I was just trying to push a little bit more and I starting thinking of my boys waiting for me at the finish.

I must confess that I would have totally booked it to the across the line to make it under the 1:20 mark but there was no way I was going to rush the moment with my kids. Who knows if this is the last time that will happen?

Although I did not run negative splits, I’m very happy with my consistency…

Overall it was a very well organized race and I loved the challenge. I also loved how strong my body felt. I was definitely suffering, but I never doubted my body and felt nothing but it giving back to me with each thing I asked. My training is definitely working and I am ready for the Duathlon National Championships!

And after those 10 miles, I was also ready for a beer.

Don’t forget to follow my travels to South Carolina and the Duathlon National Championship later this week on Instagram. Hopefully I’ll be back soon with a great report and a lot less bitching…but no promises.

What annoys you most about other racers?

What is your ideal racing weather?