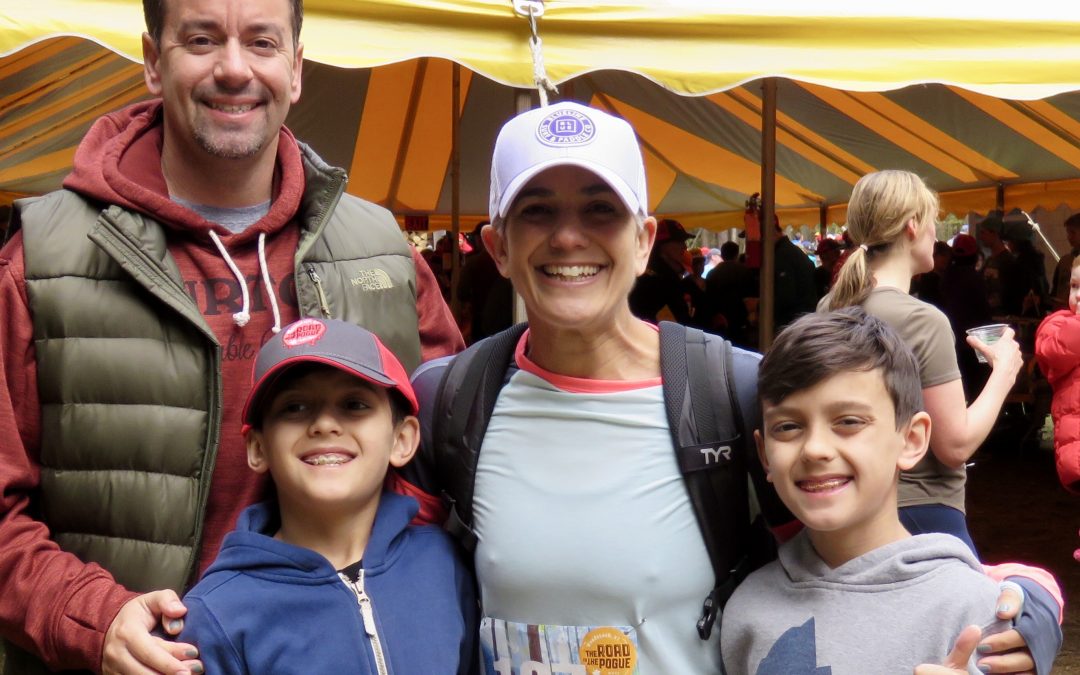 Every “serious” runner should do a trail race at least once, and preferably once a year, as a reminder that racing doesn’t have to be taken so seriously, other runners are friendly and distance is relative.

Google it if you don’t know what it stands for but basically it means they don’t sweat the small stuff and, everything is small stuff. This is not to say the race isn’t well organized because it was extremely well organized but, unlike road races:

Before you get your compression socks twisted, I’m not saying runners typically are not friendly but, during this trail race I had actual mid-race conversations…about the scenery.

Now, I wasn’t at the front of the pack but usually when I race everyone around me is silent and laser focused. Not at the Pogue! Grown ass men were saying things to me like:

3. BLING AND PRIZES WERE GOAT!

Ok, maybe I’m getting a little carried away with this one but I couldn’t care less about a finisher’s medal so when I heard the Road to the Pogue gave out trucker’s hats to all the finishers, I was in!

Sadly, I was not fast enough to get the second (or third) best prize – a growler of pure Vermont maple syrup or liquid gold! The top finisher’s also received a carved cutting board with the race name and their place, obviously for cutting enormous blocks of Cabot cheese to pair with their wine and syrup! So jealous.

This course was very tricky and kept me guessing almost the entire time. First of all those DGAF race organizers haphazardly placed mile markers pretty much wherever. If it wasn’t for my Garmin I may have believed mile 1 was really THAT long (the marker was placed almost at mile 2) and that mile marker 6 actually indicated the finish line was close. Ha!

After climbing over 1,300 feet, it felt amazing to race downhill for the last couple of miles (?) but the finish line was deceptively far. I could hear the crowd and foolishly thought I was close but they looped us around quite a bit, had one more short but steep uphill section, a giant expanse of mud and a few sharp turns before the actual finish came into view.

It was worth every “extra” step!

What else would be at the finish of an epic Vermont race then homemade pancakes with pure Vermont maple syrup? Oh and my family was there too.

I discovered the only thing better than skiing Vermont, is trail running or hiking in Vermont. We discovered a new place to hike with the kids and I had an amazing, laid back and super fun race experience. And I was happy with my seventh place (out of 50) age group finish too, although next year I will be gunning for that vat of syrup!

Obviously I highly recommend this race or, really any trail race, to shake things up a bit and as a reminder of how fun and enjoyable racing can be.

I can’t wait to do it again next year, and I may have even convinced my husband to do it too. He’s motivated by any kind of food as a prize.

Do you trail race or run? What do you love/hate about it?

What is the best thing you received for a finisher’s award?