Alexandrea and the Terrible, Horrible, No Good, Very Bad Travel and Race – Part 1 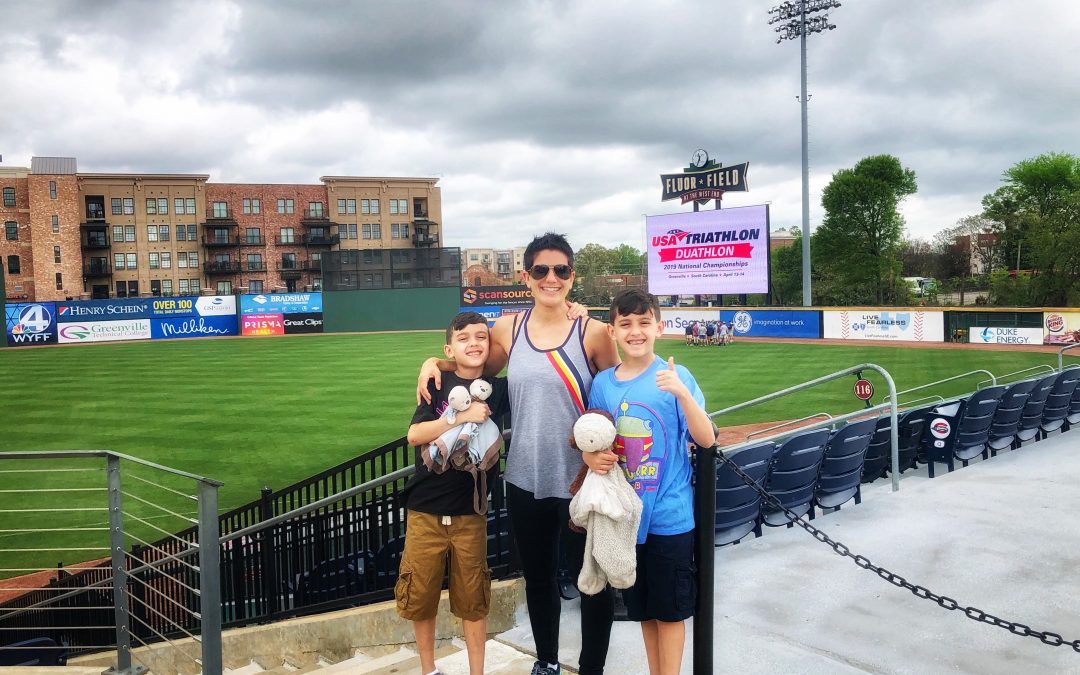 “We have a very minor mechanical issue,” are the words that started the shit show that was my travel to Greenville, South Carolina and the Duathlon National Championship race.

If you think you’re having a bad day, pour yourself a glass of wine and read this, and I guarantee you will feel better afterward, and will possibly be moved to send me a gift or at least say a small prayer of thanks that this insanity didn’t happen to you.

I knew there was an issue when our plane was still parked at the gate 10 minutes after everyone was seated and ready to go. There were no announcements and the flight attendants looked almost bored. Myself and the boys were traveling alone from Hartford, CT to Washington, DC. We had a scant 50 minutes to make our connection to Greenville once we landed at Dulles, so I knew any time lost on the ground in CT would kill our connection.

The minor issue (something with the back-up brake hydrolytic system having a leak they could not identify) caused the delay of our flight and, with that, our adventure began.

We deplaned and I made a phone call to my dad who had booked the trip though his travel agent. The angry mob of displaced passengers had swarmed the agent desk and the United employees could not have been more worthless. Honestly United, you suck very, very badly.

After several back and forth phone calls and text messages, the travel agent was able to rebook us on an American Airlines flight to Charolette, NC where we would need to rent a car and drive the hour and half to Greenville, SC. It was by far our best option.

After we re-booked on a different carrier, I went to the United desk (which was now clear since it was about hour later) and asked about our baggage being transferred. After checking our baggage tickets and calling someone on her radio, the agent assured me our bags were removed from our original flight and brought to American Airlines flight.

After being at the airport for over five hours, we finally boarded our flight to Charolette. We thought the worst was over. How foolish.

ARRIVAL IN THE CAROLINAS

The flight was uneventful and I held my shit together nicely. We deplaned and headed to baggage to find we had no baggage. Because, of course.

I had to fill out forms with both United and American Airlines because no one knew where our bags were yet everyone assured us they would arrive “somewhere.” United figured they went to Greenville even though that asshole at United in Hartford told me they would be in Charolette.

Side note: The boys were ridiculously optimistic and so well behaved though this entire process. However, their most prized possessions of Lamby and Doggie and the blankets they have had since birth were in their suitcase. This was the first time they freaked. What I couldn’t tell them was that I had their brand new birthday gift iPhones in MY suitcase (which my husband told me to pack and check and all would be fine!) so I was shitting myself.

I sent this to my husband, who was in Las Vegas and was flying to Greenville the following night to meet us…

With nothing left to do but go rent our car and drive to our hotel in Greenville we headed out of the airport.

Our rental car, which was supposed to be about $350 was now costing over $700 because I wasn’t bringing it back to the same airport. Yeah, that makes sense. Ok. Whatever. I would have paid half a million dollars to get the hell out of there and back on track so I just handed over my credit card.

Finally, we were on the road to Greenville! And it was rush hour! And we were starving! My choices were Bojangles, Chick-Fil-A and the Waffle House. Welcome to the south y’all.

I did not choose wisely.

We made it out alive and finally arrived at our hotel in Greenville around 8pm. We started at the airport in Hartford at 9am so, after 11 hours of travel we were finally…hahaha – you thought I was going to say done, right? WRONG!

No luggage at the hotel and the kindly gentleman at the front desk told me lost baggage is usually delivered around midnight. That makes sense. So I asked where the nearest Target was and off we went to buy toiletries, clothes and Vodka. Oh how I wish they sold Vodka at Target.

The boys were deliriously happy with new Fortnite t-shirts and pajamas and I was snuggled in with episodes of Veep and a bottle of wine. I turned out the lights around 10:30pm dreaming of my luggage.

DAY ONE IN SOUTH CAROLINA

We woke up and, guess what? No luggage. I called United and, check this shit out, they told me it would be easier if I just went to the Greenville airport to get the luggage myself. Oh, wait, I’m sorry, do you know what would have been easier? YOU PUTTING OUR LUGGAGE ON THE CORRECT PLANE SINCE YOU HAD TWO HOURS TO MOVE IT 500 FEET FROM ONE GODDAMN PLANE TO ANOTHER!

I put the same clothes on that I wore the day before and took the boys to an amazing breakfast where I ordered biscuits and gravy as my side. Then I remembered there’s sausage in the gravy…and I ate it anyway…and it was delicious.

Luckily for us, the Greenville airport is about as big as the one in Hartford so it was quick and easy to park and get to the baggage area. After about 30 minutes of fumbling and calling back and forth, we walked 500 yards and found our suitcases sitting in the United baggage claim office. Is there no other industry on the planet as incompetent and ignorant as the airline industry? Asking for a friend.

We could now start doing the things I actually needed to do for my race. Step one: pick up my race packet.

After a gorgeous 30 minute drive we arrived at Flour Field, Greenville’s minor league baseball field, and picked up my race packet with zero issues. We couldn’t hardly believe it. Was our luck turning around? Oh, bless your heart. Not a chance.

Tune in next time for happy, sunny adventures in downtown Greenville and devastating, frustrations with my bike delivery. And, you won’t want to miss the agony and misery that was my national championship race! So much to look forward to…

What was the worst thing that has happened to you when traveling?

When is the last time you traveled for a race?

Best and worst place you have eaten while traveling?