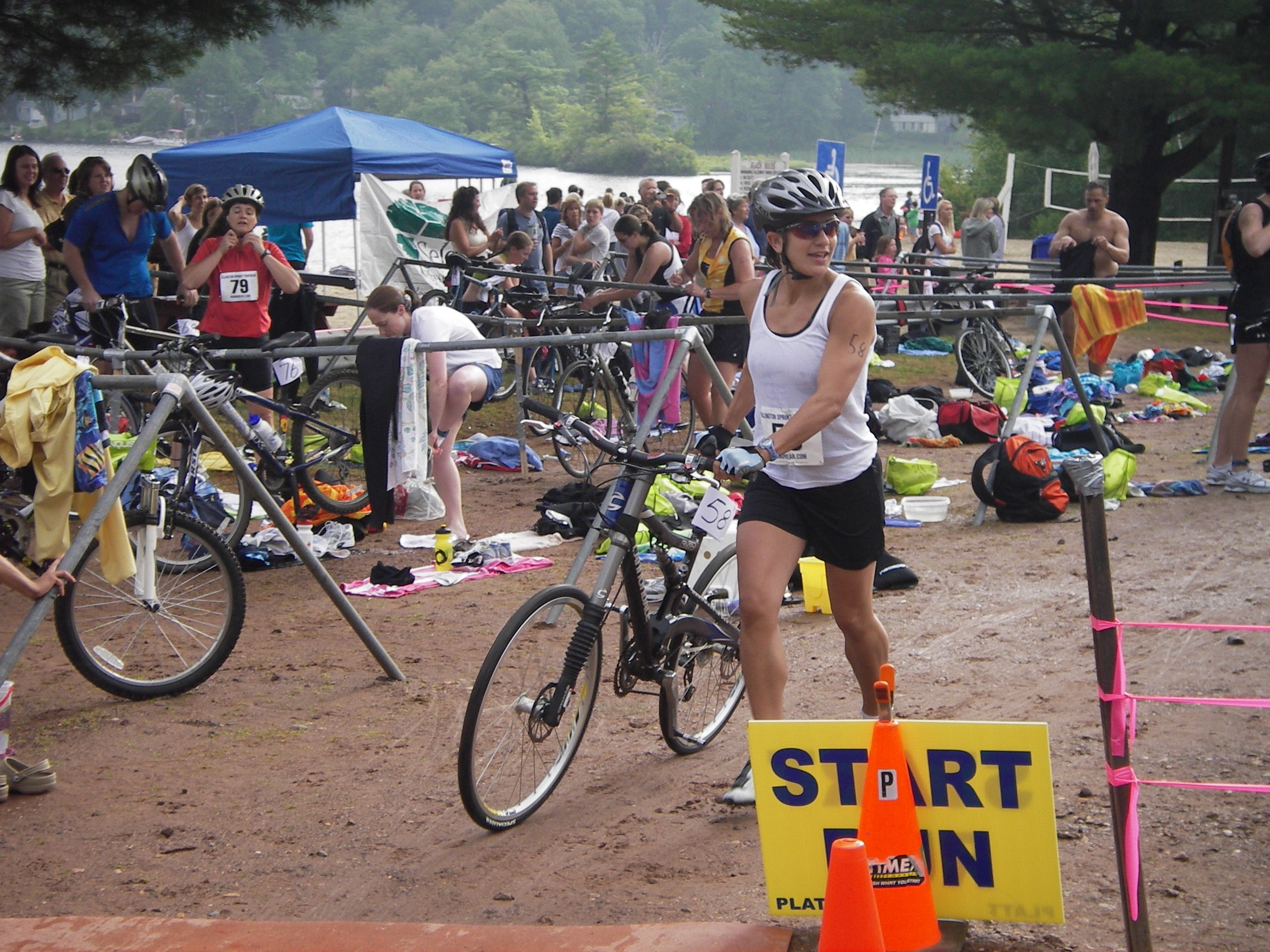 Once again it’s time for me to face my fears and race my annual triathlon.  Yes, I’m a “seasoned” racer but not in the TRI.  I can’t swim.  Well, let me rephrase that, I can’t swim in open water.  I can swim laps in a pool.  A lot.  Somewhat quickly.  Once I get in the lake I am likened to a Golden Retriever puppy who is swimming for the first time – arms (paws) flailing, hyperventalating, splashing around in no apparent direction, etc. Are you serious? I have to swim THAT far?

This whole triathlon “thing” came about when I was at the end of my pregnancy with the twins.  I was obviously not in the right frame of mind and so my neighbors took advantage of me.  Our neighborhood sits atop a mountain that overlooks a lake.  A seemingly harmless lake.  In 2009 the powers that be decided to have the first annual triathlon there and of course my neighbors were quick to point it out to me, “Did you hear about the TRI at Crystal Lake?” “You’re going to do it, right?”  Um, hello, I’m 35 weeks pregnant with twins and the TRI will be three months after they’re born.  Of course I will do it!

I thought it would be a perfect post-pregnancy goal.  I thought, if J-Lo can do it, so can I!  Seriously?  I mean, the only  thing J-Lo and I have in common is that we both have twins.  I’m sure she had a trainer, chef and nanny all ready to go so that she was race ready after her twins were born.  I had an over-stressed, over-tired husband and aunt who could barely function with all that was going on after those babies came!  But, I was still in La La Land about the reality of having newborn twins and then getting back into shape, so I signed-up.  Nope, didn’t even wait to have the babies – just signed right up like a massive a-hole! Oh this TRI is going to be so easy…ha ha ha…I hope my hair looks this great coming out of the water.

Had I ever done a TRI?  Nope.  Did I have a road bike?  Nope.  Had I ever swam in the lake for a long distance?  Nope.  Had I run one freakin step in six months?  Nope.  Well then…I should definitely do my very first triathlon ever three months after having twins!  I mean, really.

Now it’s the end of April 2009 and the boys were born April 13.  I had a c-section, I had a herniated belly button because I’m 5 foot 1, weigh 113 pounds and I was pregnant with twins that I carried for 37 weeks who weighed 5 pounds each at birth.

I will never forget going for my first postpartum run.  I think I cried tears of happiness and pain at the same time.  I was slow and I could feel my ass jiggle which was not something I was accustomed to!  What the hell was I thinking?  I could barely make it out to train at all because I was up 24 hours a day either feeding, holding or changing a baby. When I wasn’t doing that I was pumping, cleaning, doing laundry and making baby food.  I slept in spurts and was delirious whenever I even had time for a workout.  But, I never came back from a run or bike or swim feeling like I shouldn’t have gone.  That is the magic of exercise…either that or I was high on endorphins and hormones. This is my nervous smile. Bridget, on the other hand, was completely calm.

Now, I mentioned that I did not have a road bike, right?  Oh no, I took my mountain bike and put road bike tires on it.  Oh yeah, that will definitely get me up the 18% grade hill at mile 10 – no problem.  The one advantage I did have was that I basically live on the route.  The lake is at the end of my road and then the loops for the bike and run went off from there.  I did not swim even one time in the lake.  I was dreading it so much that I decided to just be in complete denial until race day.  Good plan.  I did bike the route a few times and I was definitely trying to run as much as possible since I knew that was the last leg of the race and should be my strongest. Don’t I look strong here?…or maybe more like just praying I make it to the finish?

On race morning I was so nervous that I almost puked up my breakfast.  The only thing that saved me was #1 I had a bunch of friends doing it with me and #2 Not much was expected form the postpartum, crazy twin mom.  It was a win/win. I’m just so happy to be out of the water at this point!  Check out that mountain bike folks.  There’s something you don’t see at a TRI!

When that gun went off at the start I did my best to stay afloat.  This is no easy task with a bunch of women all swimming in very close proximity to one another and in race mode.  Somehow, by the grace of God, I made it out of the water panting just like the Golden Retriever I was, but I had a huge smile on my face because the worst was over.  I don’t remember the bike and swim in particular – I just did the best that I could.  I ended up coming in third in my age group and I was thrilled!  I had done it. The following year I won the whole damn thing (with a real road bike!) and every year since I have come in second (damn you Bonnie Armstrong!).  I still have a very real fear of getting in that water but I realize that it’s good for me.  I need to line up on that beach with a good dose of fear.  I like having to prove something to myself.  I like being afraid of what I may do.

The TRI keeps me humble.  It keeps my ego in check and my fear alive.  I will continue to do it as long as I can and maybe one day I’ll learn how to swim!…but then what fun would that be?

What do you do that scares you?  Any swim tips for me?