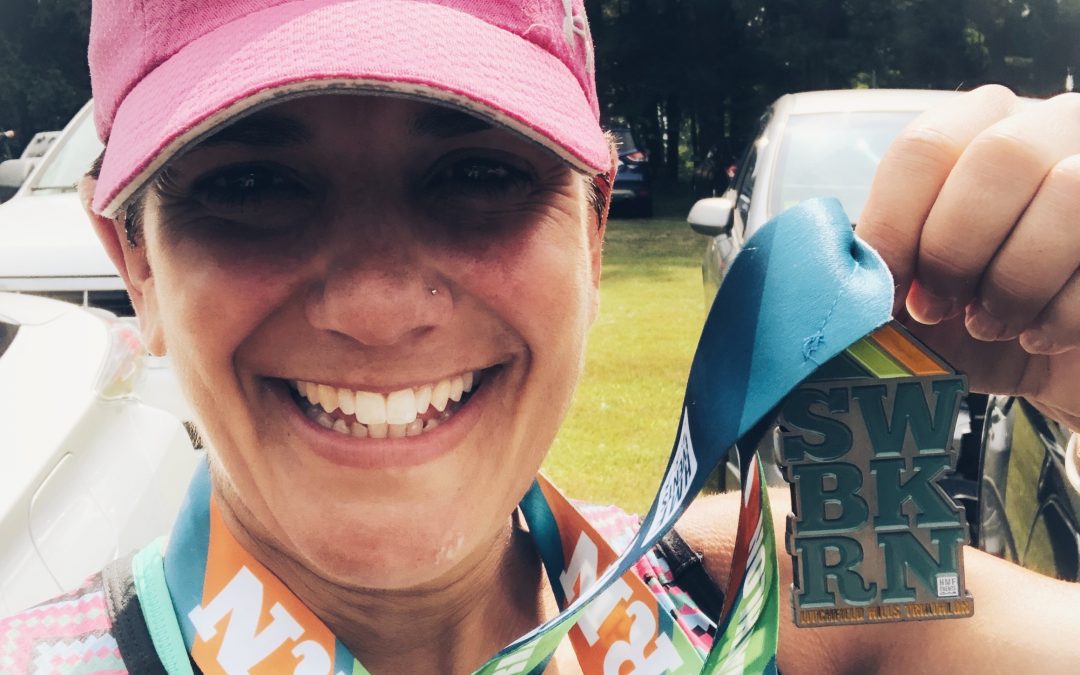 It was a bit unexpected, but not totally unplanned, when I found myself on a beach at 7:00am last Sunday morning ready to race the the Litchfield Hills Olympic Distance Triathlon. I had a score to settle with this triathlon since I DNS’ed (did not start) it last year which was the first time I had ever signed up for a race and not even attempted to do it.

The Olympic distance triathlon is a 1 mile swim, 25 mile bike and 6 mile run. The weather sucked and, as the name blatantly warns, it’s hilly as all hell. In fact, in the final miles of the run I was asking myself why I can’t find a nice FLAT race somewhere just once? But, I also love a challenge, so let’s see how this one played out. 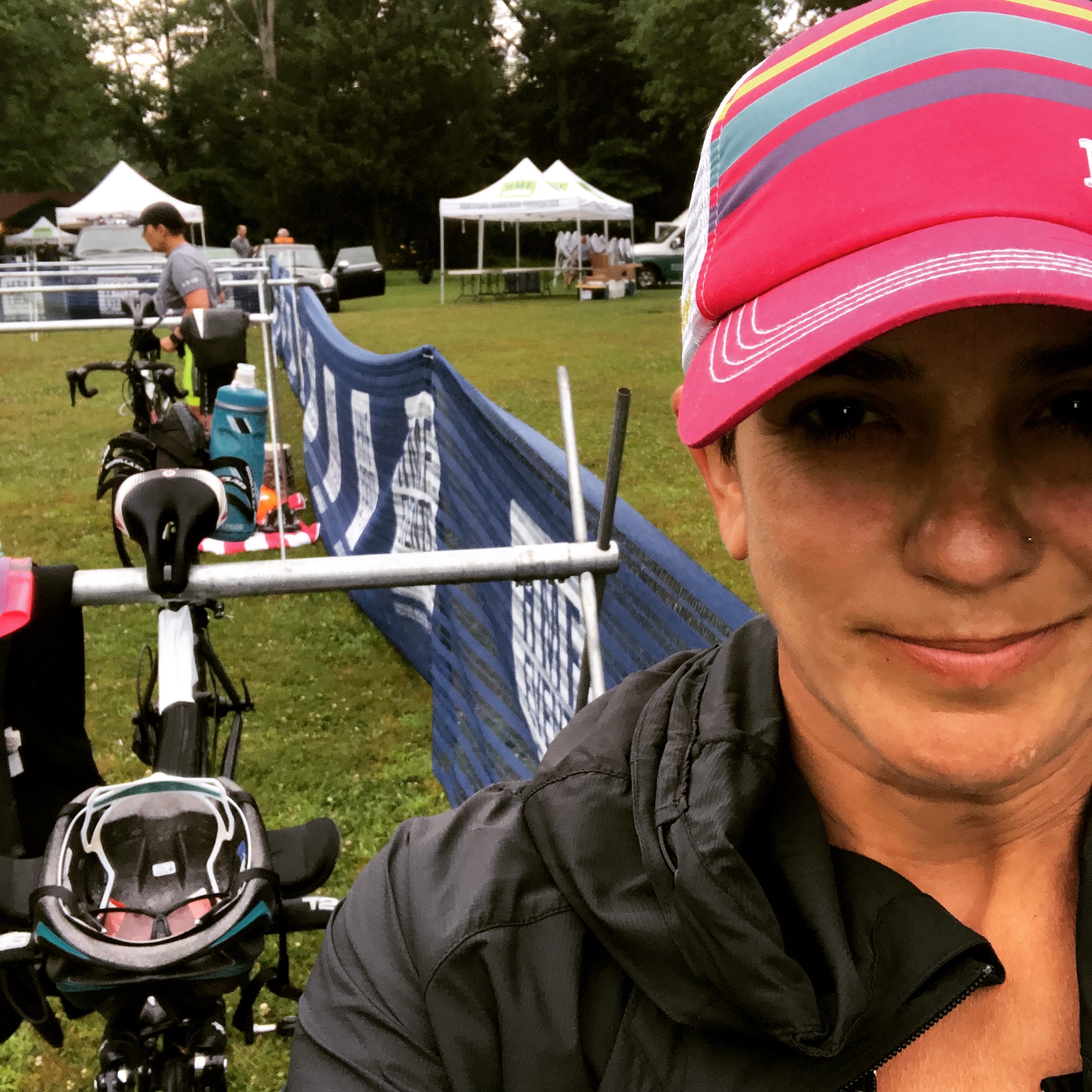 Transition is set and I’m ready to rock!

I was closely watching the forecast (as one does) for race morning and the expected thunderstorms looked like they would hold off until after the race, but the heat and humidity would hit early and last all day. I knew the temps would really only affect the run so I set my alarm for 4:15am and slept like a baby.

It’s important to note (mostly for my ego) that I was not tapered for this race. It wasn’t a goal race but a training race, which seems like bullshit, but it’s really not. If this was a goal race for me I would not have done a 40 mile bike ride the previous Thursday or an 8 mile run and 2,000 yard swim the previous Friday. To say my legs were not reseted was an understatement.

I will say I felt calm going into the race and decided to race hard but just to have fun, no matter the results. < – – this never seems to work for me…did it this time?

Ah, the swim. My most hated part of any triathlon yet, I love how much it challenges me and how accomplished I feel running out of the water.

This is where I need to take a step back and remember when the olympic distance triathlon terrified me. The thought of swimming a mile in open water would cause me to panic for days leading up to a race. If you have ever stood on a beach in a wet suit, looking out onto a marked buoy course with your heart pounding, you know what I’m talking about. It always looks WAY too far and your mind screams “I can’t swim that far!” but then, somehow, buoy by buoy, you do it. And then you do it again. And again. Until you say, like I did on Sunday, “I got this.” Huge accomplishment for me. 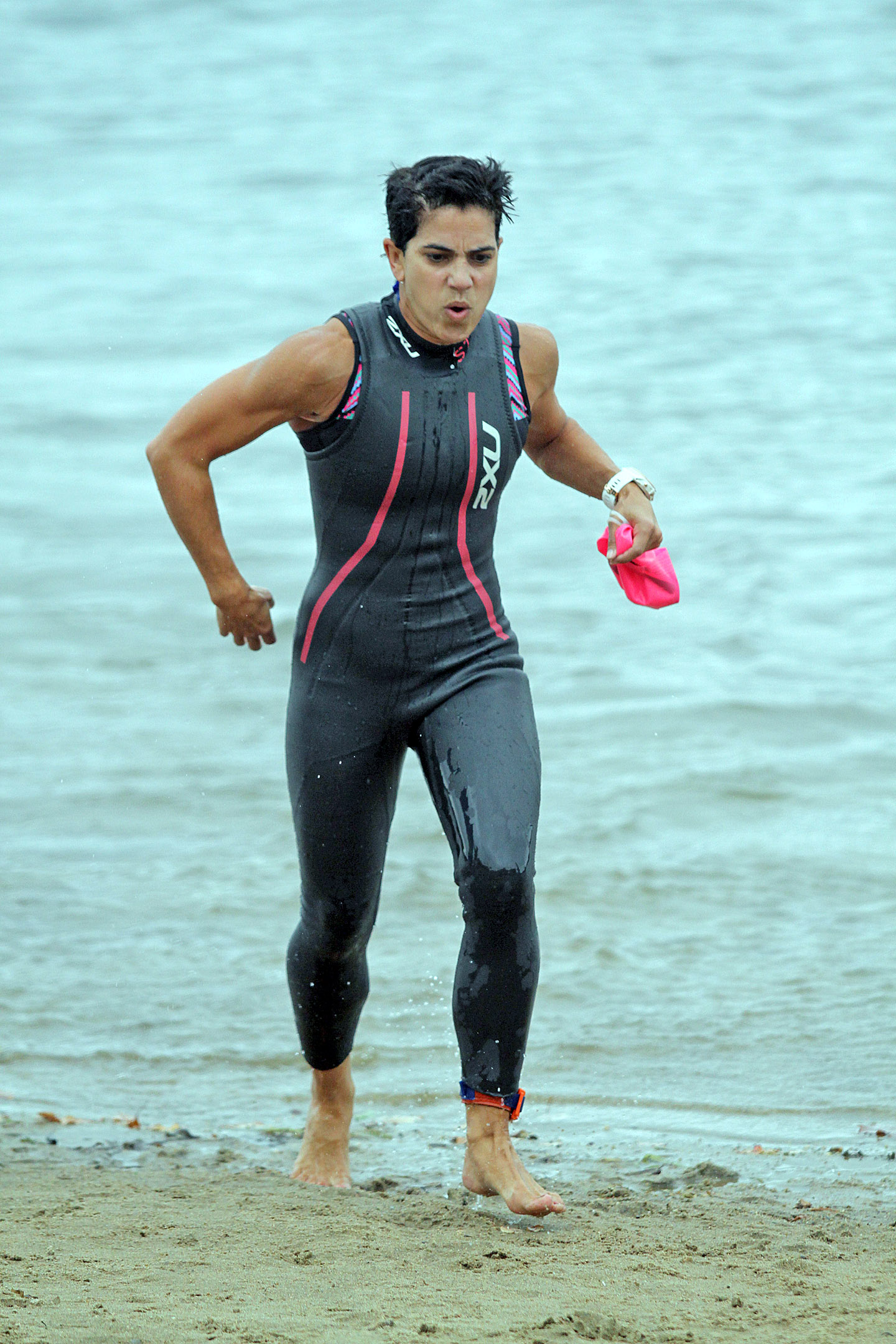 Racing out of the water at the Women’s Triathlon two years ago.

Luckily for me, the swim was wet suit legal. If the water temp is 78 degrees or above, you cannot wear a wet suit which gives you more buoyancy in the water and just makes you feel like you have a super suit on. Or maybe that’s just me?

I swam a warm up like a good triathlete and when it was time for my wave to enter the water, I was ready! The only issue I had was somehow swimming at almost the exact same pace at two other women almost the entire time, and I was in the middle! This has never happened to me before and it was super annoying. I finally managed to break free with about 500 yards to go but ugh.

The ridiculously awful thing about this transition was you had to run more then a quarter mile, uphill, on a gravel and dirt road to get to transition. Yeah. The worst.

Luckily my coach knew and warned me about it so I had an old pair of sneakers waiting for me when I got out of the water. I slipped them on before I ran up the road to transition which is why it took so long!

I also made sure my timing chip was on my ankle before I left transition so I didn’t have a repeat performance of my 70.3 a few weeks ago!

Again, I knew the bike was going to be super hilly, especially in the later miles, but I was ready! I felt like 25 miles was a breeze compared to the training I had been doing (and my last race!) and I’m always riding hills so I was confident. The only issue on the bike was the condition of the roads. OMG they were awful in so many spots that I’m just thankful I didn’t blow a tire. 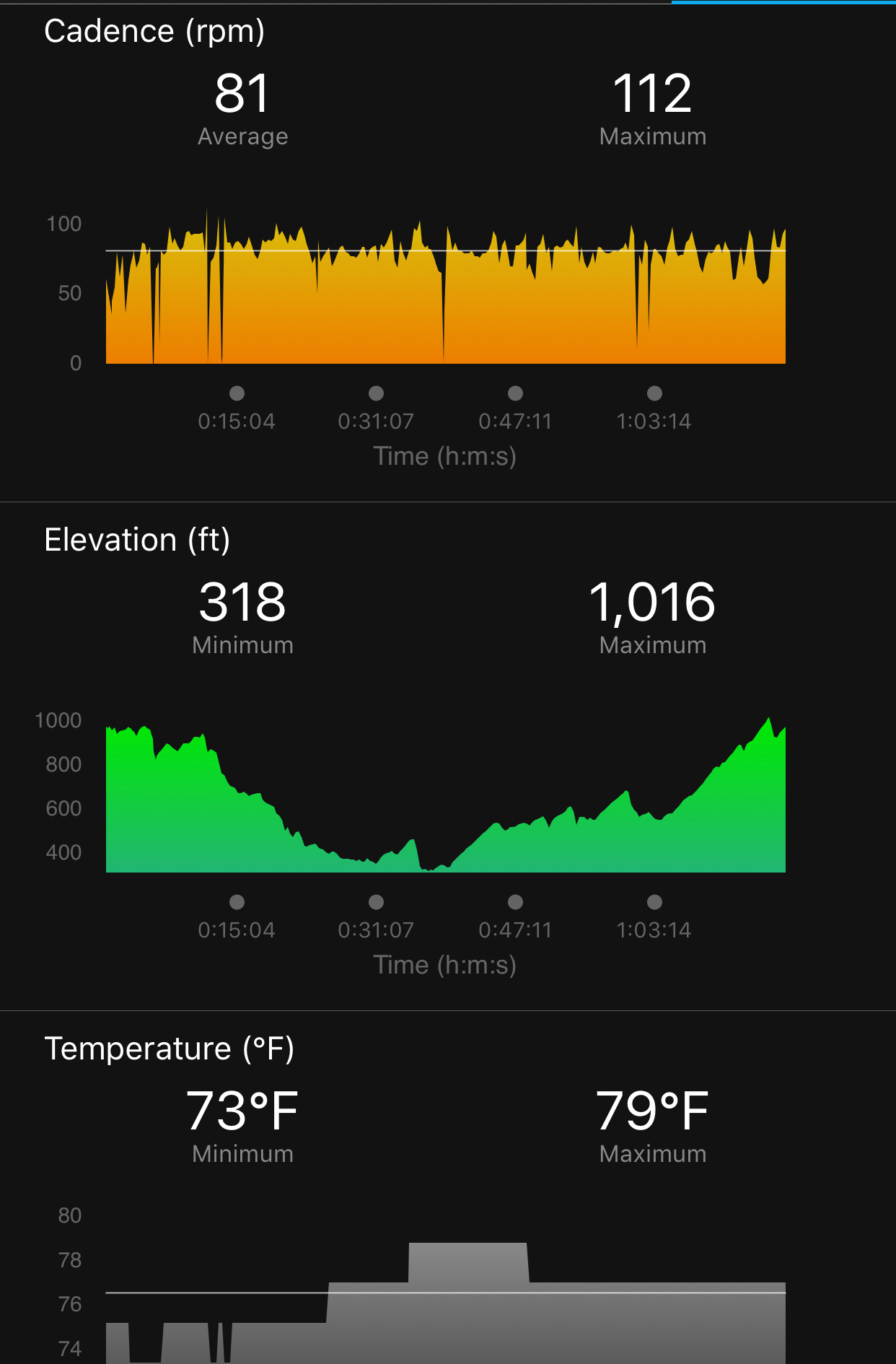 I would also like to thank the drivers of Litchfield, CT for not killing me (or anyone else) while I swerved around pot holes and other riders, out into traffic, on a very busy road. #priorities

We only had to travel uphill over some dirt and rocks for a few yards before hitting the grass into transition. No small task while managing a bike and wearing bike shoes…oh and after riding for almost an hour and half.

This transition, as usual, was quick and painless…until I started thinking about what’s next!

A surprise was volunteers yelling to everyone running out of transition that the course was almost a half mile short! What? I yelled back “Oh God bless you!” since I already felt like my sweat was sweating. < – – that’s how hot and humid it was

This used to be my favorite part of the race. I have to say that cycling is starting to take the lead on this, especially when it’s hot, humid and hilly. #whoamI?

I had to talk to myself through every single mile. I was hanging on dearly to the fact that the course was short but I was in my head for each and every step. I was also dousing myself with water at every water station which felt incredibly good and gave me something to look forward to! 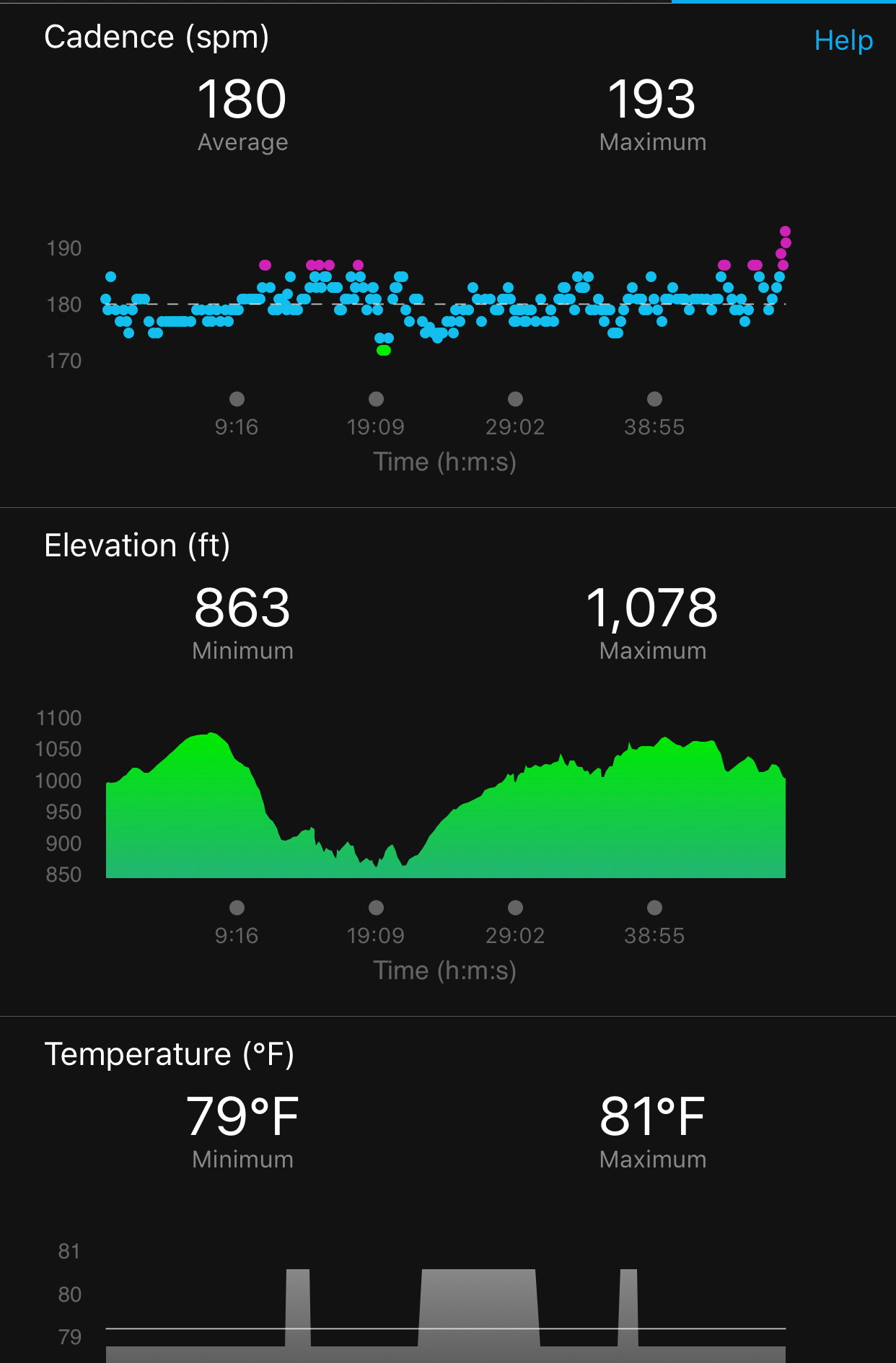 I had no clue what the run course looked like, other than “it’s hilly” which is usually not a good thing. In this case, I didn’t mind not knowing how many hills were between me and the finish, I just kept moving forward and vowed to run every hill until I was done. 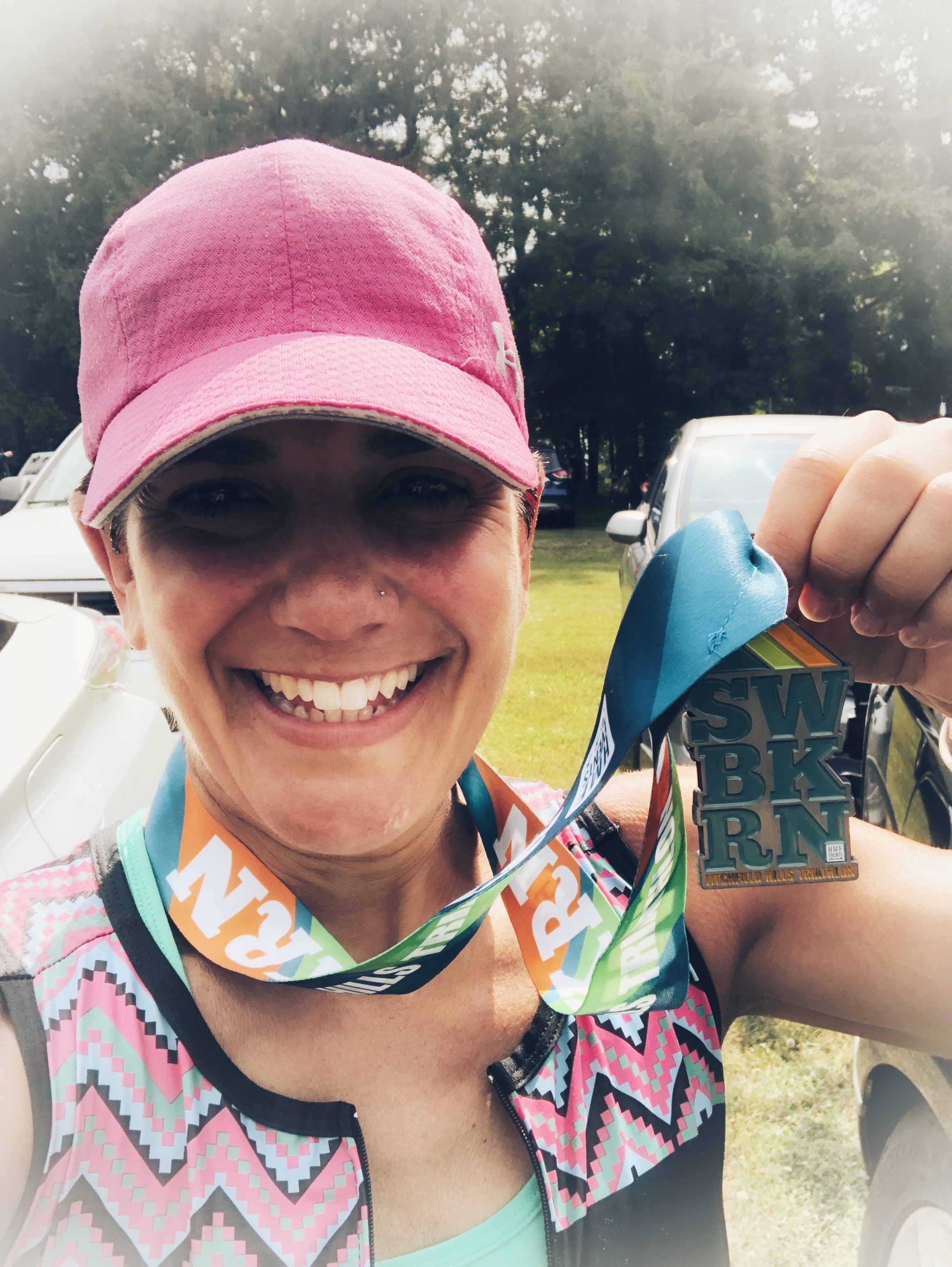 Almost immediately after crossing the finish line, I packed up my transition stuff, piled it all into my car and drove home. I felt good about the race and how my physical and mental game played out. I kept thinking about where I was at that time last year and I felt really good about myself and my fitness. I didn’t want the results to mess with my head, so I didn’t bother checking them and instead, I just drove back to my family.

Of course, once I was settled in and had two celebratory beers and a burger, I checked the results:

I definitely have a lot of room for improvement, especially on the swim, but I’m completely satisfied with the results of this race and feel good about where I am in my training right now.

I have no idea what I’m going to do next so, for now, I’m going to (try really hard to) enjoy the present. We’ll see how long it lasts…

[Tweet “It’s all in the name: Litchfield HILLS Triathlon! Read the #race recap with #VITA”]

Have you ever had a “revenge” race? What happened?

How do you run though heat and humidity?

What is your super suit?