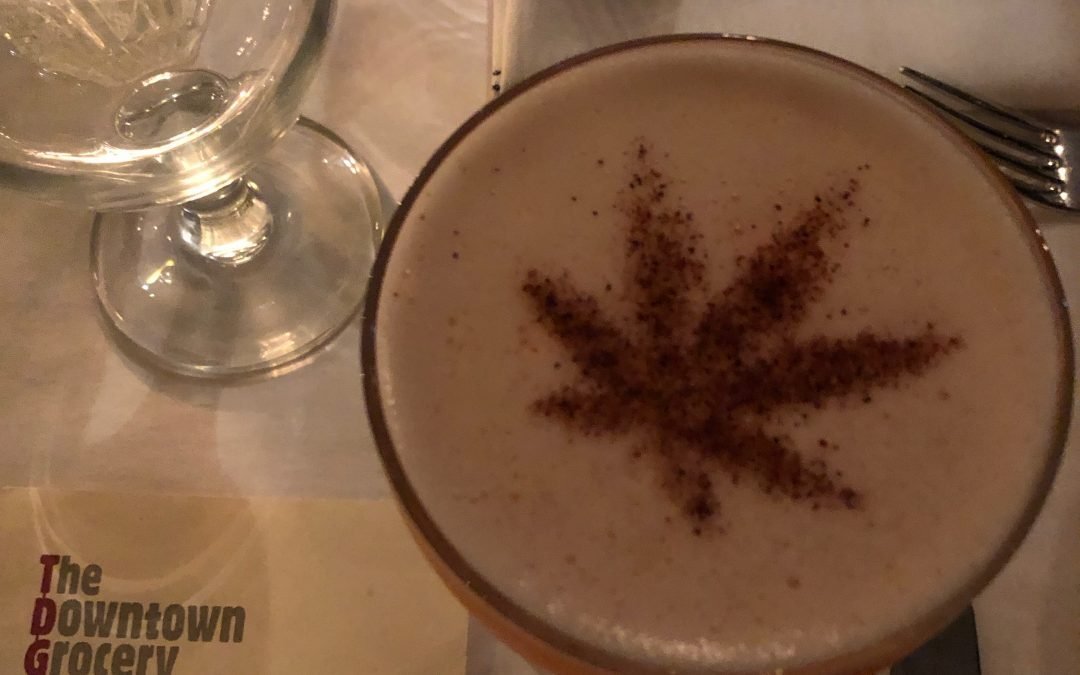 It should not be too shocking to read that I’m experimenting with cannabis. I’m desperately trying to find something that will suppress my amygdala when flying and keep my anxiety, and the accompanying panic attacks, at bay. And I also just want to get high sometimes.

The sale and use of cannabis (weed, marijuana, pot, reefer, etc.) is legal in the state of Massachusetts which is a mere bike ride away from where I live in Connecticut. I did not ride my bike (thank God!) but drove with a friend of mine a few weeks back, to check out a dispensary in Northampton. We’ll call my friend ALICE to protect the innocent.

The NETA dispensary building is a very antiseptic looking structure and I felt kind of like I was doing something wrong and also very right. Police were outside, under the guise of directing us where to park, and we waited in a brief line before showing our IDs and entering the building. Once inside there was another line and we were given color menus of options and pricing to browse while we waited for our turn.

Never in my college pot smoking life did I imagine I would drive my family SUV to a place where you could buy any kind of weed you wanted, in any form — gummies, chocolate bars, suppositories — dispensed in a bottle and not a plastic baggie. It’s about time. And yes, you read that correctly, suppositories. And no, I did not try those, nor will I ever, no matter how bad my panic attacks get. #boundries

When it was my turn at the counter, I felt nervous. The stigma of buying cannabis is strong and it was unbelievable how uneasy I felt about the whole thing. I know it’s legal, I know it’s better than some (most?) pharmaceuticals but the stigma is too much to overcome all at once.

At the counter I was again asked for my ID. I produced it and, for some reason, said “I just dyed my hair blonde” to which he replied “it still looks like you.” WTF is wrong with me? Now I know how Baby felt when she told Johnny “I carried a watermelon” in Dirty Dancing. Ugh.

He must have figured I was already high and continued our transaction. I told him I wanted something for anxiety, particularly for flying, and something to help me sleep though the night when I can’t. He very professionally and expertly walked me though a few different options with various ways of ingesting the THC and at various prices. I decided on edibles for the anxiety (I don’t want to smoke!) and a tincture of oil for sleep. The total was about $100, my cannabis was put inside a sealed bag, and we were out the door.

I’ve been told that the Las Vegas experience is much more fun, with a lot of the edibles and oils on display so you can see what you’re purchasing. Leave it to the Northeast to suck the fun out of even buying weed.

“Alice” and I wanted to roam Northampton, shop and have lunch, before driving home. Since we were spending all afternoon there, I decided to sample a gummy. Each one is 5mg and, even though that is a very small dosage, I decided to be careful and only bite off the top half, which was even less than half the gummy, which I took to equal about 2mg. The directions strongly suggest taking a small amount at first and then wait two hours noting, “you can always take more but you can’t take less.” Amen.

In almost exactly two hours and while eating lunch, I became instantly high. There was no slow start or feeling “off” I was just eating a bite of salad and BAM – high AF!

Somehow I kept up my end of the conversation, paid the bill (which seemed incredible to me at the time!) and walked out of the restaurant. At that point I turned to Alice and confessed.

“Um, I am SO high right now! There is no way I can drive home. We need to just walk around for a while.”

She laughed her ass off because she is a good friend.

I was so high…

After about two hours I was still very high and starting to panic about having to pick my kids up from summer camp in four hours. Alice said there was no way I would still be high in four hours and I handed her the keys to Claire (my car). Also, she was wrong.

The drive home was interesting. I would sometimes be able to hold a conversation and then I would just burst out laughing. I contemplated all the different places I could go, thinking home was not one of them, but there was no other place to go and, by now, I had about two hours before I had to pick up my kids…or someone had to because it was clear I could not.

I called my husband on the car bluetooth. I immediately burst out laughing at the sound of his voice and he knew what was up.

Me: I’m SO high and it’s been hours! You NEED to pick up the boys!

Him: *hysterically laughing* you are too much and this is one of the funniest things you’ve ever done. Also, I knew this was going to happen.

He spent the rest of the conversation talking to Alice and hashing out the details of her driving me home, picking up the kids and then having everyone over our house because to Alice and my husband, this constituted a party. Apparently I was the only one who was worried.

At about 7:00pm I started to feel like I had expected to feel when I first ate the edible – relaxed, quiet, contemplative and at ease – it only took six hours! And I was still feeling high when I woke up the next morning. I shit you not.

During my cannabis-induced haze I had several revelations:

It was very cool to have a different level of consciousness for the day and to get some perspective. Being high is not at all like being drunk. It’s a completely different feeling and impossible to explain. And, the next morning, although I still was not myself, I felt great and the opposite of being hungover. I was super relaxed most of the day although I did have some issues concentrating! Also, I ended up running all 13 miles (half outside and half on the treadmill) and it was more enjoyable than usual.

When trying to sort out the mystery of why I had such a strong reaction to such a low dosage, we theorized a few things:

Coincidentally, around the same time this happened, I started reading Michael Pollen’s book “How to Change Your Mind.” It’s incredibly interesting and talks about how scientists and doctors are resurrecting the work done in the late 50s and 60s with hallucinogens. Experimenting with psilocybin (mushrooms) and giving controlled and supervised doses of the drug to people who suffer from anxiety and PTSD to Alzheimer’s and schizophrenia. The results have been extremely positive.

After the day I had, my mind was definitely more open and willing to change.

The biggest reason I wanted to write about this is because I want to do my part to eradicate the stigma surrounding cannabis/marijuana when it comes to using it for medical purposes. For years I took xanax to fly and it would leave me exhausted, clouded my thinking and was a temporary fix because it mostly only helped me sleep, and then ruined the rest of my day.

Obviously there is a crisis in this country with opioid addiction and overdoses and only now, after tens of thousands of people have died, are we holding pharmaceutical companies accountable. I’ve never been a fan of prescription pills and now that there is a viable alternative, I want to take full advantage of it.

At the very least, I want my doctor to have the choice of prescribing me plants or pills and, after attaining my master’s degree in counseling, I would also like the choice of giving my client’s an alternative to pharmaceuticals. I already plan on including things like meditation, reiki and acupuncture to my walk/run therapy sessions as a way of treating the whole body and utilizing the mind/body connection. Cannabis may be just one more way of doing that.

Not to get too nerdy or preachy but recent research from The University of Georgia found that areas with medical marijuana dispensaries had a reduced number of opioid overdoses. And, another paper published in the Journal of the American Medical Association, discovered states with forms of legal marijuana reported a 25% lower annual average opioid death rate. These are just two examples out of many on the positive effects of legalizing cannabis and I’m sure they will only continue as more states get on board.

I have to get on a plane in a few weeks so I need to figure this out. Until then I’m keeping an open mind about everything.

I’ll leave you with this great summation from Paul Bruce, a lead researcher and assistant professor at DePaul University as quoted by the Chicago Tribune:

“One of the most compelling things to come out of this is that people are taking control of their own health, and most providers would agree that’s a good thing.” However, he warned of limitations: “The lack of provider knowledge around what cannabis does and doesn’t do, the difference in products and ingestion methods and dosing, is all kind of a Wild West.”

Have you tried cannabis? Is it legal in your state?

Would you consider using cannabis over other pharmaceutical drugs?

Have you heard of these treatments with mushrooms and LSD as alternative medicine for serious illness?