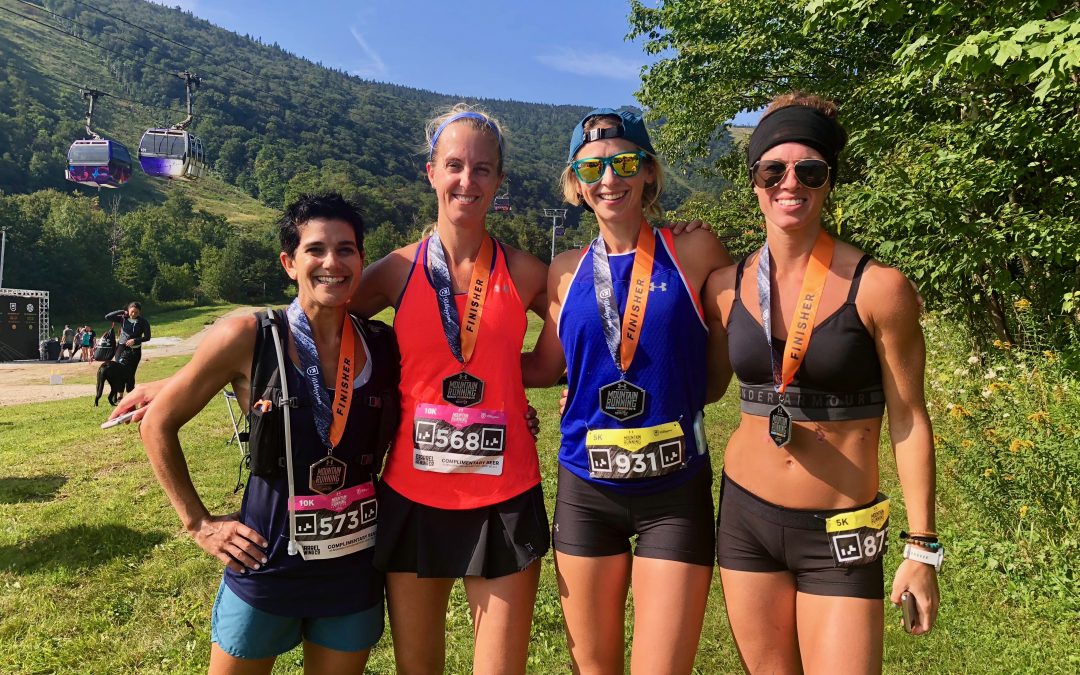 That pretty much sums up the Under Armour Killington Mountain Running series this past weekend in Vermont. I had an absolute blast racing, running, slow jogging, sliding, side stepping and walking up and down the murderous trails of Killington mountain this past weekend and I cannot wait to tell you all about it…mostly because sitting is my friend right now. 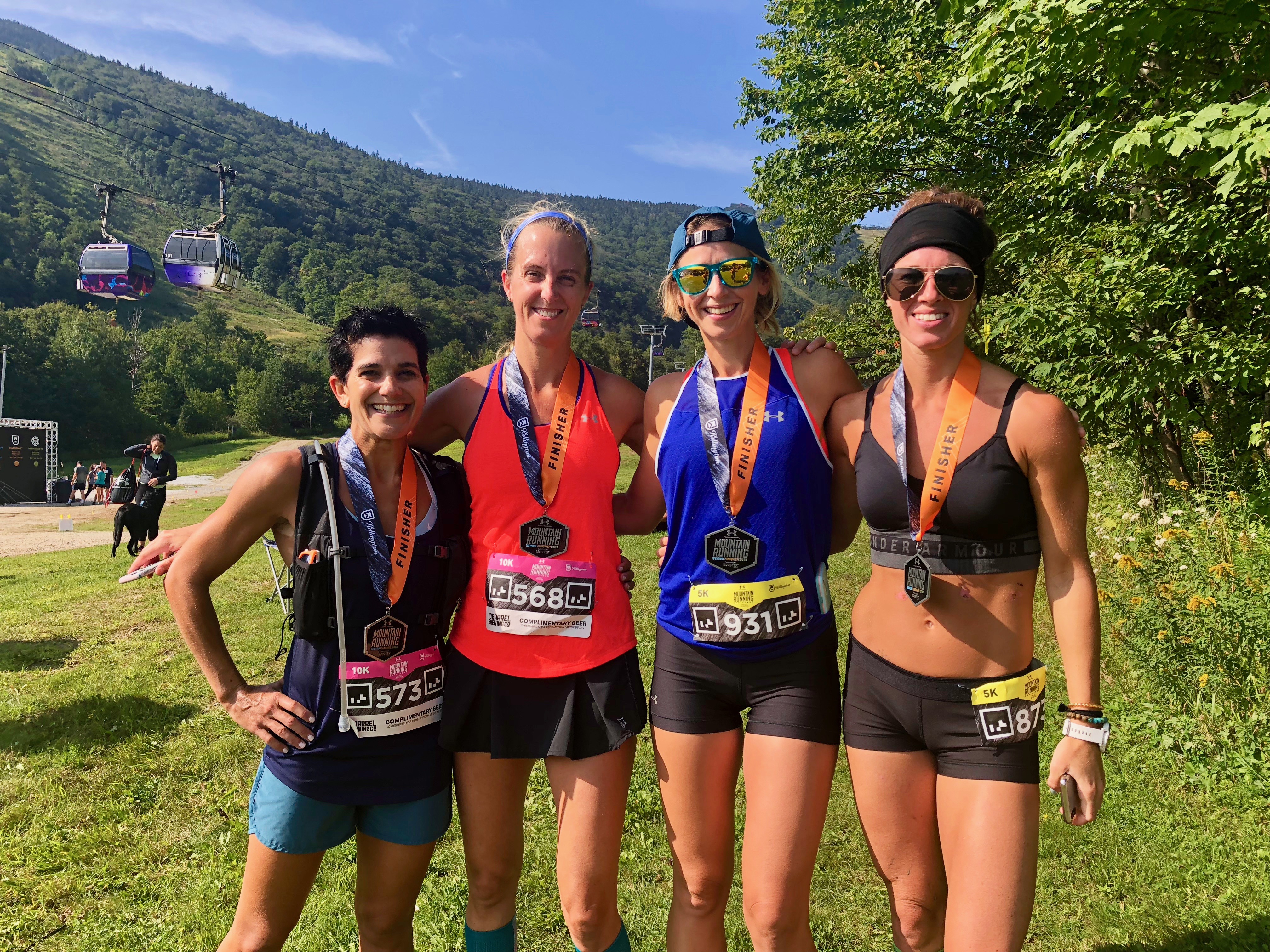 Me, Sandra, Sarah and Crystal after the race. Am I really this short or are they all super tall? Don’t answer that.

I wanted to have some fun, get out of my comfort zone and race something that didn’t take over 3 hours with tons of equipment. The Killington trail race series fit the bill and then some because I had the bonus of hanging out with some of my best blog friends and being able to take my husband and the kids. 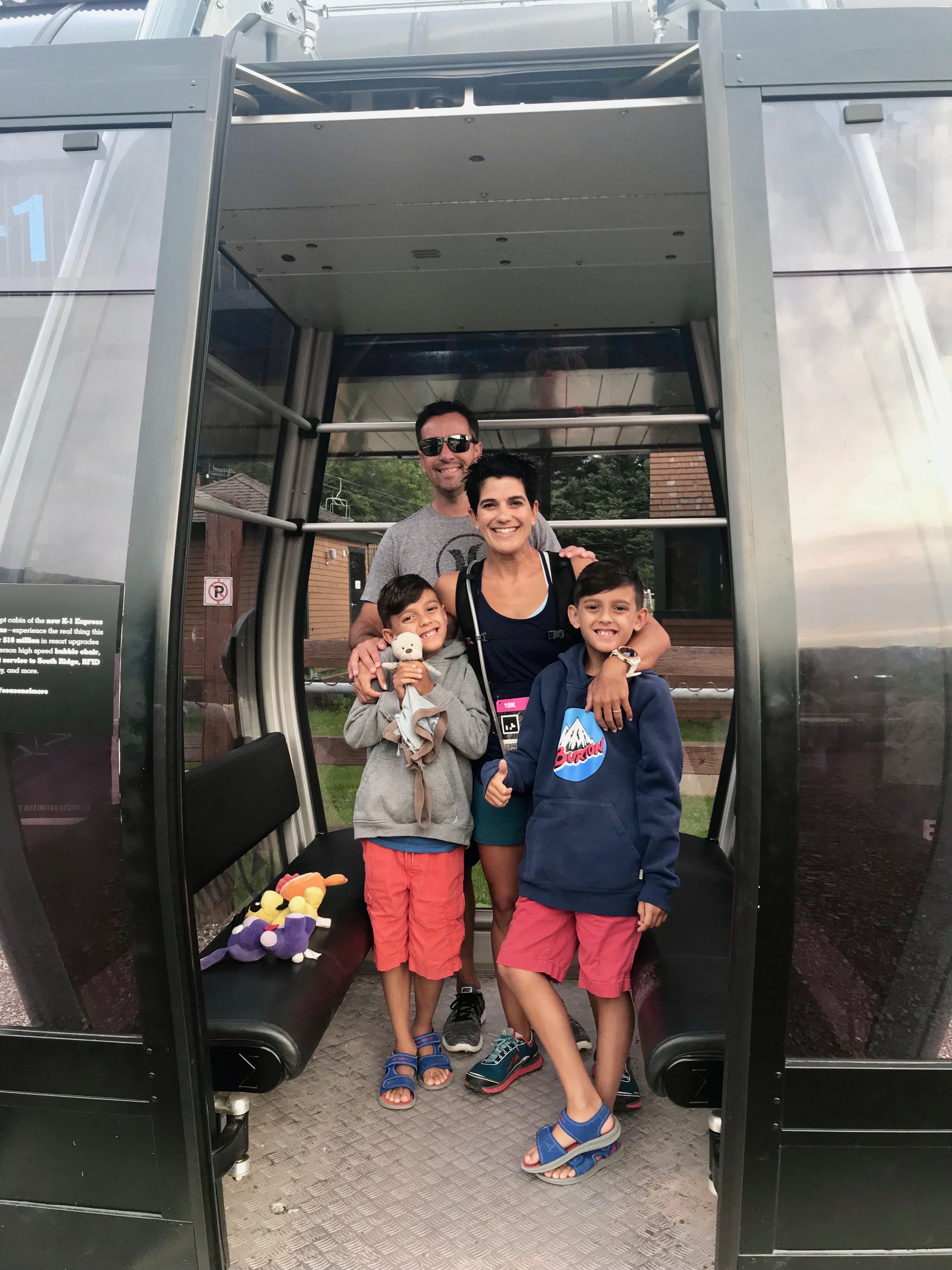 No one even complained when I woke them up at 5:45am on a Saturday!

When I asked Sarah for suggestions about the race, I told her I was looking forward to having my ass handed to me in the best way possible. What I was expecting and what actually happened changed throughout the race. I’m recapping for you based on what I thought would happen vs reality, and there were quite a few surprises.

What I thought might happen: Everyone would complain about waking up early and would maybe even opt to stay home.

Reality: There were grumbles for sure but no one complained and the kids talked non-stop in the 40 minutes it took us to get from our condo in Ludlow to the base of Killington. They played/wrestled in the gondola while I chatted with Sandra and Sarah before the start. My husband took them to breakfast (there are dozens of places to eat in the area) while I started the race. It was one of the easiest starts to a race ever and I was super happy to be surrounded by friends and family!

The race was extremely well organized and, even though there were about 700 runners, there were four different distances (5k, 10k, 25k and 50k) with staggered start times so there was no crowding or long lines for anything, including the INDOOR bathrooms. Always a bonus!

What I thought might happen: It would be grueling from the start and everyone would be an expeirened, serious trail runner (except for Sandra and I) and I would be dying within the first mile wondering why I ever thought this would be fun.

Reality: It was great from the start and I was in the perfect mood to take whatever the mountain was going to throw at me.

Sandra and I slipped into the starting shoot about 2 minutes before it was time to begin. The oddest thing was that no-one really wanted to be in front! I have never seen such tentativeness at a start line before and it was pretty funny.

I knew almost nothing about the course except the fact that the elevation climb would be grueling from mile 2.5 until almost mile 5 so I knew I needed to be conservative at the start and, most of all, to just enjoy it. 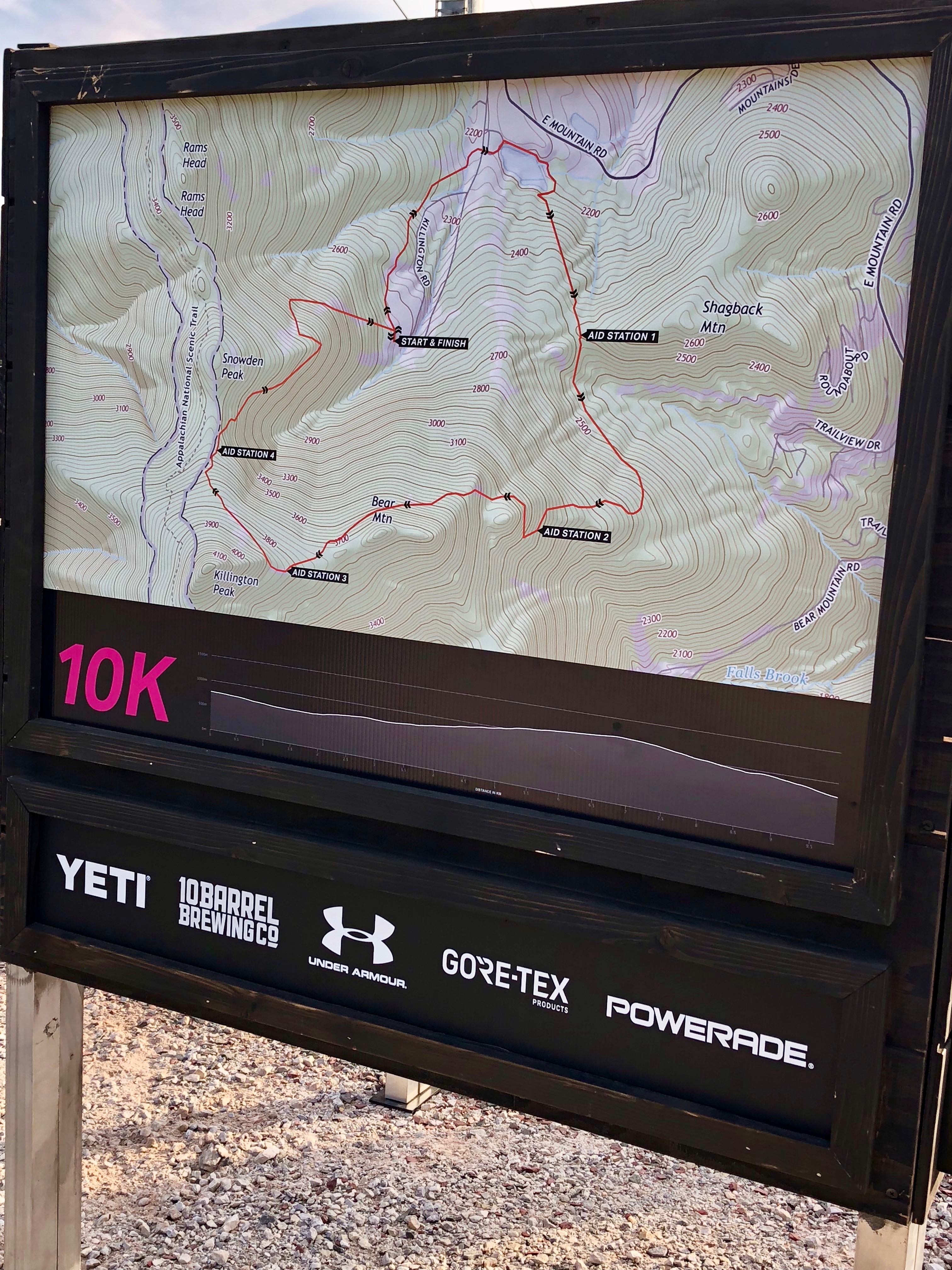 As promised the first two miles or so were downhill or flat with gorgeous views of the mountain. Everyone was very friendly on the course and I even chatted with some runners during the steepest climbs and we managed to have a few laughs at our own expense because seriously, who does this shit on a gorgeous Saturday morning? 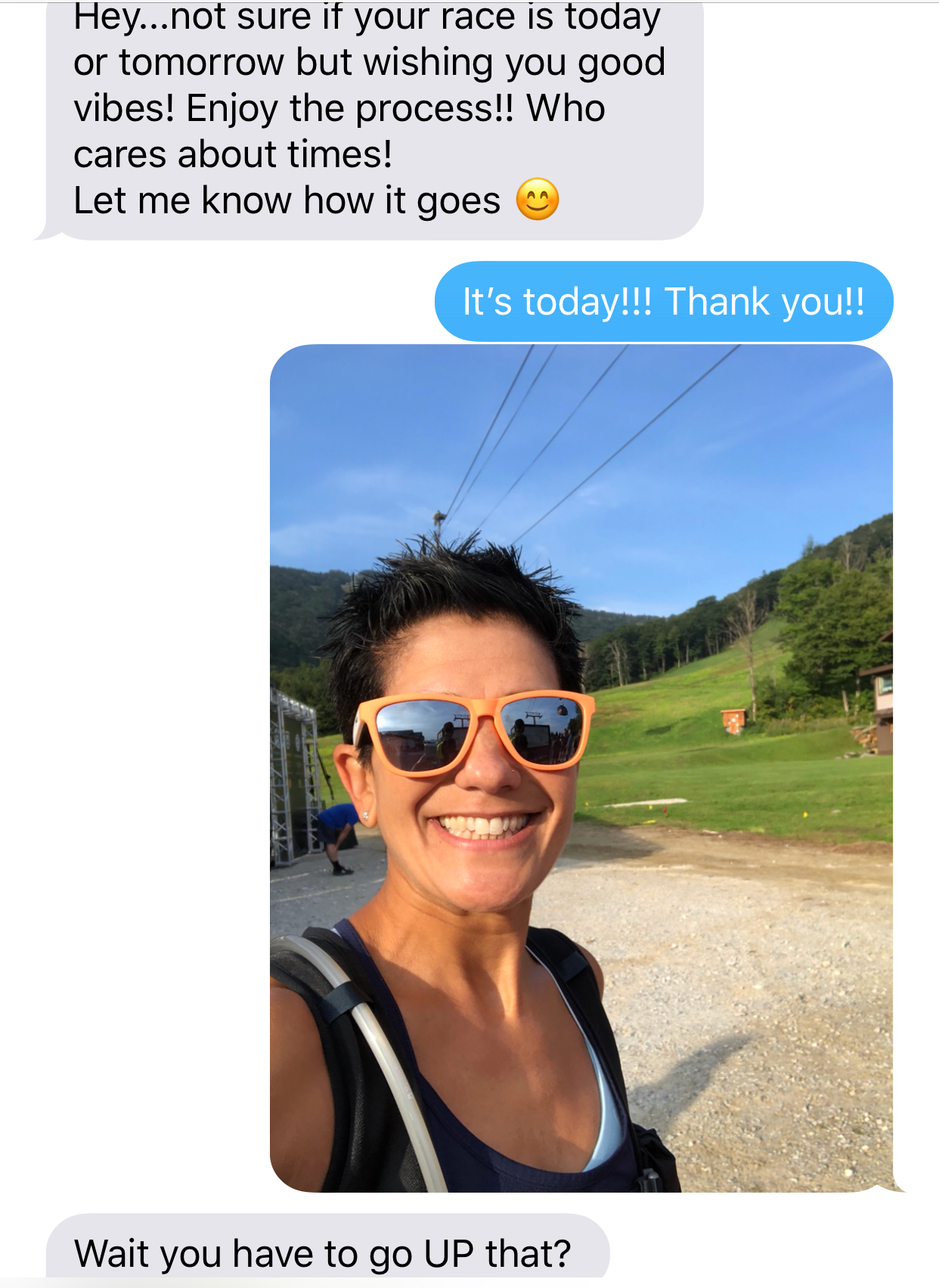 And, once we started to go up, it seemed endless!

The trail was not straight by any means so with each turn I would think “this is the top” and then there would be more climbing! I ran/jogged when I could and power walked the rest. I was passing quite a few people and feeling surprisingly good. I wasn’t anxious about getting to the top or getting frustrated with my pace but just taking in my surroundings, the absolutely perfect weather, and staying in the moment. Pure bliss.

Once I was positive we reached the top (and I know I keep saying this but the VIEWS!) we almost immediately started to go downhill and I mean DOWNhill.

What I thought might happen: It would be a quad crushing rush to the finish where I may end up in a heap!

Reality: See above, minus the heap. That would come the next morning (and the next) when I tried to walk down the stairs.

Just as soon as my legs and lungs were adjusting to the flat terrain, and relishing in the instant relief to the incessant uphill battle, I started hurling toward the bottom of the mountain faster than my legs and hips could turn over.

The worst part was there were rocks or all sizes, rutted terrain and mud…lots of mud and pools of water. All of this was on the course from the start, but now it was hazardous since I was rocketing toward it at what felt like 5,000 miles and hour while barely controlling my upper body. It was insanity!

Remember all those people I passed? Well, at least four guys over 6 feet tall, with limbs like slender man, came flying past me resembling a stampede on the African plaines! It was madness I tell you!

I held on for dear life, nearly slipped on a massive expanse of mud, almost twisted my ankle when I dared sneak a peak at the bowl to my right and then suddenly heard the beautiful noise of cowbells and an announcer – the finish line!

I mean, just look at this thing… And check out the max elevation of 5,329 feet! 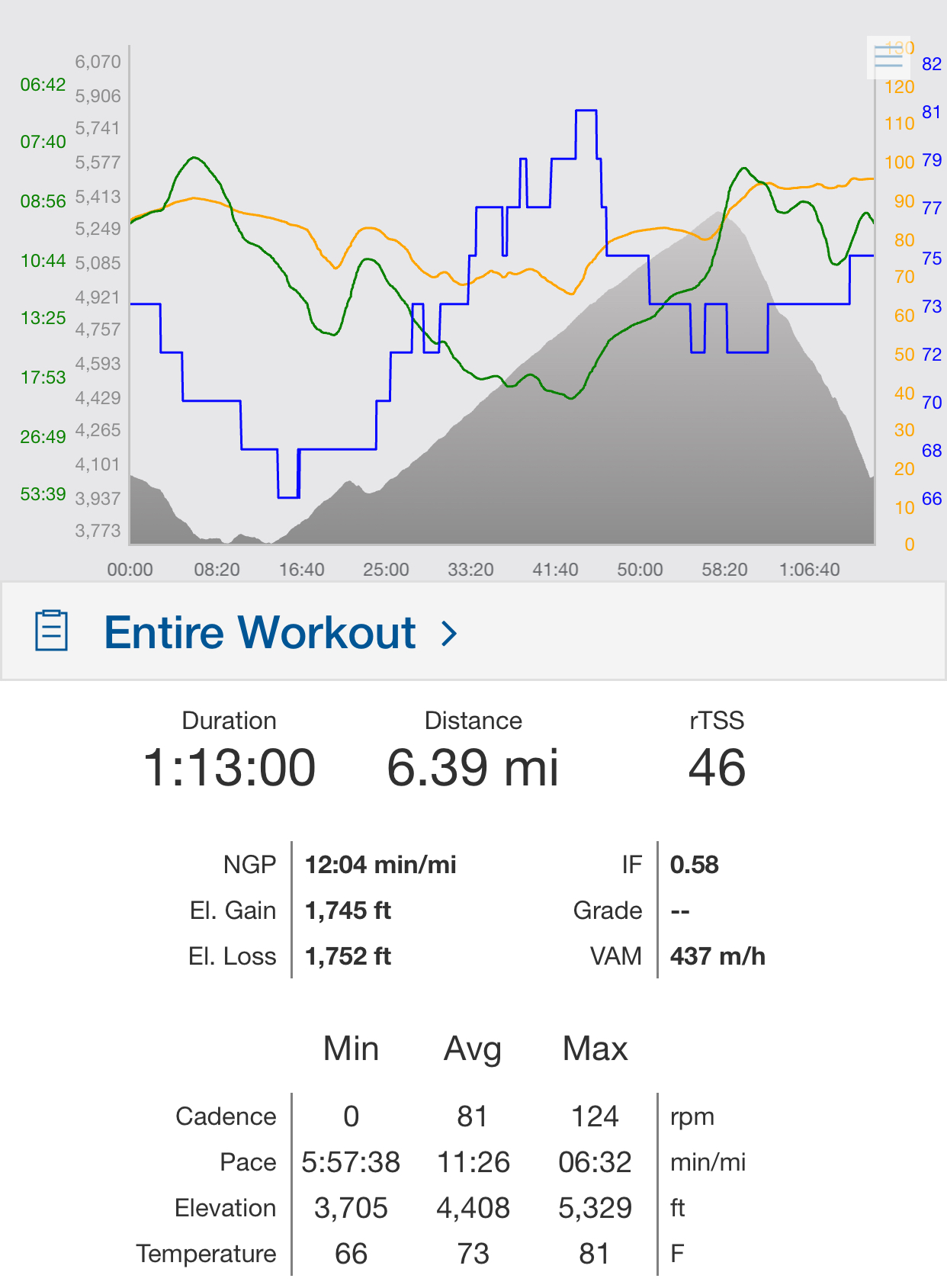 I saw my husband and boys from the last part of the descent and managed to wave both hands at them. They instantly saw me and starting jumping up and down…well, the kids did, somehow my husband held his enthusiasm in check.

I slapped both the boys’ outstretched hands and crossed the finish with a huge smile, prompting the announcer to say “look at that smile! This must have been too easy!” Oh hell no! I’m just so happy I did it.

Fist of all, I was just psyched to have completed the race feeling so good and truly enjoying the entire experience. I was pumped and immediately started making plans in my head for next year and all the people I wanted to entice to do it with me. My husband even said he would do the 5k so naturally I need to try the 25k.

A few hours later, after a great lunch with Sarah and Sandra, I was relaxing at the condo when I checked my email and saw this… 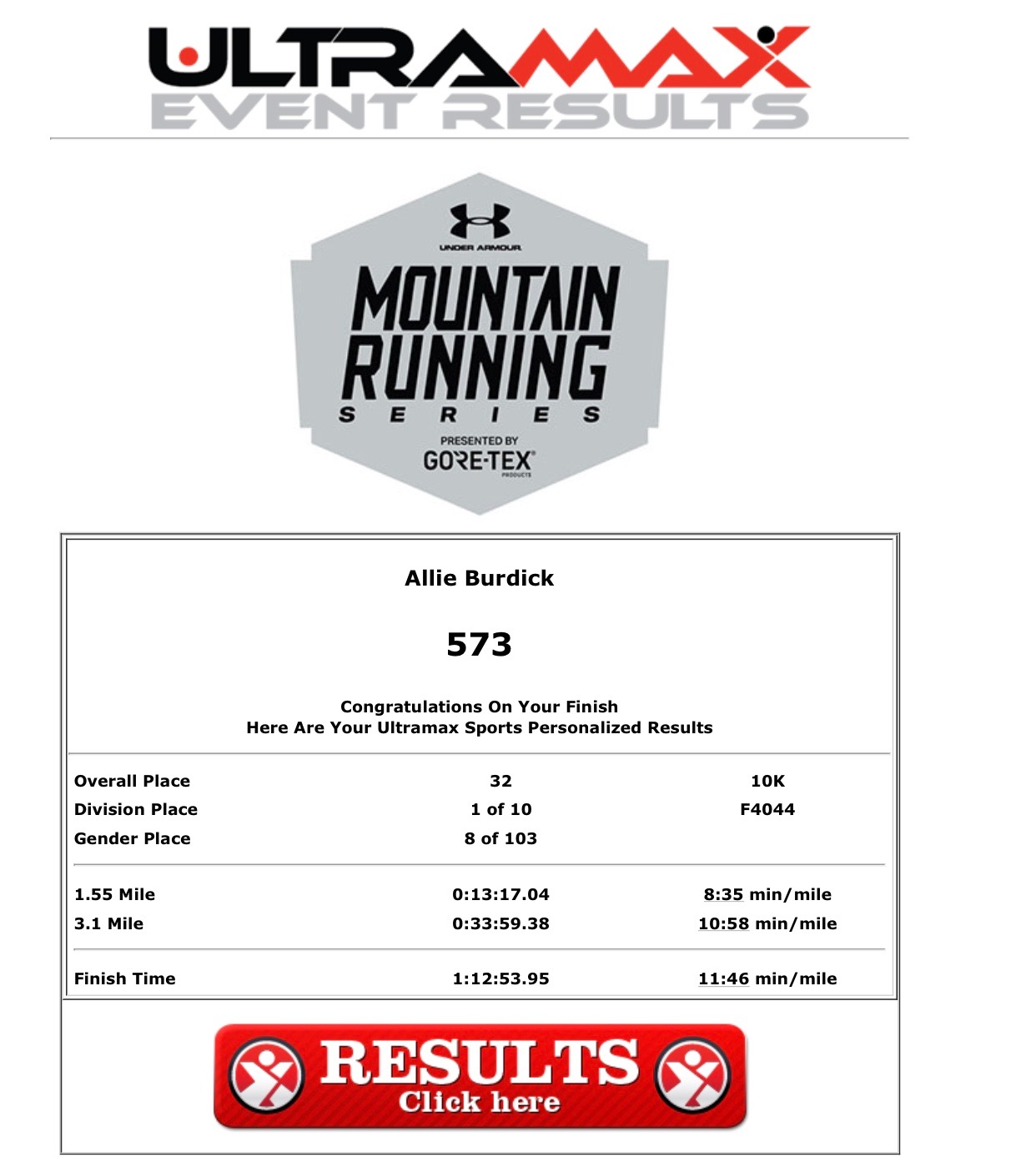 I was shocked! I won my division (Sandra came in 2nd!) and was the 8th out of 103 woman. I had zero expectation going in, had so much fun racing, and now this? It literally does not get better.

All I can say is, as soon as I can walk again, I’ll be looking for more trail races in Vermont this fall!

Have you ever done a trail race?

Have you ever had to walk sideways down the stairs after a race?

Wanna do this with me next year?