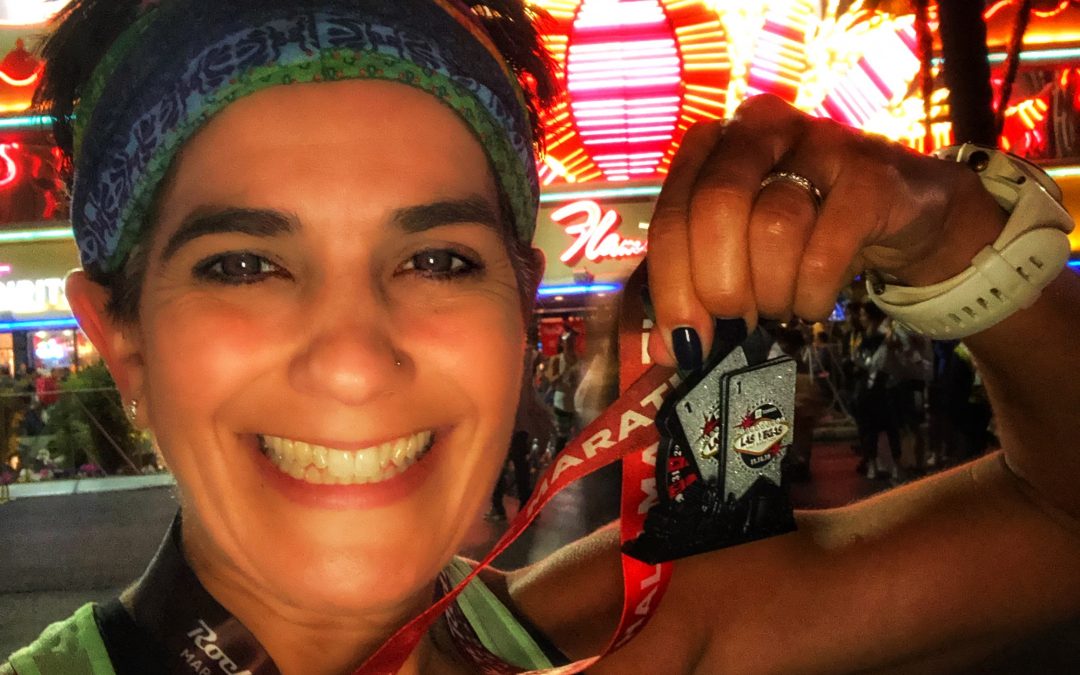 Bless me father for I have sinned. It’s been one year since my last Vegas confession and this one is a doozie! I confess to having way too much fun, way too many shots, laughing way too hard and hugging too many people…if that’s possible? I have zero regrets about my five days in Las Vegas and possibly only a few of the 13.1 miles I ran down the strip at night. Let’s discuss. 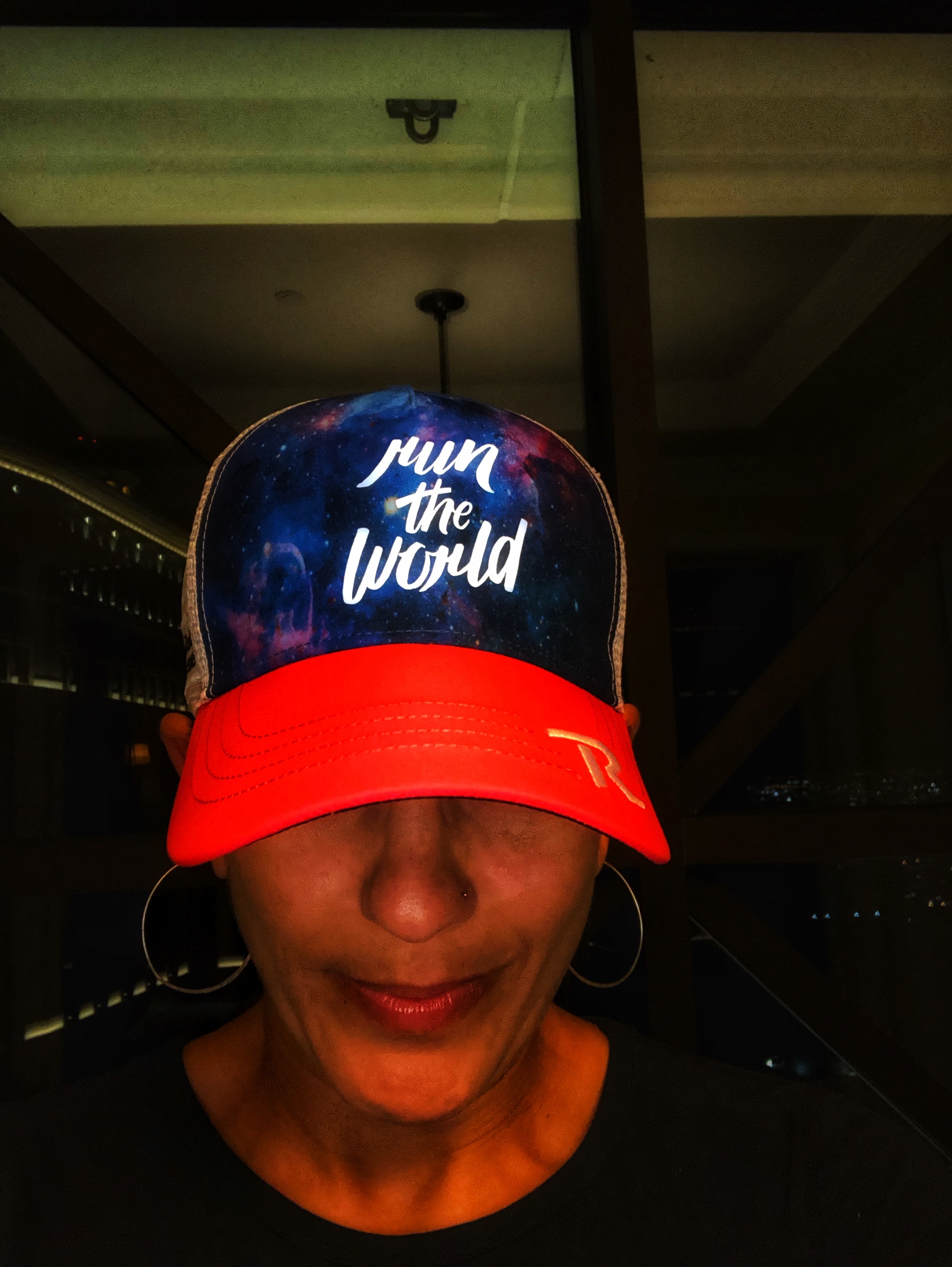 Who run the world?

As you may know, I was feeling fantastic throughout this training cycle. I was ready to tackle my third Las Vegas Rock and Roll Half Marathon but I also knew what spending three days in Vegas, prior to the race can do to race plans, and this year was especially rough. I’m not making any excuses and I take full responsibility for my actions (even the ones I can’t remember) but I’m just laying out the facts.

This year there was a bigger group of my friends and family in Las Vegas and I wanted to take advantage of spending all the time I could with the people who were there. Mission accomplished.

I usually feel like garbage on the one training run I do at the gym while at Caesar’s but this year I actually felt great! Everything went as planned getting to the race expo and with bib pick-up, which is always well organized, and my friend and I were feeling as good as we could about lining up to run 13.1 at 4:30pm on a Sunday, four days after we arrived. 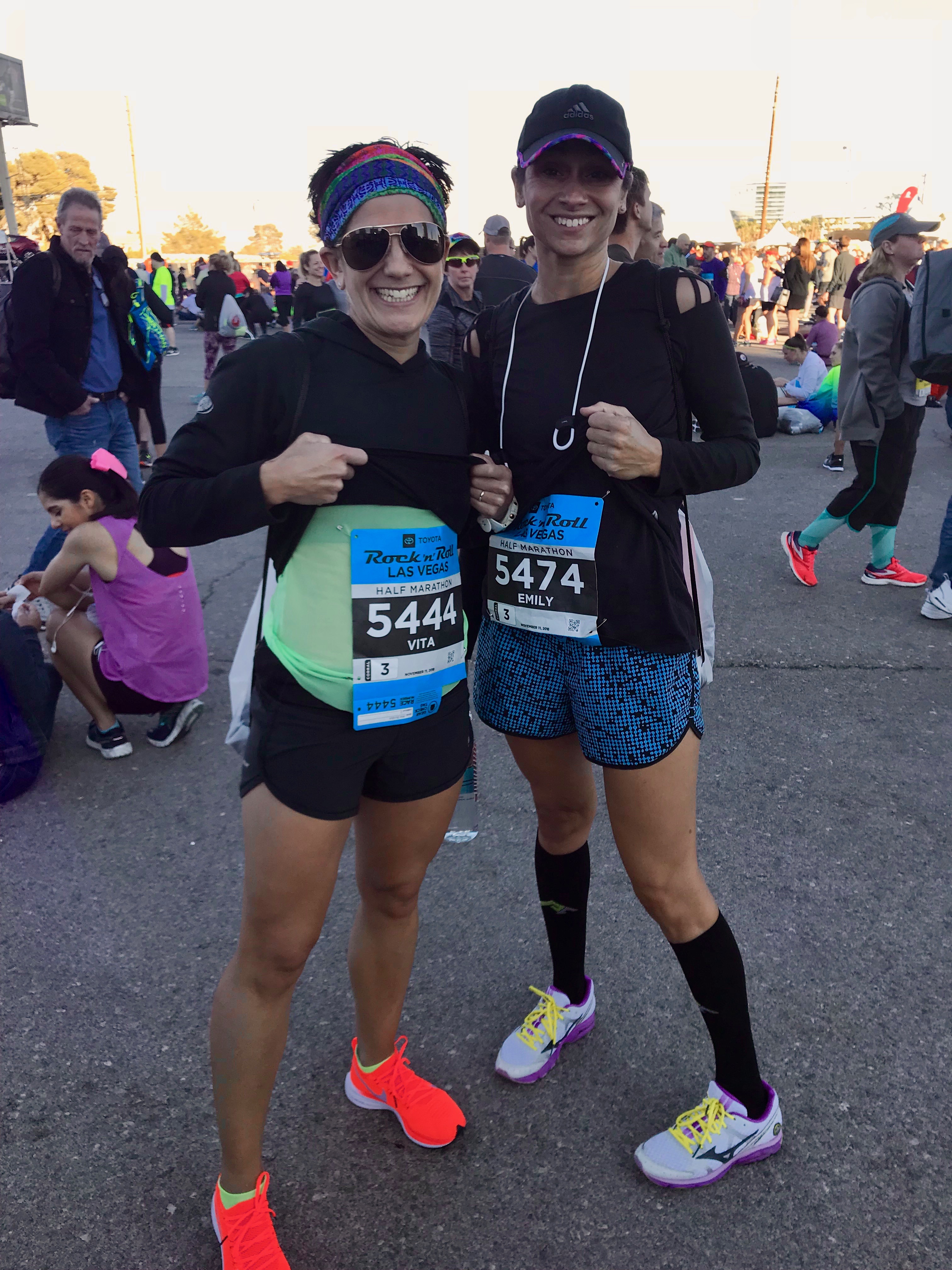 For the first time ever it was cold before the race. I have never even considered wearing anything but a wispy tank for this race but with temps “unseasonably cool” for Vegas (think mid-60s), and some strong desert winds, I was contemplating wearing my sweatshirt for the duration. Luckily, by the time I hit the first mile I was tossing it to the side of the road and ran comfortably for the next 12 miles. And by “comfortably” I mean I wasn’t cold. 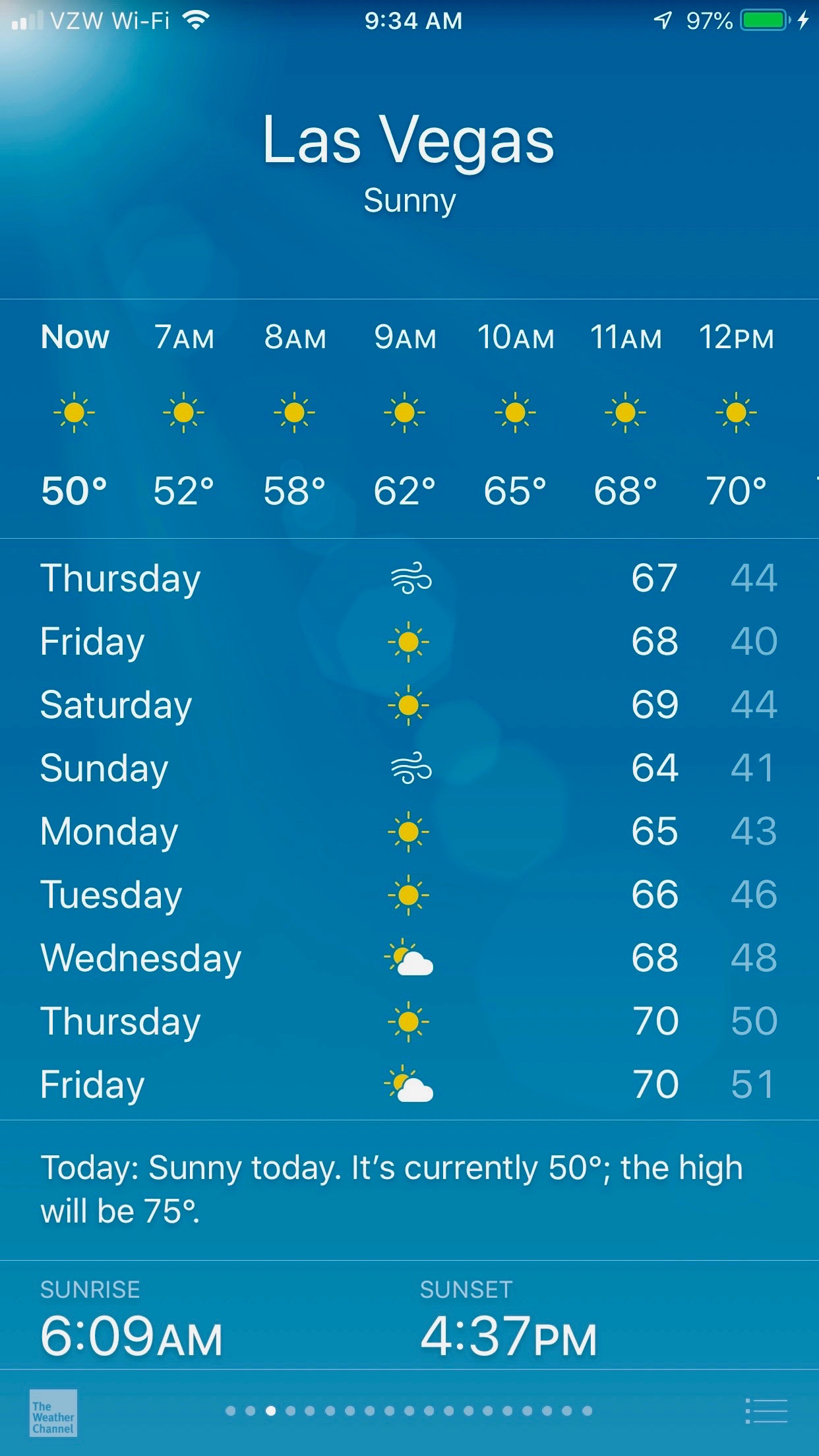 The start is always super crowded and, when you’re running with 40,000 (yes!) people, things get jammed up. Now, I’ve run this race three times and the corral assignments are by previous finish time but there’s no one checking if you actually had that finish time or if you made it up. How do I know? Because I was in corral 3 in the first wave and by the time I took 100 steps people were walking! This had never happened to me before but the first two miles were kind of a shit show. I was trying not to weave around too much and lose what precious energy I had, but it was hard!

I fell into a good rhythm and looked for my people at mile 5 by Caesar’s but sadly no one was there. Also sadly, my husband somehow thought my finish time would be around two hours (maybe he was thinking I was doing a half ironman?) so he also missed me at the finish. Whomp Whomp.

It was a weird race in that I went though waves of feeling great and horrible but luckily the horrible waves passed fairly quickly. I decided I wasn’t going to look at my watch at all and just run by feel. In years past there has been a timing clock at mile 10 but this year there was nothing so I had absolutely no clue how fast I was running or what my overall time was. 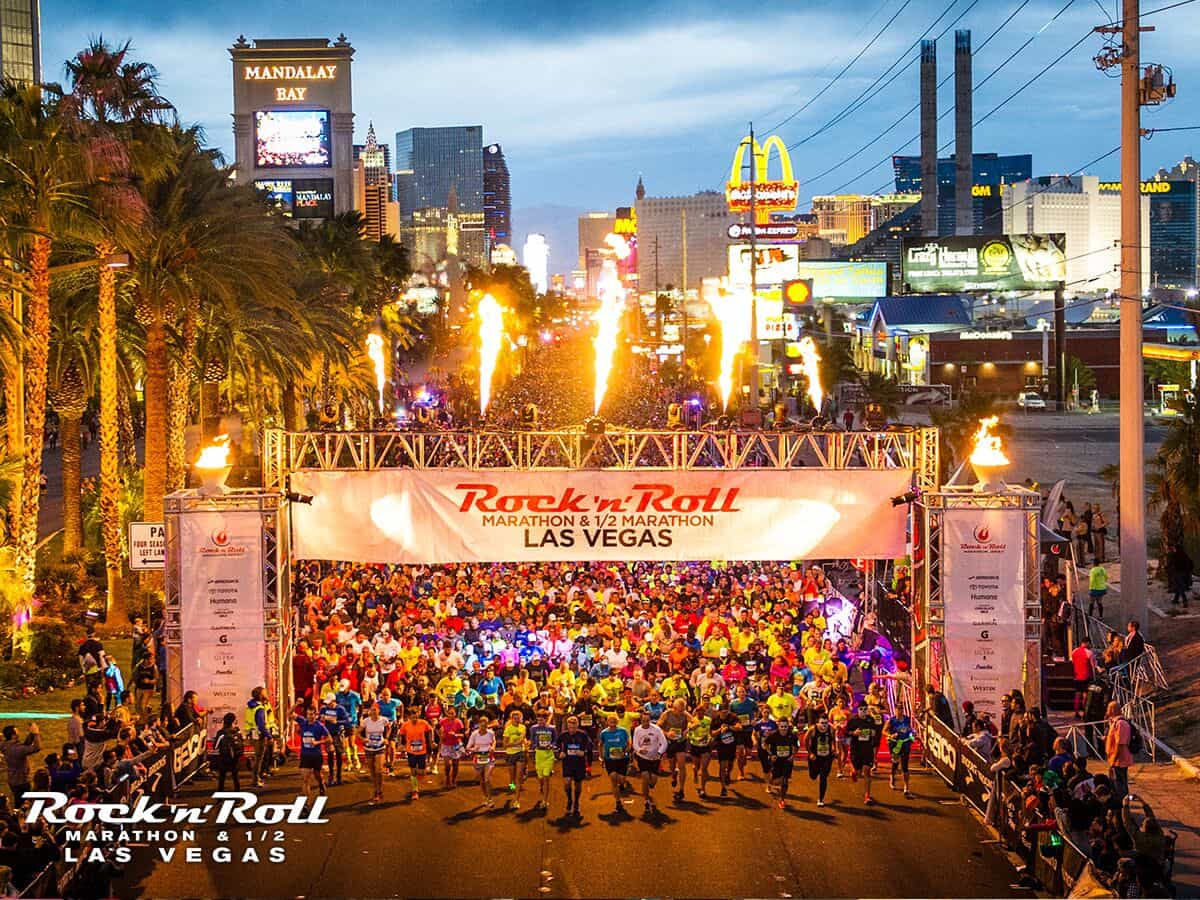 I’m somewhere in there!

I honestly could not even find the timing clock at the finish line! It was bizarre. Later on my friend told me it was on the ground on the left hand side. WTF? I have to say, I was genuinely surprised and disappointed to see my watch read 1:42:54 but it was quickly followed by “I did it!” time for a Lush bath bomb and dinner with Giada! 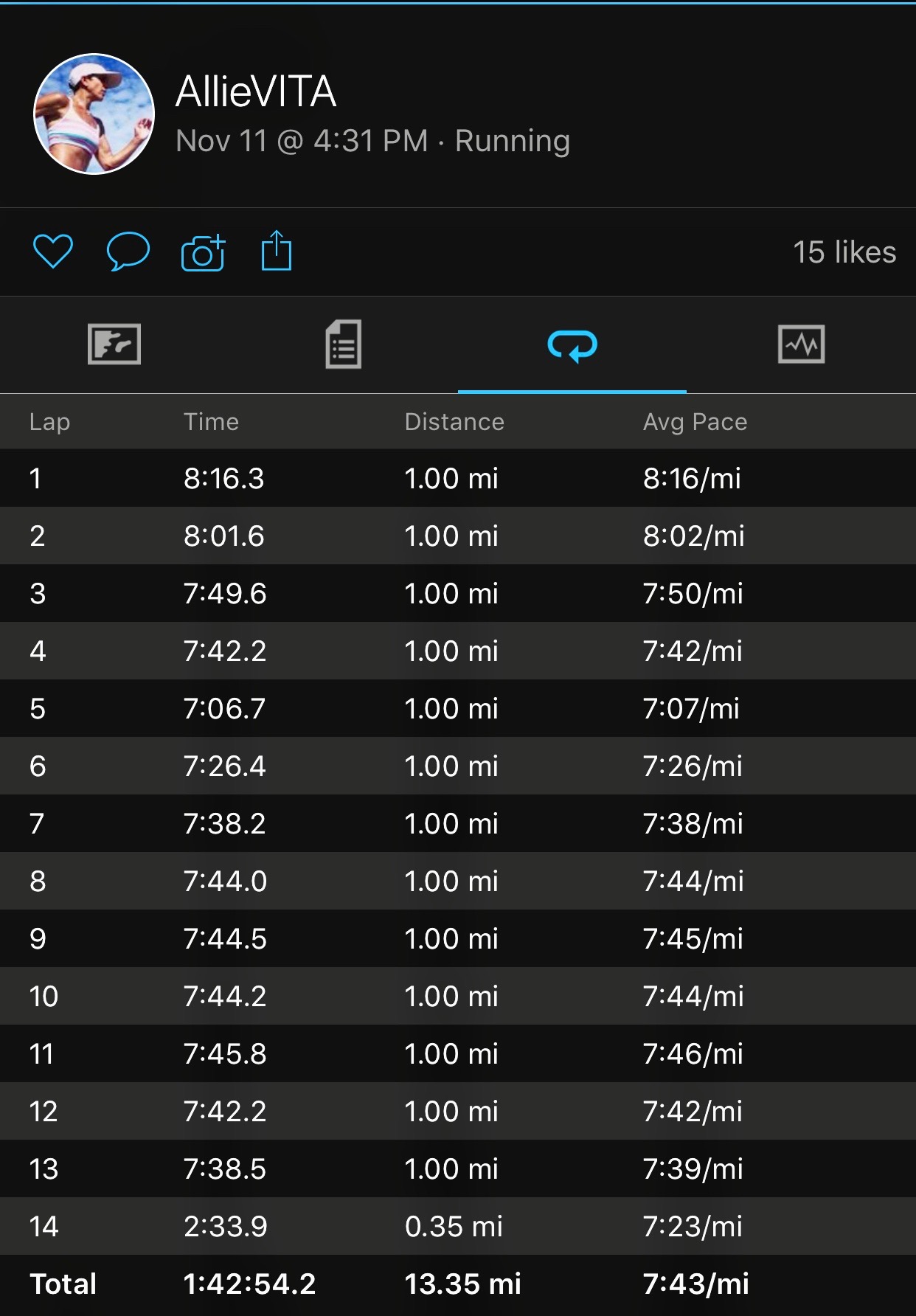 The real killer is how much walking you do when in Vegas. It’s completely unavoidable and, usually welcome, except when you have to run 13.1 miles on the next to last day you are there. My averages:

And for half marathon Sunday… 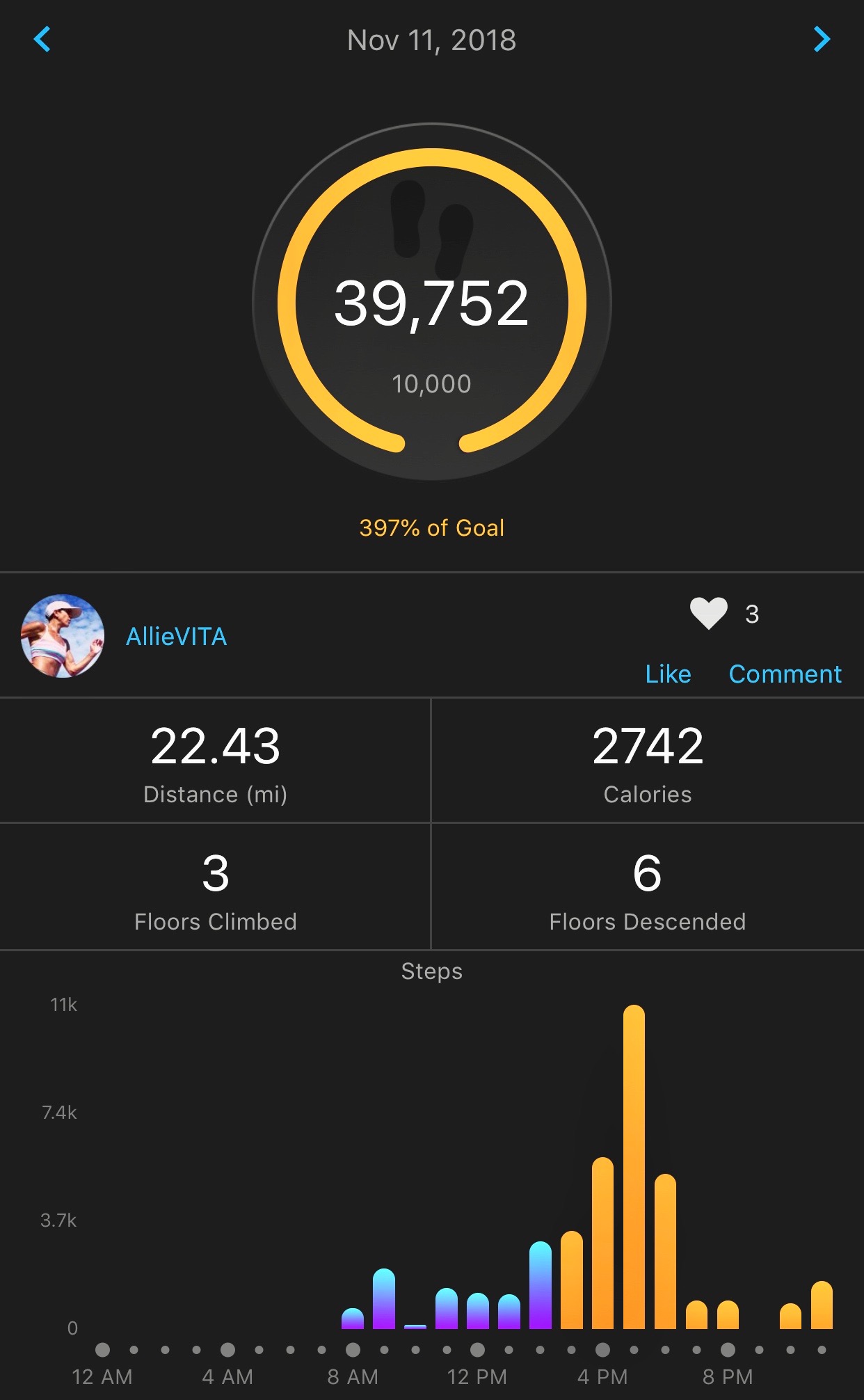 I should have run four more miles and called it a marathon!

There is so much to love about Las Vegas and this race! The crowd is truly amazing and I saw some great signs:

I seriously laughed out loud at all of these.

I obviously also loved all the time I spent with friends and family before, during and after the race… 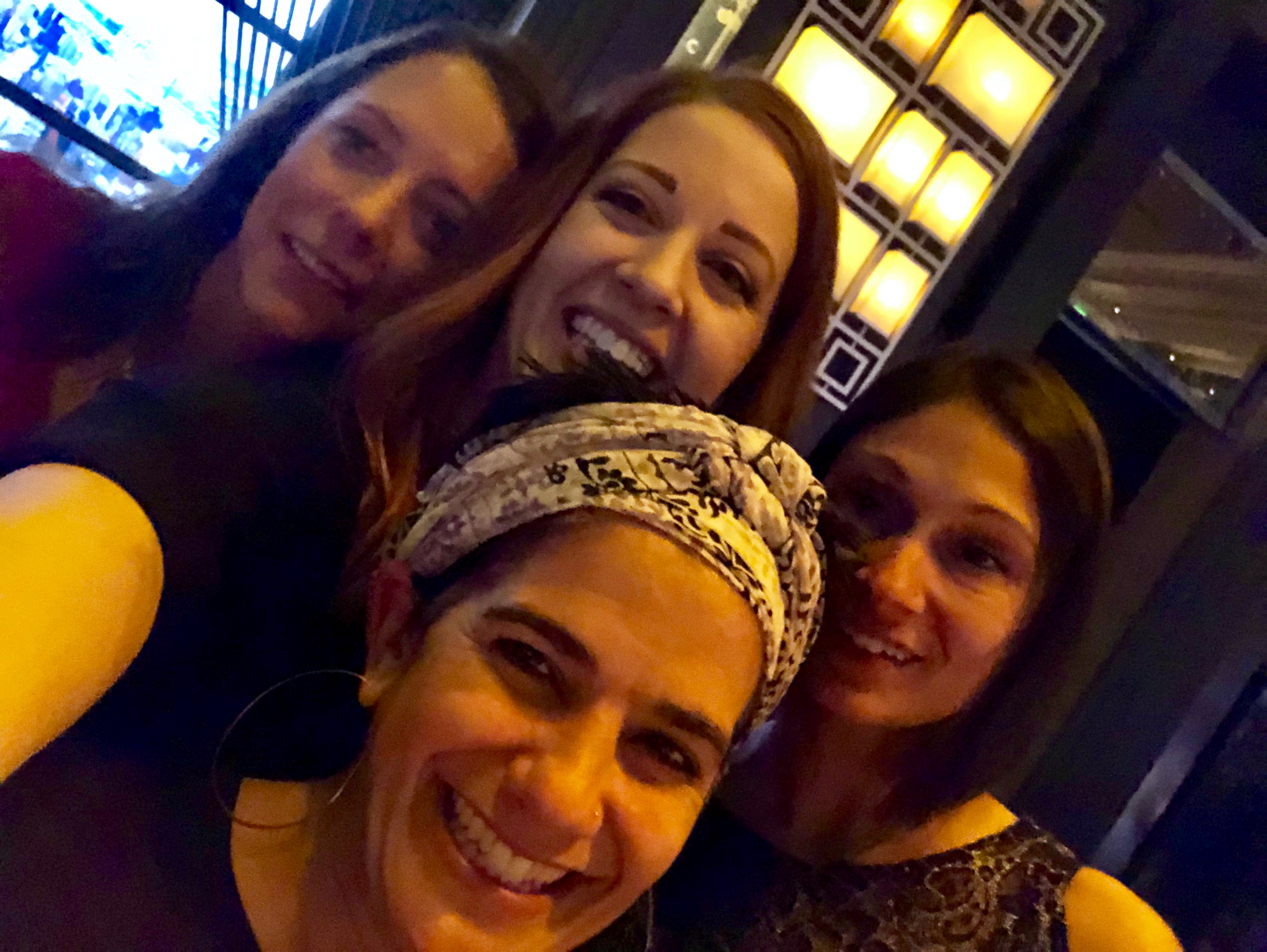 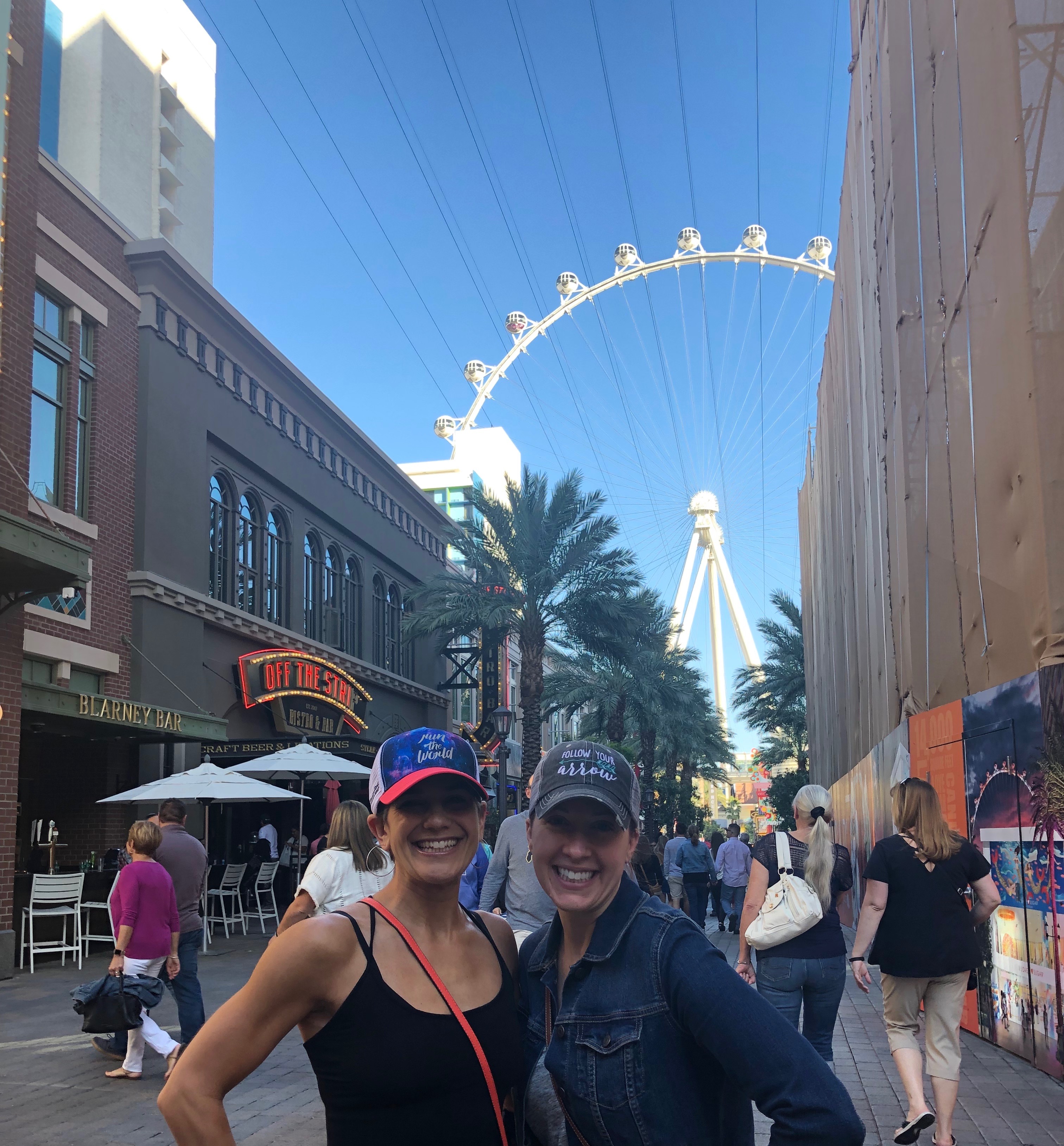 Me and my SIL/Spiritual Gangster/non-running sister Katie at the Linq! 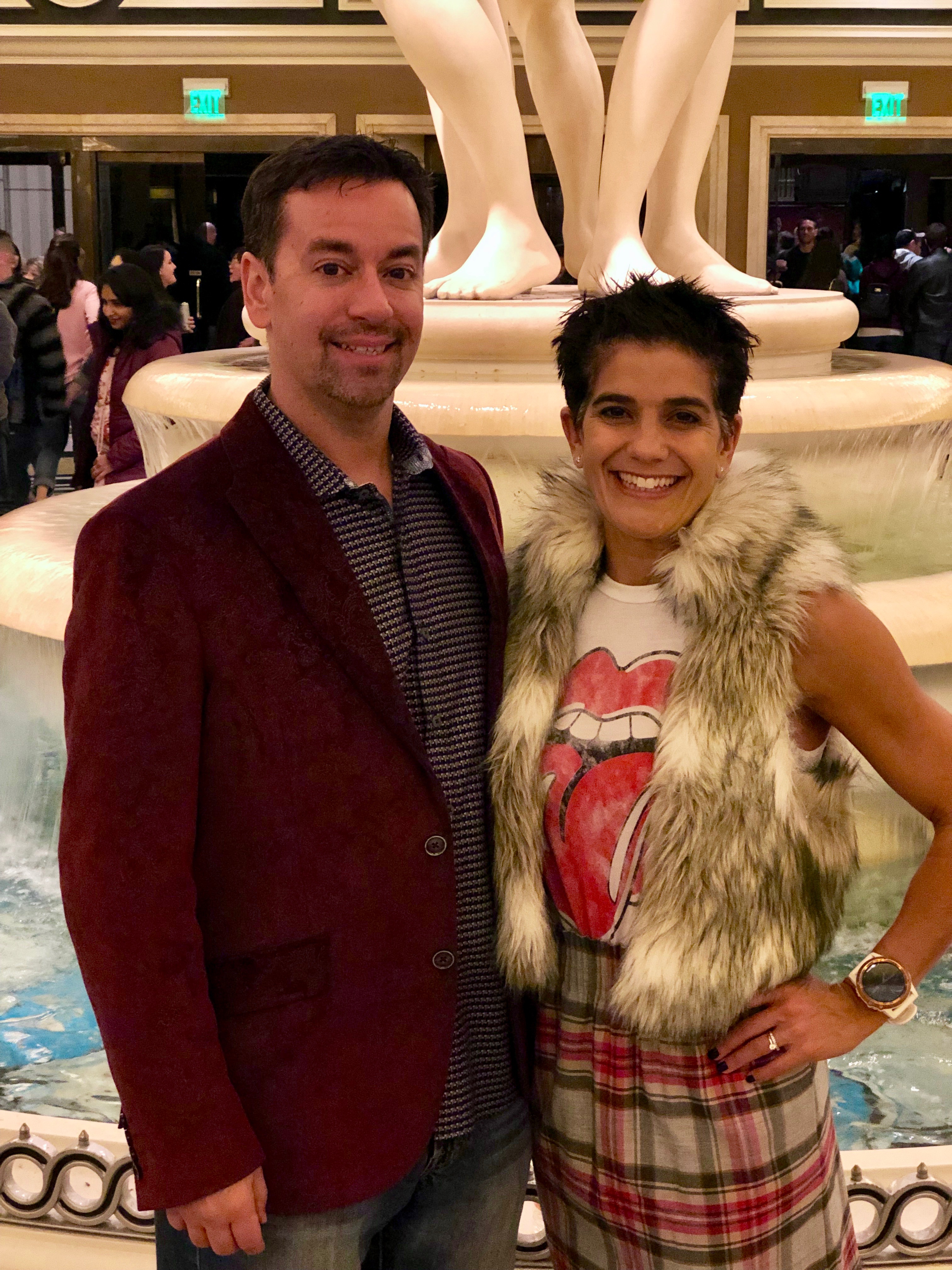 My husband and I about an hour after the finish – ready to EAT!

The ladies also spent some time at the spa, natch, and my massage therapist was a little whisp of a thing with magical hands! Afterward she said “you are so tiny but have lots of tension in your back and are tight everywhere!” Yep, that about sums it up.

THINGS I DIDN’T LOVE AS MUCH

In years past this has been a very well organized race but there were a few glitches this year.

The app I was told to download gave some misinformation about starting times (which was later corrected but not for about 12 hours!) including that “gusty winds” would be a factor for the race and they were not. Had I paid attention to the race info and not my SIL’s weather app, I would have dressed differently and been way more anxious about the weather. Not cool.

I mentioned the lack of any timing on the course and a lot of runners who definitely should not have been in the first corrals, but also the start line and waiting area this year was the third different one in as many years! I realize the mass shooting was a factor last year, but it’s super annoying to have to try and find the start line every year. I’m sure there’s a good reason but I’m still going to bitch about it.

Lastly, and maybe most importantly for some runners, is the absolutely horrible race photos! We could not be running in a more photo ready fantastical environment and these are the pictures I can choose from:

Even with the “MarathonFoto” water marks all over them you can tell they are not what one would expect from running down one of the most iconic and lit up landmarks on the planet! I may as well have been running down almost any dark street in the country. #shamebell

Speaking of shame, I rang the bell for this dude at the starting village. I wish I had a picture but he was literally dressed head to toe in NYC Marathon 2018 gear, right down to custom NYC marathon sneakers! My husband said I should have asked him if he ever ran the NYC Marathon.  HA!

The bling, however, did not disappoint. 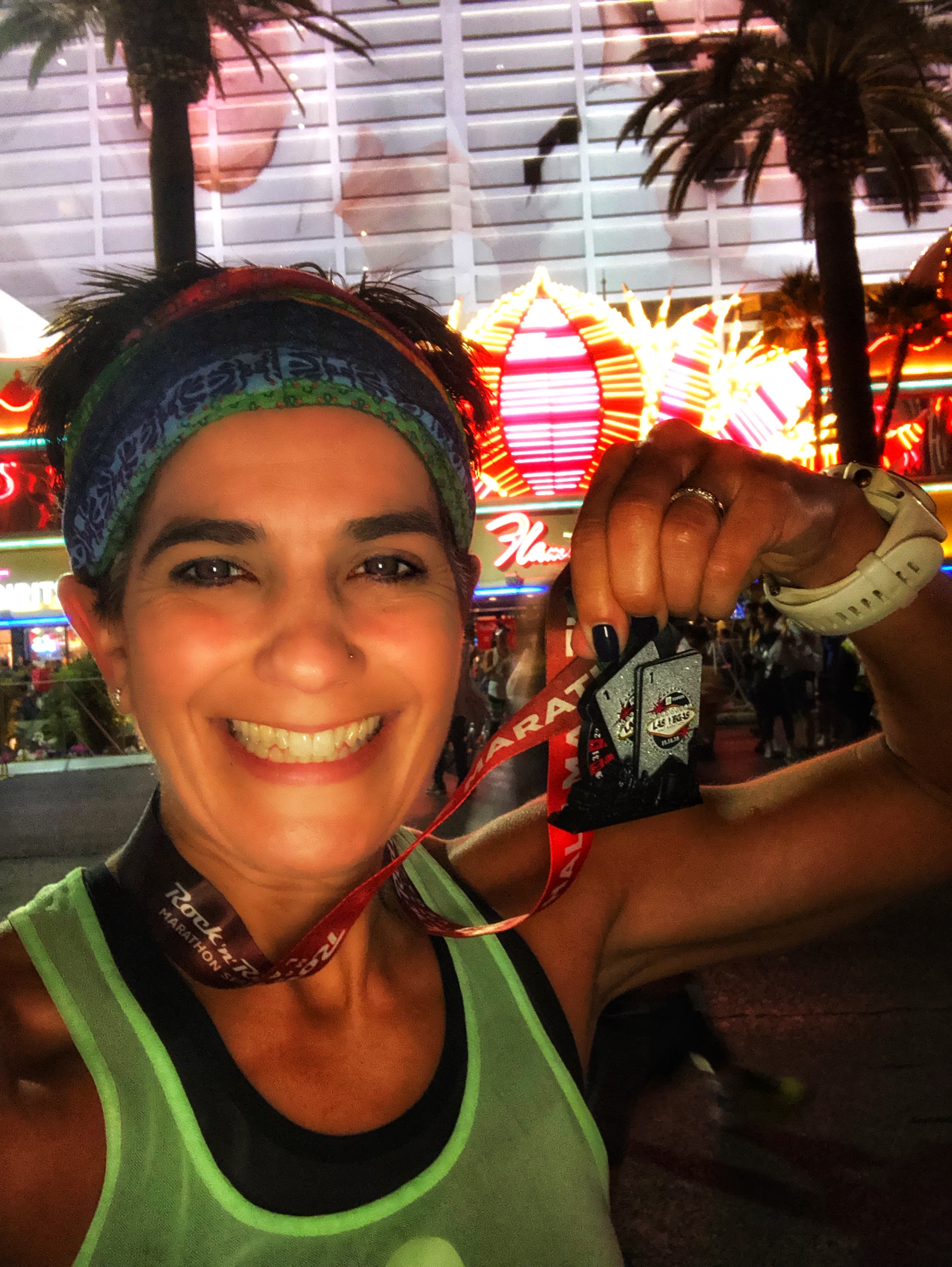 RANDOM EXCHANGE OF THE TRIP

There are so many interesting looking and just plain interesting people in Las Vegas. This random exchange happened in the elevator at Caesar’s Palace Hotel, where I was trapped, with one very “interesting” couple. As soon as I got onto the elevator I could sense there was tension between them since they were standing on opposite sides of the metal box and talking with an edge – not outright fighting but not getting along either. I had no choice but to stand in the middle, leaning against the wall, with a hat on and my head down when this happened:

Him: Babe, I’ve been here several times and I know where it is!

Her: I know you think it’s down but I think we should be going up!

Him now talking to me: Do you know where the pool is here?

We are at Caesar’s. Caesar’s!

I looked at her with pity and then amusement and said: It’s Rome. It’s Italian.

Him: See! And the pool is on the ground floor and not the roof!

My coach suggested I take the next week off and, after I recovered from having a panic attack, I agreed. Now, she and I may have different interpretations of what that means but let’s just say I will need to run, bike and swim while my kids are home for the Thanksgiving break or we won’t all survive.

My next race is the Duathlon National Championship in Greenville, SC in April and I cannot wait.

Lastly, we already had our first snowstorm of the season and I love it! Skiing, snowboarding and mountain time have arrived!

Night sledding in your pajamas is totally normal, right? 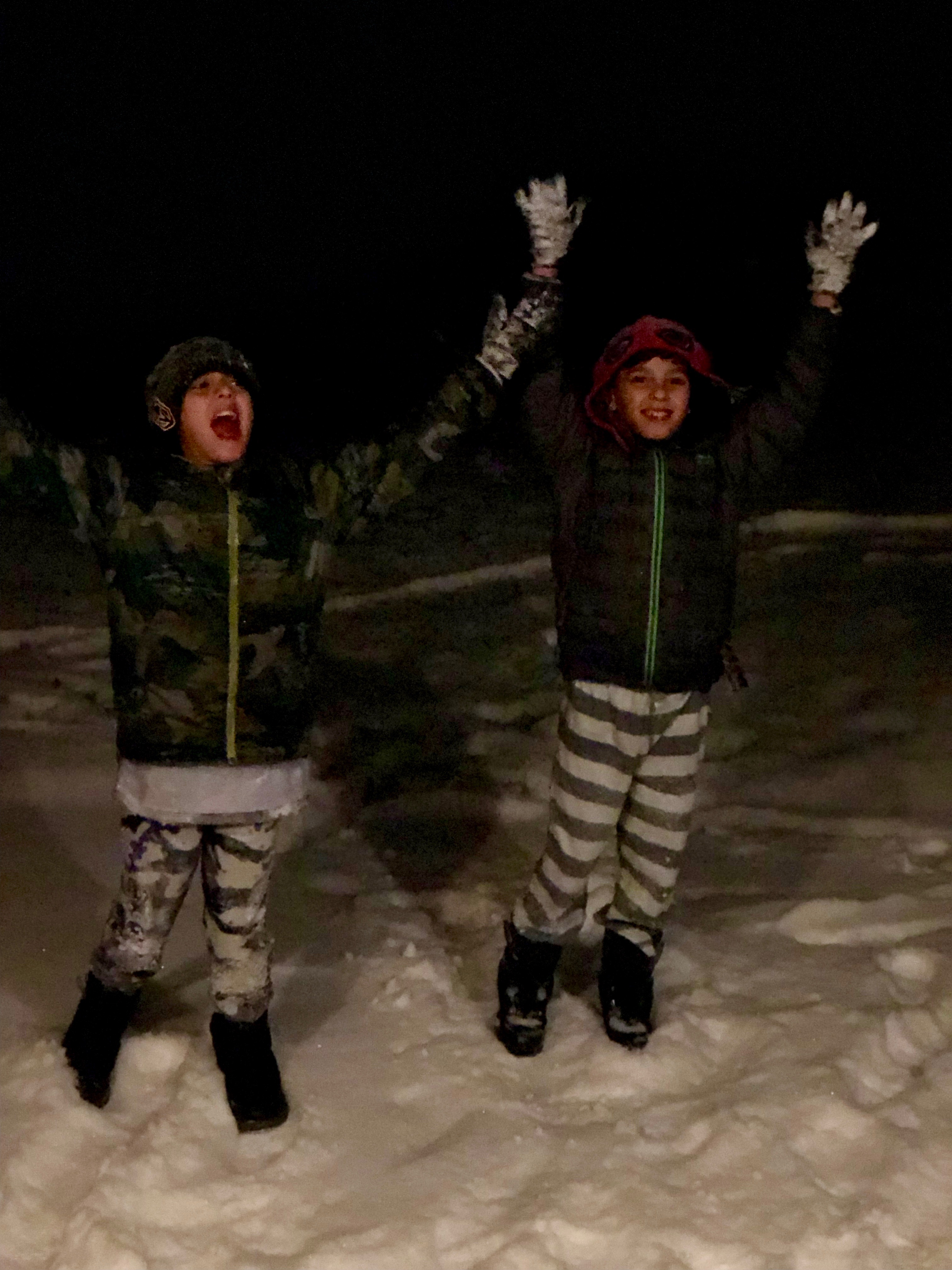 Obviously they hated it. #parenting

Happy Thanksgiving everyone! See you back here soon…

[Tweet “VITA is back from 13.1 miles in #sincity and has a lot to confess! #train4life #therundown”]

What are your Thanksgiving plans?