The Rundown – Don’t Believe Everything You Think 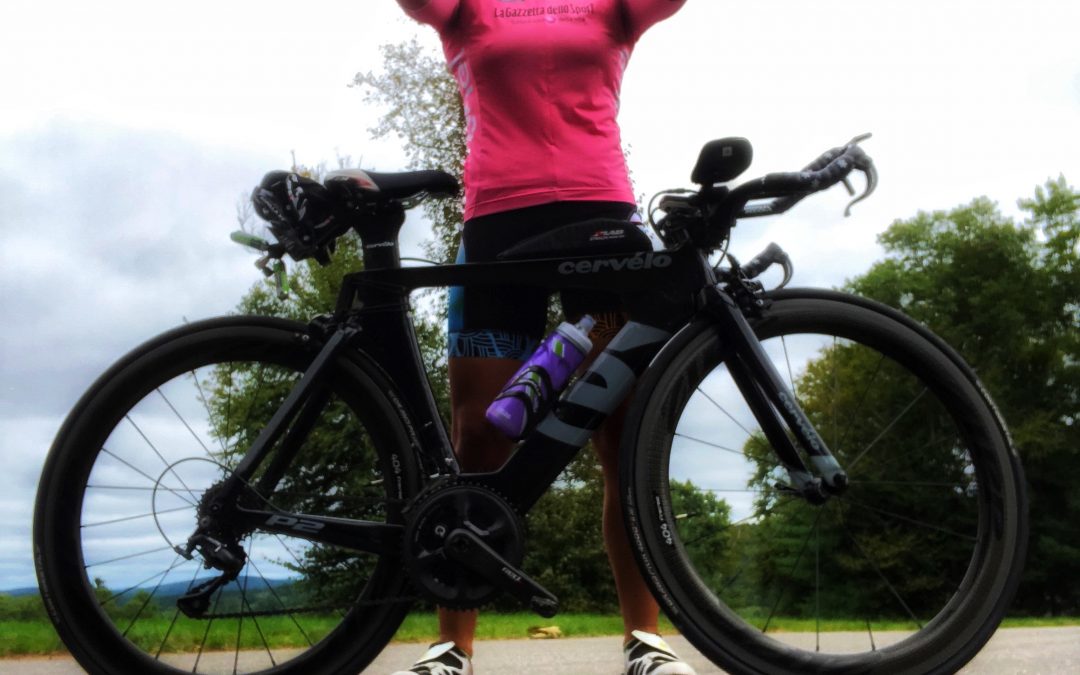 Tim Ferris ended his podcast interview with Katie Couric by asking “if you could put one thing on a billboard for everyone to read, what would it be?” I can’t remember Couric’s response but, the reporter in her couldn’t help but turn the question around to Ferris and he responded with “Don’t believe everything you think.” Damn. 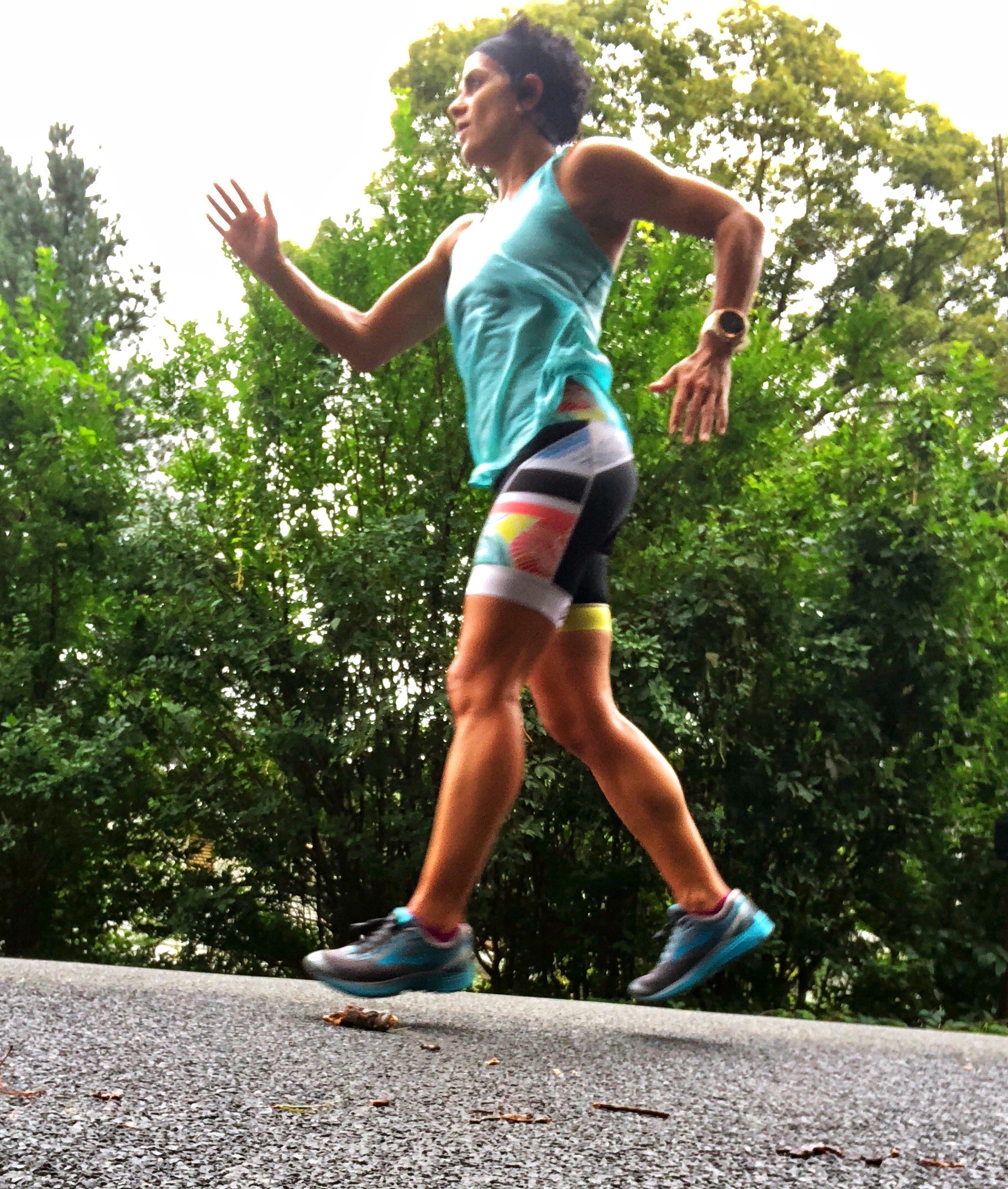 Such concentration. And I’m wearing bike shorts because I was doing a bike/run. Just want to clarify lest you think I lost my mind…or just didn’t have clean running shorts. The horror.

I’m still racking up speed work and mileage over here on my quest to run down 13.1 again in November. During most of my miles, and most definitely during speed work, I cannot believe everything I think. I know how important self talk is and I’m pretty good about it during my workout, it’s the aftermath I need to be careful with.

Now, thanks to Ferris, I have a simple solution. Whenever my brain starts to wander into negativity where my training is concerned, I simply choose not to believe it. It’s working.

Also, I have it in my face all day long. 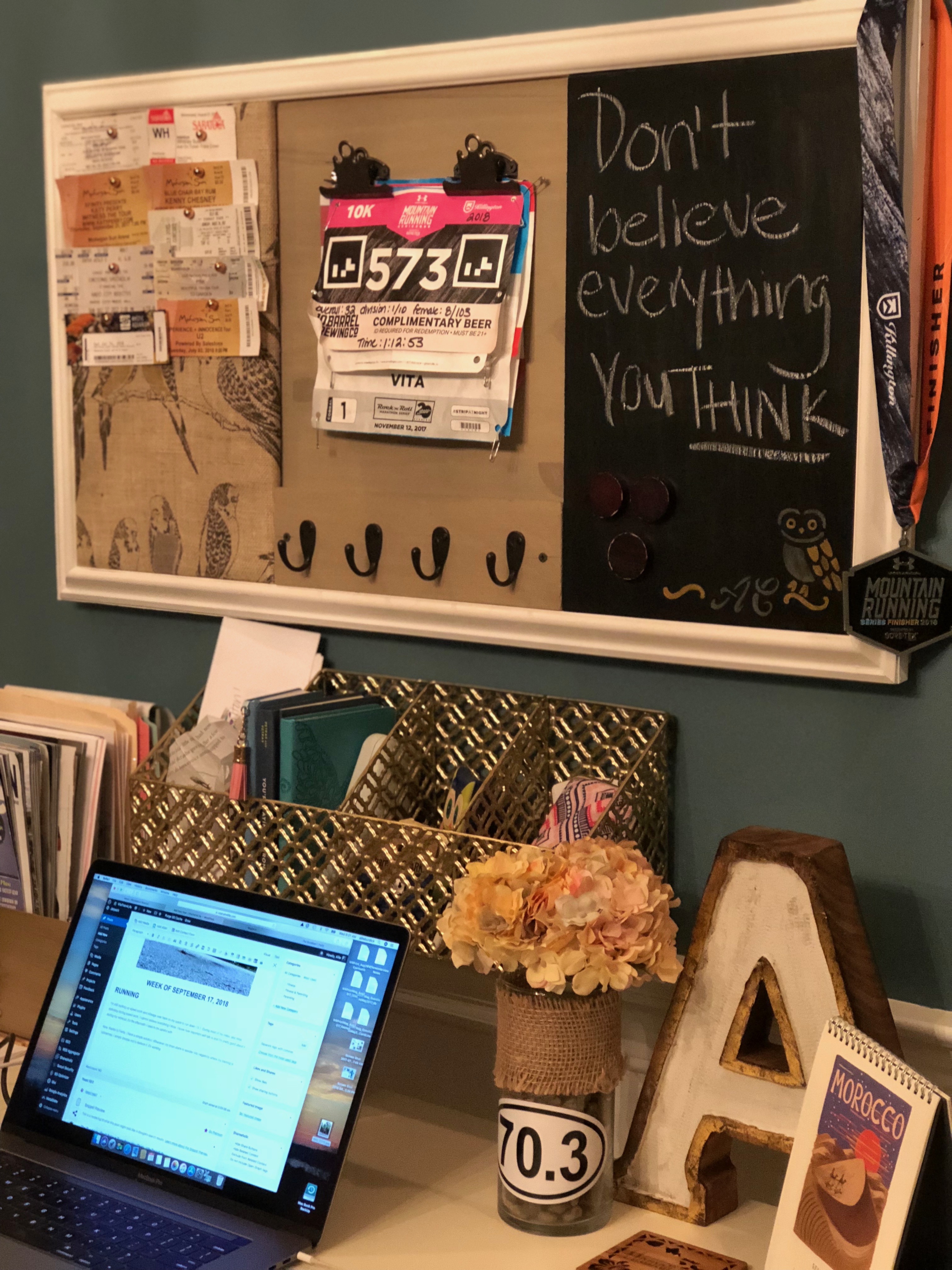 I had two rides this week, one inside on the trainer and one glorious ride outside. I say “glorious” because after weeks of humidity and rain, the dew point diminished along with the temperature and it felt like heaven. It also felt kinda cold. Yep, you read that right. I had to actually wear arm warmers on the ride. Woot woot! 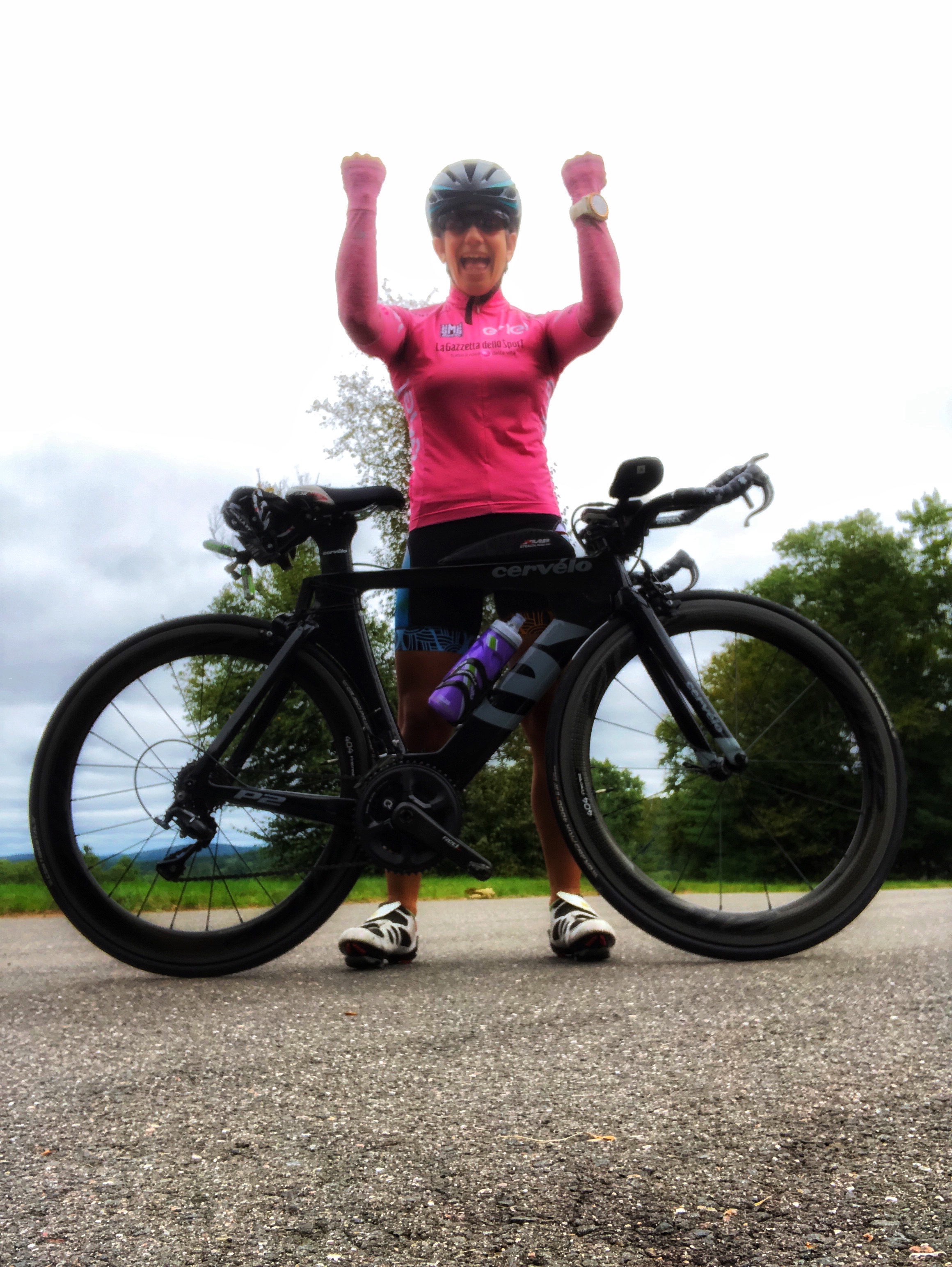 I knew you were coming for us fall! Yay!

Mostly I need to believe I won’t die on the road while riding, which occupies my thoughts for the majority of of my time in the saddle. If I think too much about how distracted drivers are or how a stiff wind could send me into a ditch, I would never leave the house.

The one swim I managed during the week was yet another recovery swim. I have to admit, I’m missing my time in the pool…but not that much. Mostly I have been busy planning out places to swim while on vacation or racing this spring. Yes, I’m starting now, because winter is coming.

The kids already have their skis for the winter season and I bought a pair for myself! If you hate winter, you can probably skip this part.

I know we technically haven’t had fall yet (and I do love fall) but I’m getting really excited for ski season. I haven’t been on a pair of skis since college, which is when I switched over to snowboarding, but I’m going to try and take it up again just so I have options.

I keep telling myself I’m not having a mid-life crisis but I’m suddenly taking piano lessons and getting back on skis. Whatever. As long as I don’t start collecting cats. 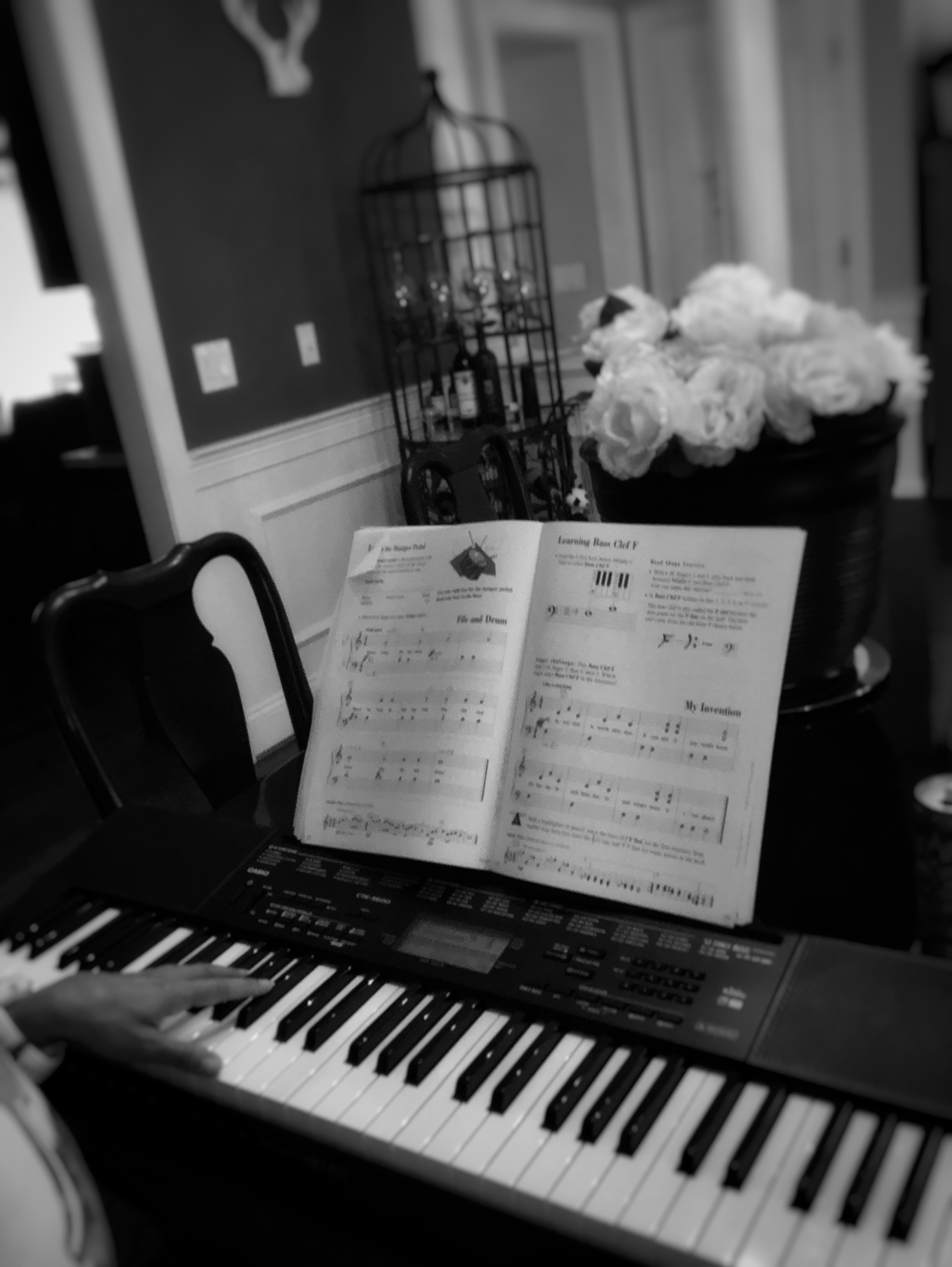 I’m still loving piano and learning a lot. It’s super challenging but my teacher takes the edge off with his hilarity, overly loud voice, and incredible life story.

Peter my piano teacher had brain cancer. Brain.Cancer. And, after years of surgery and chemo he was finally declared in remission. One month later, he suffered a stroke. He’s 26. He currently only has partial use of the left side of his body. I know. He’s amazing. He is the master of not believing everything he is thinking and it comes through in his teaching.

Peter has zero pity or tolerance when I tell him the notes don’t make sense to me and reading music makes my head want to explode. When I tantrum he just stares at me like “wahhhhhh” and says something like, “look at my face. I have brain damage! I have zero pity for you. Keep going.”

He’s the perfect teacher for me. Obviously.

I saw this on Insta so I’m just going to leave this here and let you infer what you will. 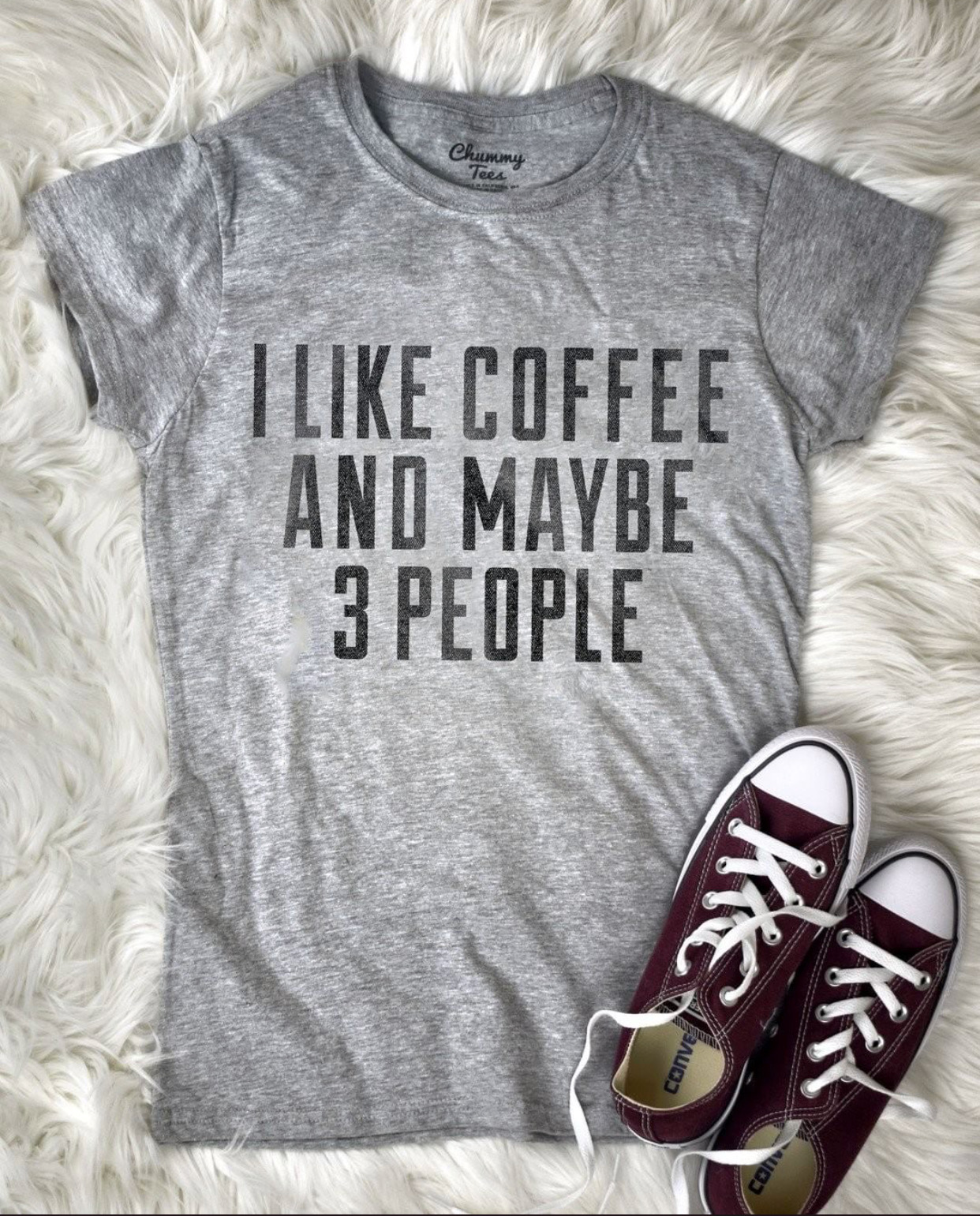 And, as my friend replied when I texted the pic to her — “3 is pushing it.”

It’s interesting what will really light a fire under your ass when the endorphins are in full effect. I created a pretty weird playlist during the two minutes I had before starting my indoor track session last Tuesday. It was certainly eclectic but see if you can guess which two songs gave me the biggest rush during the toughest sections: 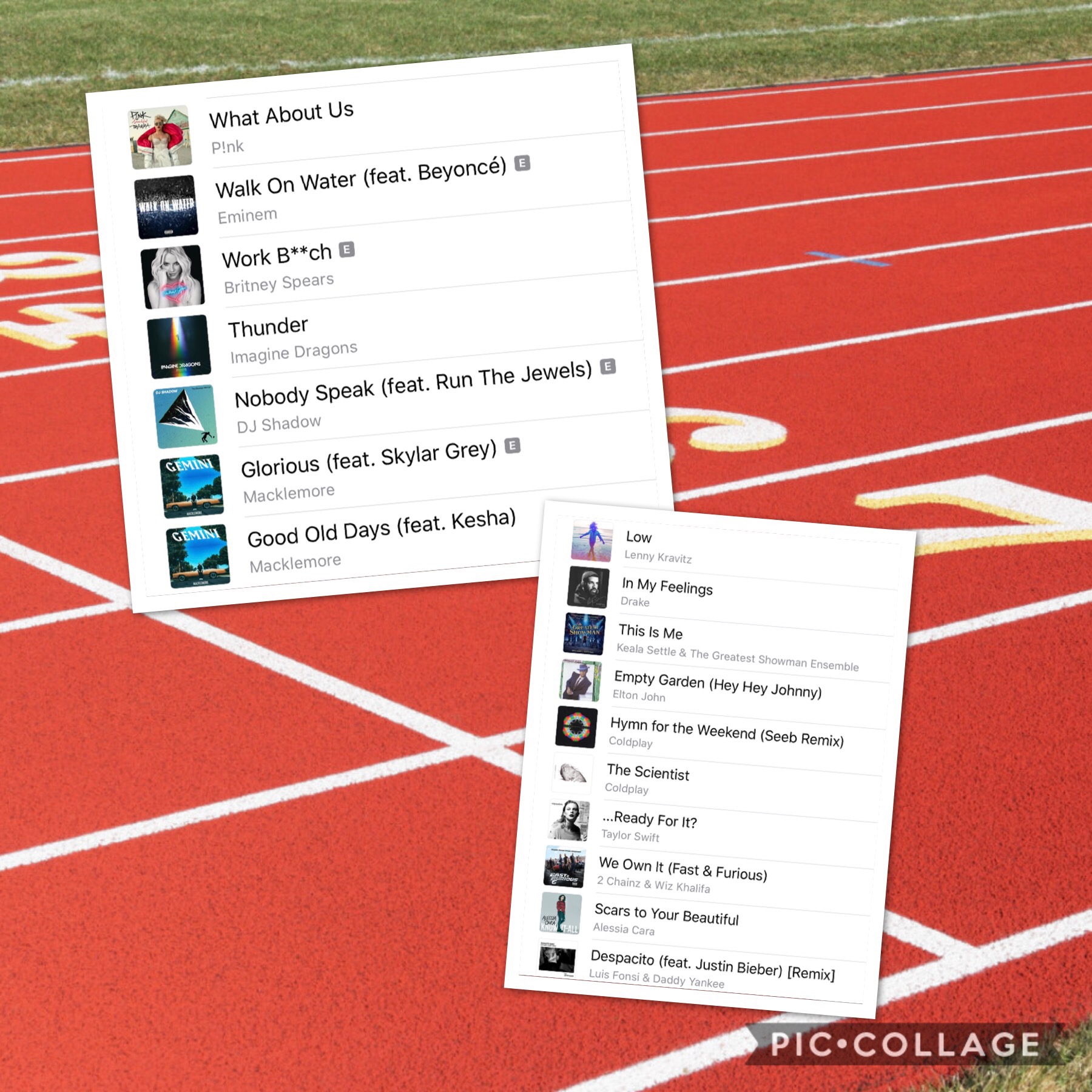 There seems to be some obvious choices but remember the title of this rundown. Unless you picked “This Is Me” from The Greatest Showman soundtrack and “The Scientist” by Coldplay, you are wrong.

Seriously consider adding both to your running playlist. I’m just as shocked as you are by the circus one. As for Coldplay, the line about “running in circles, chasing tails” pretty much sums up my hour on the oval. That song has always been one I connect with and it reminds me of how unprepared I was for parenting, with the line “nobody said it was easy, no one ever said it would be this hard, I’m going back to the start.” Same goes for running after having twins.

If I ever complete the list of books I want to read, it will be a miracle. It just keeps growing! I just started reading Behind Her Eyes by Sarah Pinborough because a ton of people recommended it. So far, it’s very intriguing and I definitely want to read more but you know, I’m very busy watching Shameless season 9, The Sinner season 2 and Ozark season 2. Very busy.

Luckily, I had time to read this gem so I can share it with you fine people:

I Stopped Trying To Control Every Part of My Run | runnersworld.com | Jonathan Beverly

I see hawks on nearly every run and have always enjoyed their beauty and grace. But this day, I noticed that despite the whistling blast, this red-tailed raptor wasn’t struggling to make progress, flapping and fighting to stay aloft. Instead, he soared, swooped, dove. He glided gracefully overhead. He embraced the wind, used it to his advantage, even played in it.

The point of the article is to stop fighting against what you can’t control. It’s why I’ve accepted to “train where I am” now and not pine after paces I was running five years ago. It’s about trying to stop bitching about everything that’s wrong with a run and embracing the “wrong” and going with it. It’s about not believing everything you think. < — see what I did there?

I had a sick boy home with me last Wednesday so I did my miles on the treadmill. After running for about an hour, I came upstairs and found this in the bathroom… 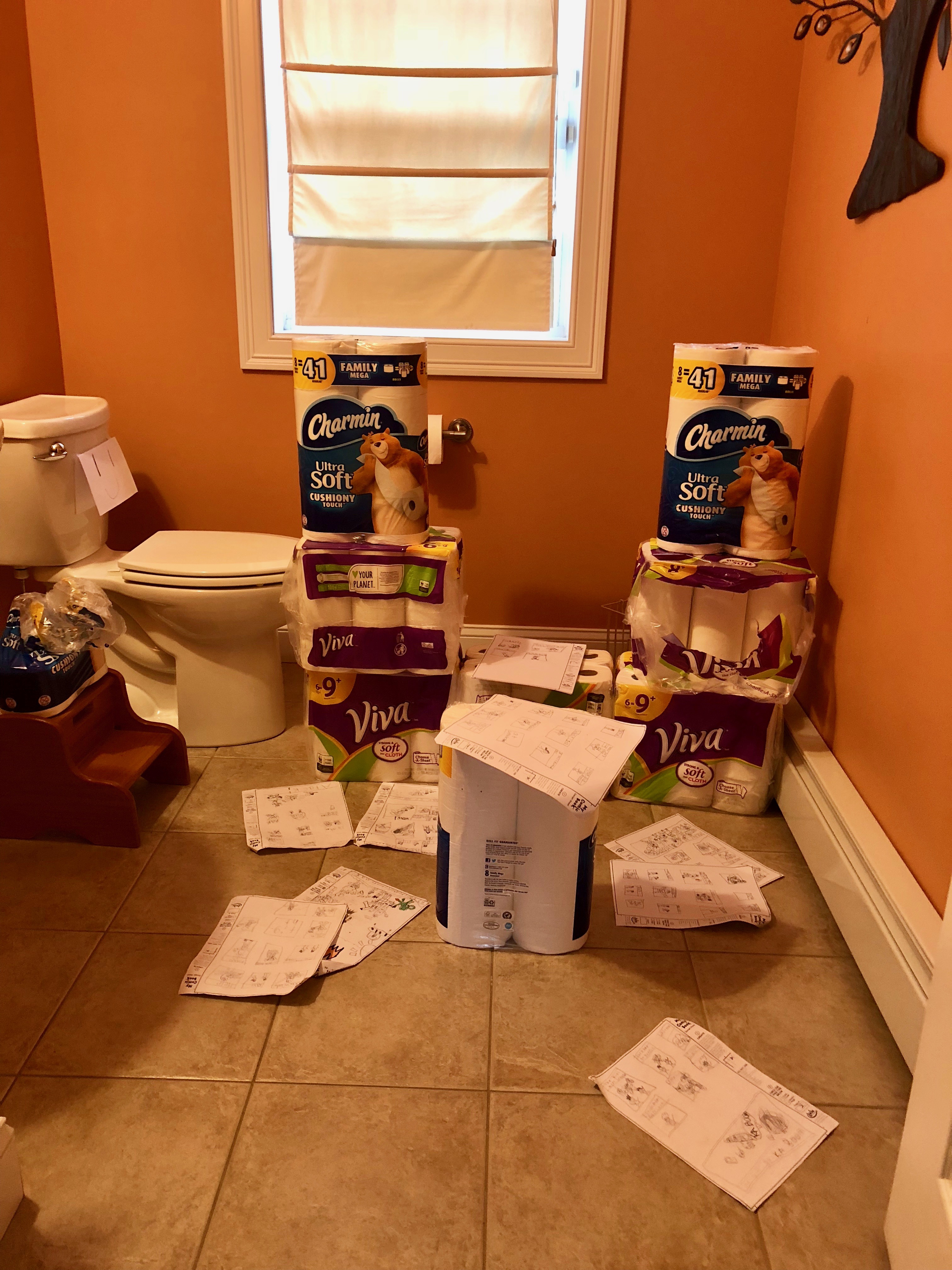 I’m just happy I didn’t run longer or he may have toilet papered the kitchen too.

[Tweet “The Rundown is not beliving everthing it thinks, a #piano teacher story you have to read and a #picture you have to see! #train4life”]

What thought(s) should you chose not to believe?

What is the weirdest inspirational song you listen to?