The Rundown: Don’t Call it A Comeback 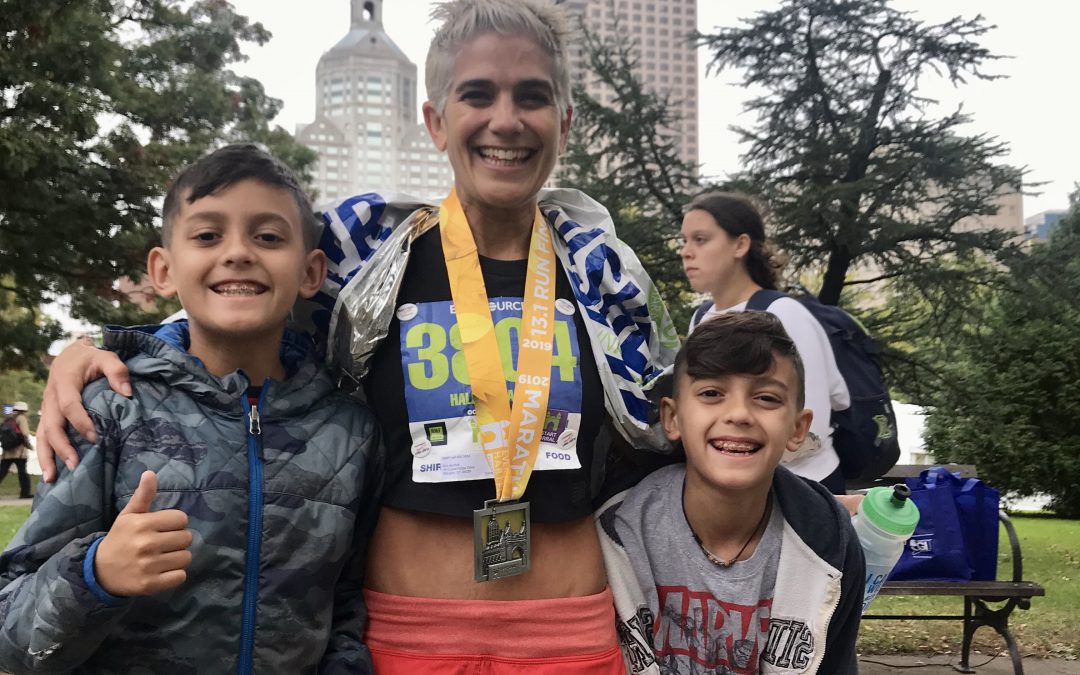 It’s been a beat but I’m back…for now. Between grad school taking over everything, training and racing a half marathon last weekend and life in general, I haven’t made time to write here until now. Let’s see how much I can cram into this post before I disappear into oblivion again…

If you recall, I have been training for what will most likely be my last goal race for a while. The Hartford Half Marathon was last weekend and my true goal was to feel good and strong to the finish and win the mental battle. Mission accomplished.

I worked my ass off on the track, roads and in the weight room since May (yes, May!) to prepare for this race and get my body from triathlon shape to half marathon shape. It wasn’t always easy but I was determined to race well over 13.1 miles.

Did I mention my coach announced a life change and her leaving coaching for the foreseeable future in late August? Yep, that happened too.

So, back to race day — I ended up going alone (another story I won’t get into), the weather was perfect and I was determined to run strong and rule my mental game. Everything went amazingly well until about mile 11 when the 1:40 pace group passed me. Instead of getting defeated, I dug in deep, and made it to the finish in 1:39:36 which is a 7:36 average pace and placed 8th out of 257 in my age group. I did it.

Next up is a 10 mile race in Stowe, Vermont with a good friend of mine who had to miss the Hartford Half due to an injury. I can’t say I’m looking forward to the hills but it will be a fun weekend no matter what!

I managed to do all of the above, at least one day a week for the past several months. I will continue to strength train with Antwan, as he is essential to my staying injury-free, and I know I will be binge watching something on the bike trainer though the long winter. < – -I started with El Camino the Breaking Bad movie! #yeahbitch

Antwan posted my post-race pic and this one (below) from one of our intense sessions on his Insta account. I highly recommend anyone in the area to train with him! He is currently accepting new clients and you do not have to be a member of Star Hill to work with him! #lifechanging

I’m pretty sure I wrote about how the universe spoke to me one day on an airplane? I was on my way to triathlon training camp back in February and having my usual freak out sessions when the woman next to me said “I can tell you there are angels all around us and we will make it to Florida safely.” Something about the way she said it, made me believe her. And no, I normally have zero faith about arriving at any destination alive so…

Turns out she is a reiki master, living in a nearby town in Connecticut so we exchanged information and I have been seeing her for reiki sessions and psychic readings once a month ever since. The things she has told me are simply unbelievable and each time I leave I feel better about my entire life. How many experiences can you say that about?

Of course I have introduced her to all of my friends, because when it comes to universal amazement, I like to share.

This is what happened last time I saw her…

After she conducts the reiki (which is so fantastic I usually fall asleep) she says things like “I feel compelled to tell you…” followed by some mind blowing shit she could not possibly know. This time was different. She “felt compelled” to give me a book. I have so much freakin’ reading for school (which she is aware of!) that I sighed and rolled my eyes. She told me to get over myself and handed me “The Four Agreements” by Don Miguel Ruiz.

I had never heard of this book before in my entire life but if the universe wanted me to read it I would at least skim though it.

Later that day, this showed up in my email from Amazon:

I mean, I realize Amazon also knows everything but this was super freaky! I had not Googled it, talked about it (because I know Alexa listens to everything!) didn’t even think about it, plus it’s a book from like 1997, not some trendy self-help shit like Girl Go Wash Your Face. This is the real deal and I love it.

First things first. It’s Indigenous Peoples’ Day. Columbus was a genocidal monster who discovered nothing and did irreparable damage to an entire race of people through massacres, diseases and forced assimilation. Please, for the love of everything that is still good in this country, stop calling it “Columbus Day!”

What did we do on October 14th this year? I read this to my kids:

It’s an excellent book and teaches kids to question what they are learning in school and to investigate for themselves anything that seems questionable. It’s not anti-school in any way, it’s actually pro independent thinking and learning and challenges young (and not-so-young) readers to find answers for themselves.

So yes I have a shit ton of reading for school (and for the reeducation of my children) but I’ve been very busy listening to audiobooks during my commute. Some of the best are:

Talking to Strangers by Malcolm Gladwell: as far as I’m concerned, this should be recommended reading for everyone in America. He talks about how we can’t communicate to save our lives, literally, and uses examples like Sandra Bland, Jerry Sandusky, Amanda Knox, Bernie Madoff and so many others. As with all Gladwell reading, it’s fascinating!

She Said by Megan Twohey + Jodi Kantor: You knows these ladies as the NYTimes journalists who broke the Harvey Weinstein scandal but the behind the scenes look as well as an entire chapter and afterward about Christine Blasey-Ford is more than enough reason to read or listen…just keep a puke bucket handy. Weinstein should rot in jail for eternity…or longer…and of course receive daily counseling.

The Testaments by Margaret Atwood: OMG if you have watched the Netflix series of The Handmaid’s Tale then this is required reading…or listening. It’s incredibly good — so much better than I even thought it could be — and the actress who plays Aunt Lydia in the series reads the role in the audiobook. Her story is off the charts!

What I’m listening to now: Dear Girls by Ali Wong: it’s hysterical and nice a change from all the seriousness above!

Fleabag kept popping up on my Prime Video as a “must watch” and like 90% match so I finally gave in and started watching with my husband. I wanted to punch myself in the face for waiting for so long! If you love raunchy comedy, feisty British women and laughing hysterically then this is the series for you.

For now, I’m patiently waiting for the new seasons of Shameless, Ray Donovan and Queer Eye in Japan! YEASSSSSS QUEEN!

Drink up people because I’m not sure when I will post again. I know you will all be waiting by your laptops in anticipation…

What have you been coming back from?

Do you believe in the psychic powers of the universe?

Read or watch anything good lately?