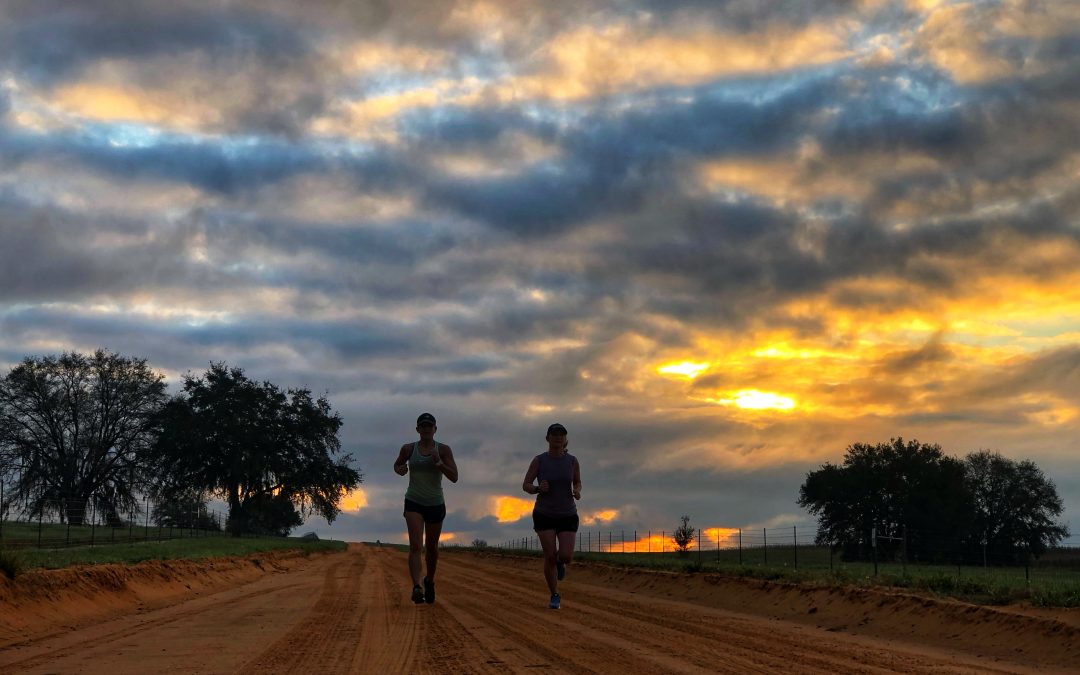 I want to start by thanking everyone for their comments, emails, phone calls and text messages about my post on my fear of flying and panic attacks. I cannot tell you how much it meant for me to be so vulnerable and have it be so graciously received. Each time someone told me I was not alone, I felt better about putting myself out there, and also that I may have helped a few others who struggle with anxiety.

You will be happy to know that I had two good flights in my travels to Florida! I also had the luck (or possibly devine intervention?) of sitting next to a Reiki Master on my flight down and she was tremendously helpful! I could not thank her enough and I will be reaching out to do more Reiki and possibly learn the technique myself. For the locals, Lisa can be found at Serenity Grove Wellness Center in Coventry.

Now let’s get to the good, the bad and the ugly of my first triathlon training camp in Clermont, Florida.

My coach (Becky aka CRS aka Coach Rocket Science) decided to try something new this year with her athletes and planned a winter training camp in sunny Florida. It ended up being just me and fellow teammate Caitlin and a friend of Becky’s to help with logistics. She chose the National Training Center in Clermont, FL because of the state of the art facility. However, it was adjacent to a rehab center and hospital because, Florida, so we were surrounded by elite athletes and the elderly. It gets weirder.

We were not allowed to take pictures inside the facility but Caitlin managed to snap one of the pool before she was properly informed of the rule. This salt water, outdoor pool was the highlight of the trip for me.

Wake up time on Monday was around 6:00am and we were loaded into the van by 7:15am with run and swim stuff. We had no idea how grueling day one would be but, in retrospect, I’m kind of glad I didn’t know!

Everything at the NTC is regulated down to the minute. We were not allowed into or onto any facility until the exact moment of our allotted time and were promptly kicked out when time was up. It was like military school for triathletes.

In a word, my time trial sucked. We warmed up and then ran for 30 minutes as fast as we could. There was a wicked headwind on one side of the track and it was brutal. Not trying to make excuses but that was tough. Also, my head was just not on right. Coach was filming us and later that night she didn’t even want to show me the film because she said “That was not you running out there. You were so tight and tense and it just wasn’t you.” So, we had a lot to work on.

I can say that the 6 foot plus team of what looked like college age men who were warming up while we were sucking wind (literally) around it did not help. In my mind they were thinking “oh look at those cute little white girls trying to run fast!” I also think it was just the thought of a time trial in front of my coach while she was filming me. No pressure.

My average pace was 7:41 for the 30 minutes. I was not happy but there was a lot more to be done.

We headed to the pool for yet another time trial of 1,000 yards which is 40 laps, after a proper warm-up of course. We all know my swim leaves a lot to be desired so the film from the pool that day helped me tremendously! I did so much great work on my stroke and body placement. I can’t tell you how much it helps to have your coach standing over you, watching, answering questions and filming. Once I could actually see myself swimming, it was so much easier to make adjustements!

After lunch it was time to bust out the bikes and do some drills. It was while I was practicing the art of slow turns and ratcheting my pedals that I took a slow motion fall off my bike. I still have a bruise.

At least the atmosphere was lovely at the Lake Louisa state park where we cycled outside and by the lake! It was so freeing (and also kinda weird) to be cycling without watching Grace and Frankie or Shameless. I tried to soak it all in.

Once we got back to the house, we ate, reviewed film and promptly collapsed into bed. It was a long.ass.day and Tuesday would be more of the same!

Once again we were up and out by 7:15am, and once again we were outfitted with swim and run gear. I was more than happy to head to the pool and work on my new techniques. Plus, it was warm and beautiful already…

We quickly showered and headed to the 10-mile clay loop for our first off-track run. The loop is clay-like dirt and goes for miles in a nice loop with rolling hills. It’s flanked on all sides by orange trees and farmland. And one insane asshole that had a death wish.

Yep. And that video was not the worst of it. We were about a 1/4 mile up the road and had to run like hell back to our van, right before he came back around and almost flipped his truck when he took the corner. We called the cops and we’re pretty sure they caught him. #Florida

After that excitement, we headed back to our place for lunch and then back out for more bike drills. This time, Coach and Caitlin ended up in the bushes on top of each other. Ok, not like that, but they crashed into each other on their bikes. It was interesting. Everyone was ok. We moved on.

Our special treat that night was a private yoga and recovery class and then dinner at Root and Branch (literally the only nice restaurant in a 50 mile radius) for amazing shrimp and grits! And wine. Because recovery.

This was probably my favorite day because we were able to go on a long bike first thing in the morning!

The Van Fleet trail is 20 miles in one direction so, obviously we went to the end and then turned around and came back for a total of 40 miles.

We also saw alligators. Lots of them. Luckily, most of them were far away underneath a bridge where we could watch them from a safe distance. Unluckily for my heart, one was just off the trail in the brush and was HUGE! I may have screamed. I may also have been looking for them frantically for the next 35 miles.

We were supposed to do a 20 minute run off the bike but by the time we ended the ride it was almost 90 degrees! We literally ran about .25 mile and called it. After all, we still had to swim and do yoga!

We managed about 1,600 yards in the pool before we complained to coach that we might just fall asleep under water. She had very little pity but at least let me use a pull buoy and then had us jump out very soon thereafter.

Yoga felt amazing after the swim and we actually made it though dinner without being face down in the beer cheese fondue we ordered. It was quite an accomplishment.

There was so much good and I’m really glad I made the decision to go to camp! It was tough on my husband who had to work and take care of the kids for four days without me. And their school lost power one day and had a two hour delayed opening another. It takes a village. Or two parents. Whatever, we all survived.

Florida is not my place. It’s hot, dry, flat and, where we were, devoid of good food and atmosphere. #sorrynotsorry

I have never in all my travels seen more dismal Yelp options then I did in Clermont. The first night we ended up at a place called Rock N Brews where a Great Dane was roaming around aimlessly, smoking was permitted and a very loud drunk sitting next to us was yelling across the table to who appeared to be his in-laws, while his wife was breastfeeding what appeared to be his baby. It was 6:30pm on Sunday. #Florida

This is two-fold because there truly was no “ugly” on this trip but, some things just bummed me out…

I can say with 100% certainty that it was well worth the trip and I hope to get to do something similar again next year. If you’re my husband and you’re reading this, I’m just kidding.

How was your week(s)?

Have you ever done a training camp like this? Would you?