The Rundown – Getting Schooled 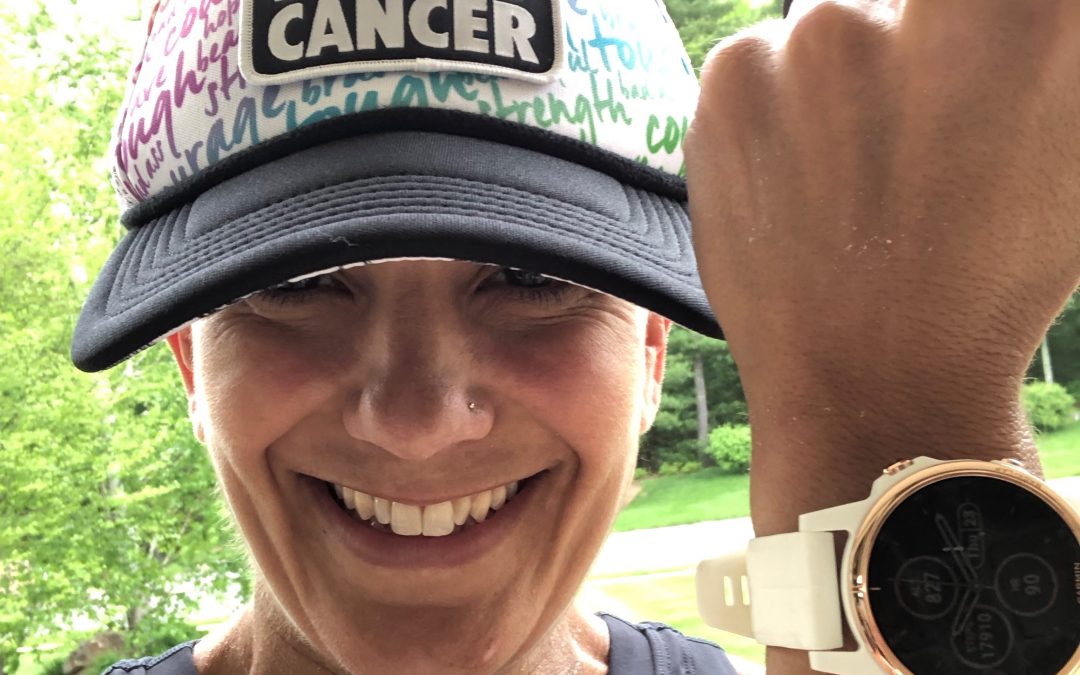 It’s been a beat since I wrote a rundown and in the time between I have been getting schooled! Not just by starting my first official class of my master’s degree in clinical mental health counseling, but in so many other ways. Also, my hair is getting grey-er…

I’ve officially starting upping my speed with the hopes of bringing it back. Mostly I have felt great and I have to admit, it’s always after I take a much needed rest day…or days.

Maybe it was the new Garmin fenix 5S plus watch that I finally put into good use? Maybe it was my highly motivating F*CK CANCER Betty Designs hat? Maybe it was running though a Memorial Day parade on Monday or helping a stranger find her lost dog on that same, oddly eventful, tempo run?

Whatever it was, I was feeling great last week.

Tuesday – 10×200 on the indoor track | I consistently nailed each 200 in 40 seconds and, consistency was exactly what I was looking for after Monday’s hard effort | 5.13 miles total

Wednesday – 15 minute warm up run before strength and swimming | 1.50 miles

I didn’t get a chance to ride much but the one day I had, I made the most of! I also took some time to properly hang my bike in the garage. It took me longer to figure out the drill then to actually hang the bike. #schooled

I’m definitely losing my mind. Remember that time not too long ago when I forgot my pants at the gym? Well, guess what happened last week? Not nearly as bad but I completely forgot my entire swim bag! My excuse is I was solo parenting, starting my first day of school and was running, doing strength training and swimming that day…but still.

Luckily a woman who I’m friendly with at the gym asked me how I was doing, to which I responded “I was doing great until I realized I forgot my entire swim bag!” She graciously offered to lend me her suit, cap and goggles. Amazing…and kinda gross I know but it was way better than going home for my suit! I will now keep a spare suit, cap and goggles in my swim bag. #schooled

Speaking of being schooled. Antwan kills me every week with new and torturous things, that it’s amazing I don’t drown in the pool afterward.

We cleaned off the kayaks and took them out on the lake, went to Mystic and had a few cookouts enjoying the amazingness that is the start of summer!

And then it rained for days but such is New England…

I also finally invested in an inflatable SUP. I have yet to test it out but will report back as soon as this weather cooperates again. Could be a while…

Although I loved my first graduate class, the topic is counseling diverse populations so the discussion is ripe with emotion. The instructor is also the chair of the department, who has been teaching the class for 20 years and she doesn’t pull her punches. We dove right in which was fantastic and also terrifying.

THE GOOD: I’m not the only elderly person in class. Life experience is huge in this setting. I remembered to bring my laptop to take notes instead of really showing my age and having a pen and paper (side note: only four out of 12 had laptops) and I stayed wide awake for the entire class which doesn’t end until 9:30pm aka my bedtime.

THE BAD: I have not yet felt as old as I did being in that room, even with the two other older students. The youngsters were fascinated with my twin mom status but in a way that was like looking at Donald Trump in white shorts – it’s horrifying but you keep looking. I don’t have my student ID yet and the building was locked so I had to wait for someone to let me in. And it was raining. The instructor told a story that included a reference to a “45” and one lone student guessed “is that a…record?” Kill me.

After a full week of staring at the box, I opened my shiny new Garmin fenix 5S plus and put it on!

LOVE: The best features are being able to listen to music/podcasts without my phone, built-in heart rate monitor, more apps for more activities like strength and cardio training as well as bricks like swim/run or bike/run, maps and GPS so I can confidently go trail running, a better calendar, Garmin pay and ease of set up!

HATE: I’m still figuring out all the kinks but the distance I can travel away from my phone before it’s disconnected seems to be MUCH smaller than it was with my old one. It’s very annoying to constantly get “disconnected” and “connected” messages when I’m walking around my house!

I had to buy a subscription to Spotify in order to download music. Not horrible but not ideal for me.

Because it can do all these new and wondrous things the battery life kinda blows. I did a 10 mile run (about 1 hour and 20 minutes) while listening to a podcast and it drained 25% of the battery. I guess I have to get faster or go without a podcast. #nothappening

If have yet to hear about Dead to Me on Netflix, crawl out of the hole or rock from which you have been living and watch it immediately.

I have always loved Christina Applegate but I truly wish I was the one living in her pool house.

The plot is fantastic, the things these women say and do are actually real and relatable and one of them is a runner. #micdrop

It’s been almost eight months since I’ve had an issue with Claire. In case you don’t know, Claire is the name of my overpriced SUV that has been nothing but a problem from the day I bought it. Here’s the latest:

A rock hits my windshield at some point and a long crack appears.

My insurance schedules a company to come out and repair it.

That is a rip right in the center of my dashboard. Whatever tool he used on the windshield tore a hole in my dash and either he didn’t notice or he didn’t tell me.

I know it’s small but this car is leased and it’s RIGHT in the middle of the dashboard!

The glass company is sending someone out to fix it so I’m just hoping they somehow light the whole thing on fire (which is in the realm of possibility given what has happened with this car) and then I can get something that isn’t cursed.

My son even included this very accurate rendering of Claire in his mother’s day card to me. I will treasure it always.

I think he’s the bird trying to fly far away. And clearly he needs to be schooled on his spelling, but you get the idea.

Here’s to a week of knowledge, speed, packing all necessities for the gym and having some perspective on aging!

What have you been schooled in lately?