The Rundown – Platinum Effect: Do Blondes Have More Fun? 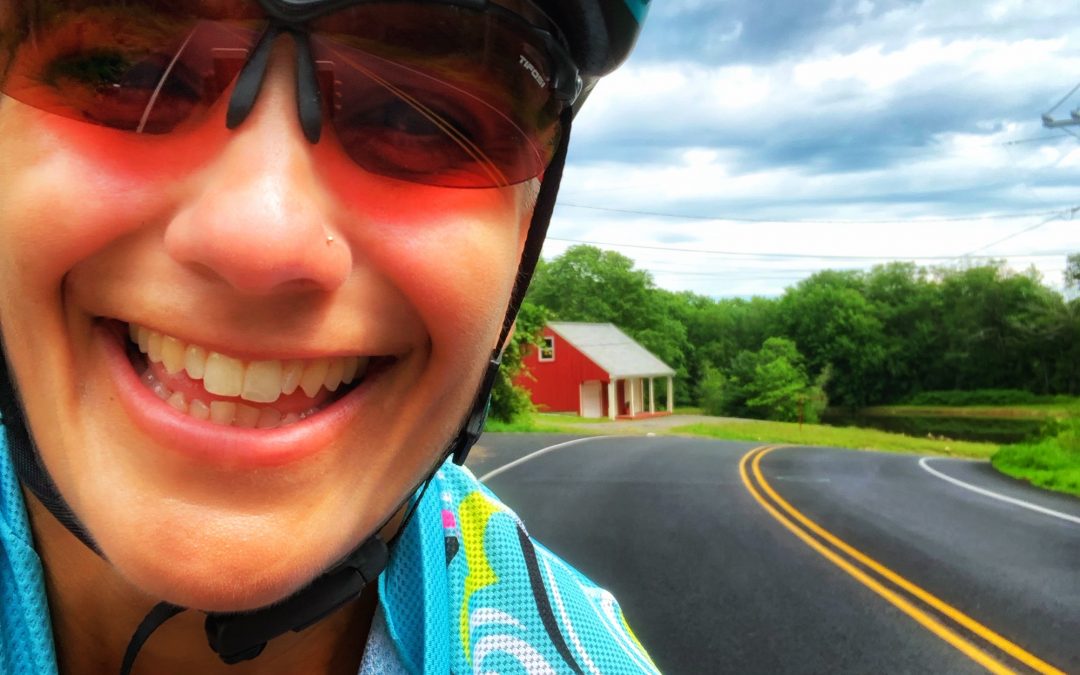 There are so many things I thought I would never have – twins, a master’s degree, cookbooks (that I actually use) and platinum blonde hair. Well, never say never my friends…

I honestly do not really know how this happened. It started with an idea of growing out my grey because I was sick to death of coloring it, and turned into wanting platinum blonde hair. It’s been an interesting experiment of sorts.

I’m happy with my progress though and I know suffering though all this heat and humidity will pay off in my fall half marathon…but will it help in the mountains of Vermont? We’ll find out in about two weeks.

Cycling is such a better option in the heat! I was so happy to get out on my bike especially since I have been looking forward to riding on a freshly paved road right near my house. This road has been a pothole disaster for years and leads to one of my favorite routes. To say I was excited about the new pavement was an understatement.

The things that cyclists get excited about… No wonder people hate us.

Being blonde. Yes, it’s a little weird and every time I catch my reflection I freak out a bit, but I really do love the color and it’s fun for the summer.

My 4.0 GPA. Ok so I had one class but right now my graduate GPA is perfect. Haters back off.

Student discounts. Lately, while online shopping, I noticed a new button in the checkout details…ID.me! By registering as a student on the website (which was very easy and took less than 3 minutes!) I get up to 40% on a ton of stuff. #mindblown

HOKA Recovery Slides. You think Oofos are good? You will want to throw them out after your tired, sweaty, blistered, black-toenailed feet get a load of these…

I bought a pair for a friend and my husband and although they are kinda hideous looking, you will not give one shit because your feet will be in heaven.

Being blonde has not helped me have more fun at the gym, where I’ve been trapped a few times because of the heat. Here are some of the ridiculous and disgusting things I’ve witnessed from other members:

Finally, one last pet peeve of mine has nothing to do with the gym but the overuse of the word “unpack” as in “let’s unpack what you just said because there’s a lot to dissect there.” I read it in text, hear it in podcasts and on the radio and it’s time to stop. Please. #makeitstop

The new season of Comedians in Cars Getting Coffee is amazing. Jerry Seinfeld has somehow upped his game and, although we have only watched a few episodes, they were absolutely hilarious, starting with Eddy Murphy!

I was disappointed with season 3 of Stranger Things and have yet to watch the last 38 minutes of the season finale. I fell asleep watching it (which tells you something) and its been over a week and have yet to go back and finish it. Lame.

Big Little Lies and Handmaid’s Tale continue to be captivating and I just started watching Queer Eye (I know. I’m the last one) and obviously I love it. YEASSS QUEEN!

So.many.books! I’m mostly excited for vacation so I can read. It’s not like I don’t have time now but it’s so much better with the ocean in the background. And, since we’re going to Cape Cod where there’s a freaking shark fest, I won’t be swimming, and will therefore have more time to read.

For the female who is fed up (is any woman not?), and needs a reminder of where she came from and how to find her fierce, I highly recommend this gem…

But if you’re looking for something a little lighter, I can kind of recommend Searching for Sylvie Lee by Jean Kwok. I say “kind of” because I’m not finished and also because it started out really intriguing and intense and has fizzled a bit. I’m still reading because I have to find out just what the hell happened but I’m not sure it will be satisfying. So, proceed with caution.

RANDOM TIDBIT OF THE WEEK

In case you were wondering (as I was) where the phrase “blondes have more fun” originated, it can be attributed to one woman — Shirley Polykoff. Below is an excerpt from her obituary (she died in 1998 at age 90!) from the NYTimes:

“Shirley Polykoff, the pioneering advertising woman who came up with a single double-entendre that changed the face, or rather turned the heads, of American society, died on Thursday at her home on Park Avenue. She was 90 and the author of the ”Does she . . . or doesn’t she?” slogan, which unleashed American women to choose the color of their hair.”

“In an era when hair color is no longer a fiat of nature but a routine fashion choice, it is easy to forget that as recently as the mid-1950’s hair coloring was such an exotic exception to a cultural norm that only 7 percent of American women dared dye their hair, mainly actresses, models and other fast women.”

Well, I like to think of myself as a “fast woman” so obviously I made the right decision. Thanks Shirley.

Are you or have you ever been blonde? Ever thought about it?

What grotesque or annoying things have you witnessed at the gym recently?