The Rundown – Slow Your Roll and Check Out My New Site! 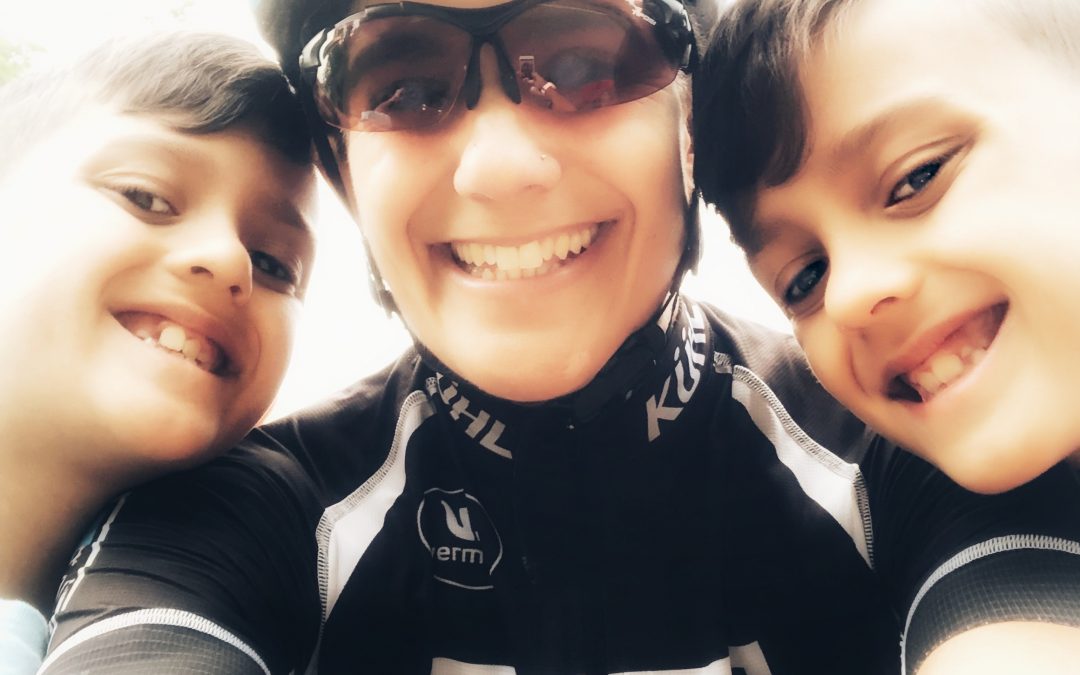 Welcome to the newly improved VITA Train 4 Life blog! All the content is basically the same, but I have combined my freelance writing site (allieburdick.com) into one gorgeous new package right here. Please take some time to browse and let me know if there are any glaring mistakes or broken links so I can yell at my web designer.

These past two weeks have all been about life after big goals, moving slowly into summer, surviving two nights in a tent and embracing change as best as any die-hard, type-A woman can. Cheers! 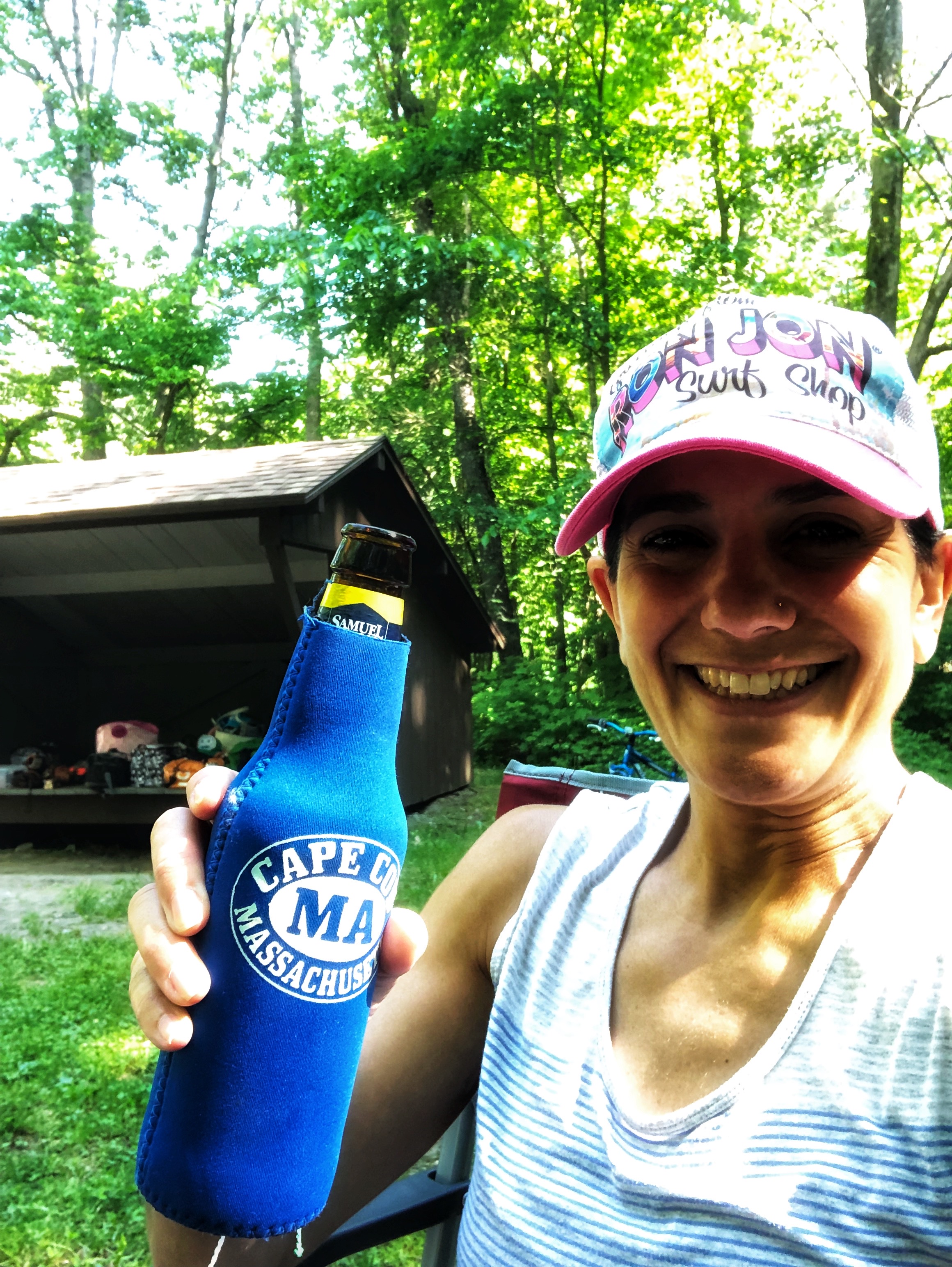 There has not been very much running or anything else that involves serious physical activity around here and it’s been amazing. First of all, it took about two weeks for my cold to finally leave me. After the 70.3 my body was pretty pissed at me and showed it in the form of a hacking cough, extreme fatigue and massive congestion. At least I finished the race. #priorities

The running I have been able to do has been easy and short and absolutely lovely. I’m enjoying the lull in between race and relaxation.

And, of course, I keep replaying this moment in my head… 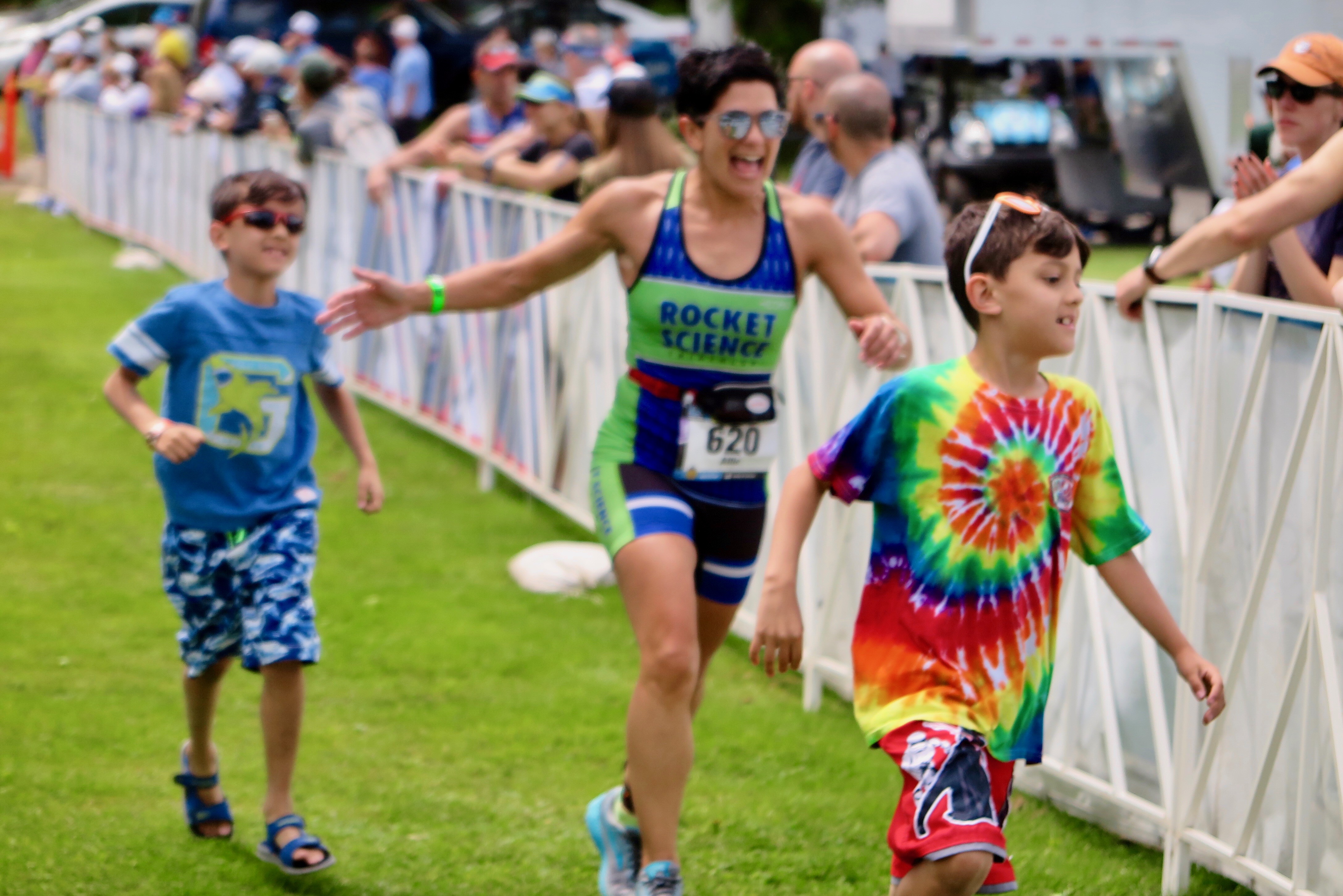 There is no better time of year to get out and ride! I have been enjoying some shorter, easier, smell the flowers kind of rides and even some with my kids, and it’s been great. I’m dying to check out some routes in Vermont since every time we are there, there seem to be cyclists everywhere! Show me your ways green mountain cyclists! 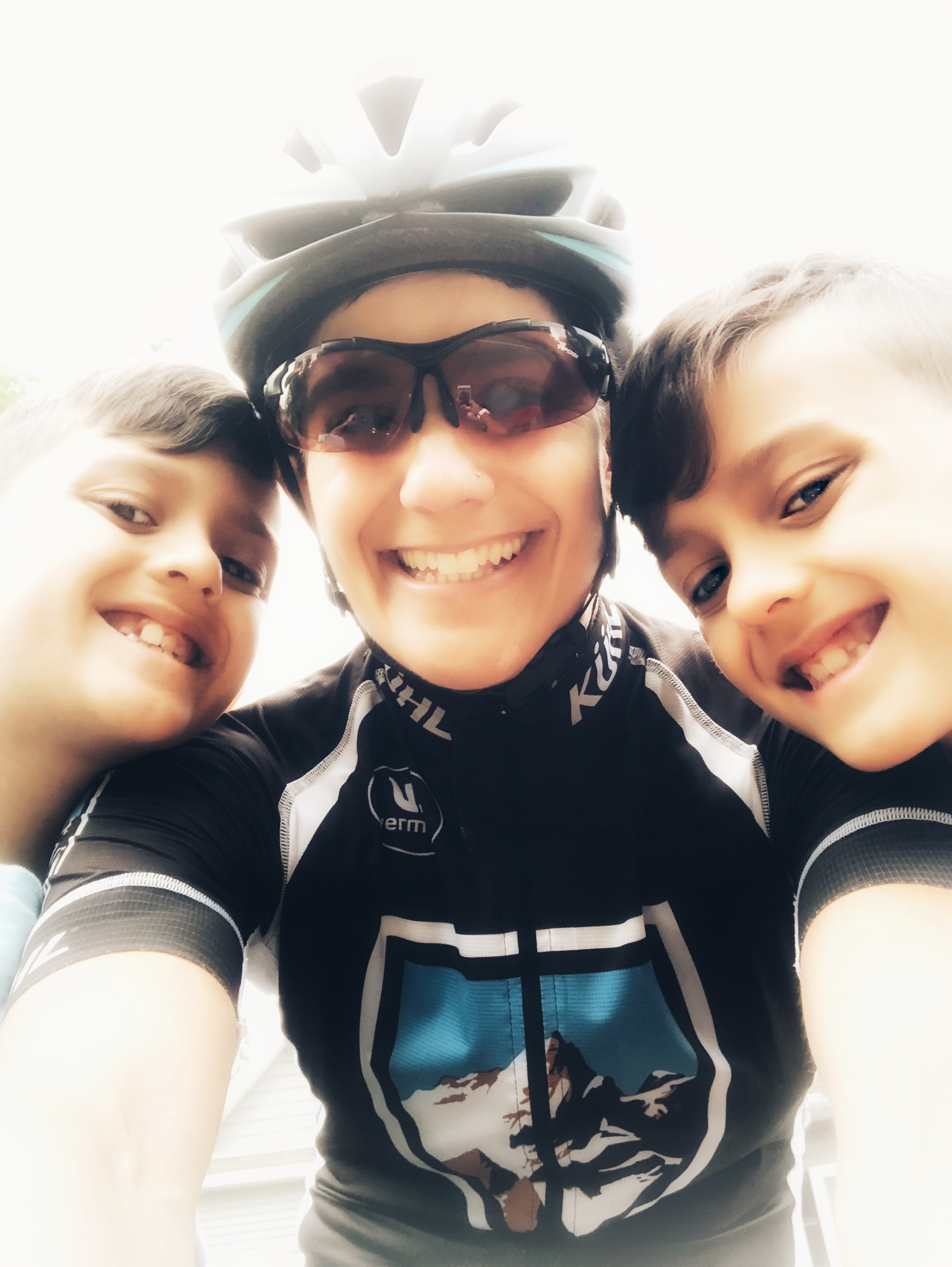 Would you believe I’m swimming in the lake for fun? I have no idea how I made this transformation but I’m so happy I did! I’m also enjoying some SUP and kayaking while I’m at it since you don’t have to always be fully submerged to get a great workout.

My dad and brother putting the fin on my dad’s new fishing SUP. My dad is searching YouTube for a tutorial, naturally.

I’m adding it as a physical discipline because it absolutely is! My dad and brother love camping and, I love them, so off we went to Vermont for three days of living in the woods like heathens. The campsite was fantastic, complete with a gorgeous lake and shallow river bed which the boys used as their personal lair. My sons and nephew only emerged from said lair to fish and get marshmallows. It was truly a boys heaven and I was just happy to be there. 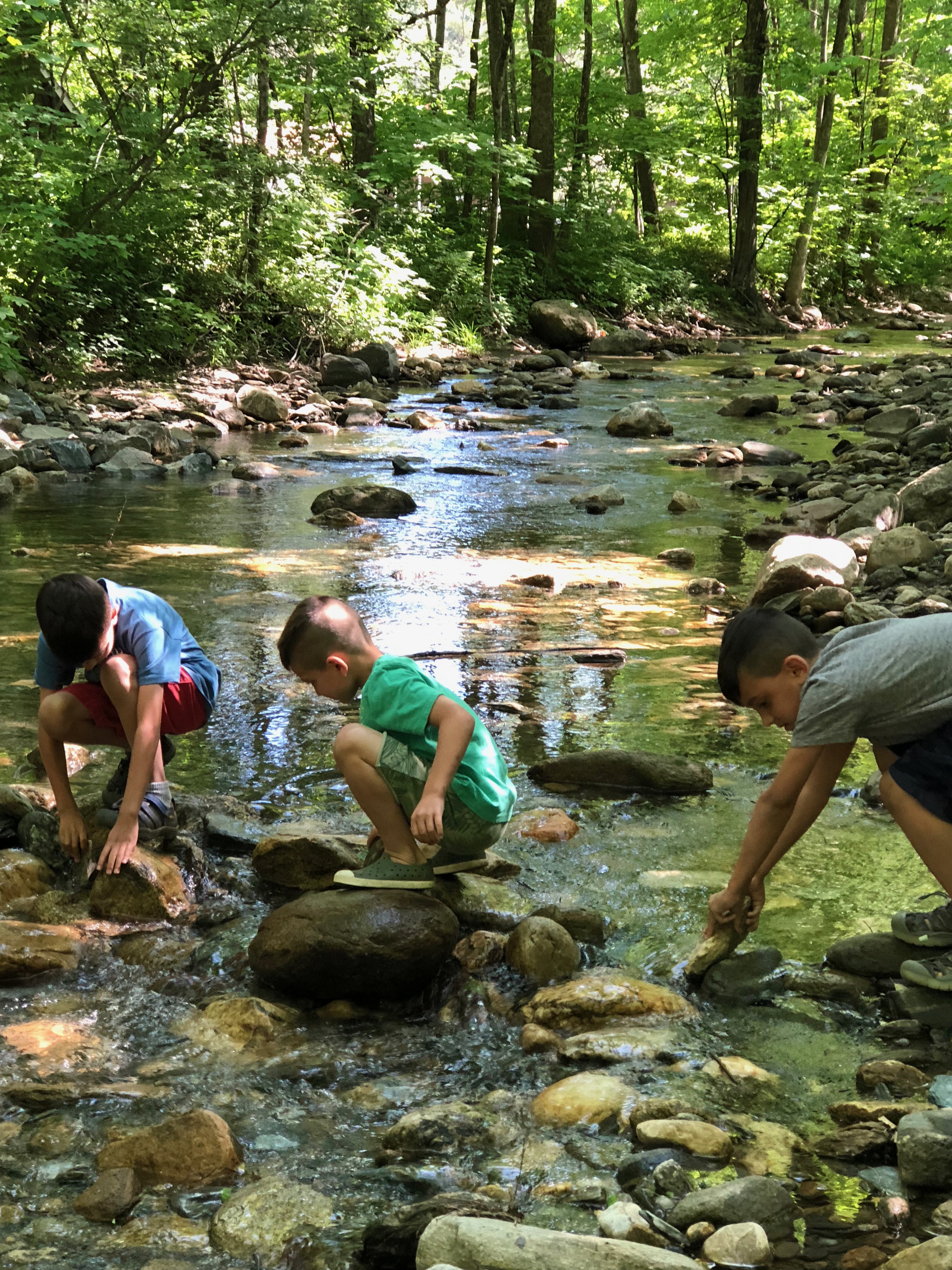 One of the highlights was Vaughn catching his first fish! He was so excited but wouldn’t go near it! Luckily, his younger cousin is obsessed with fish and fishing and was more than happy to help. 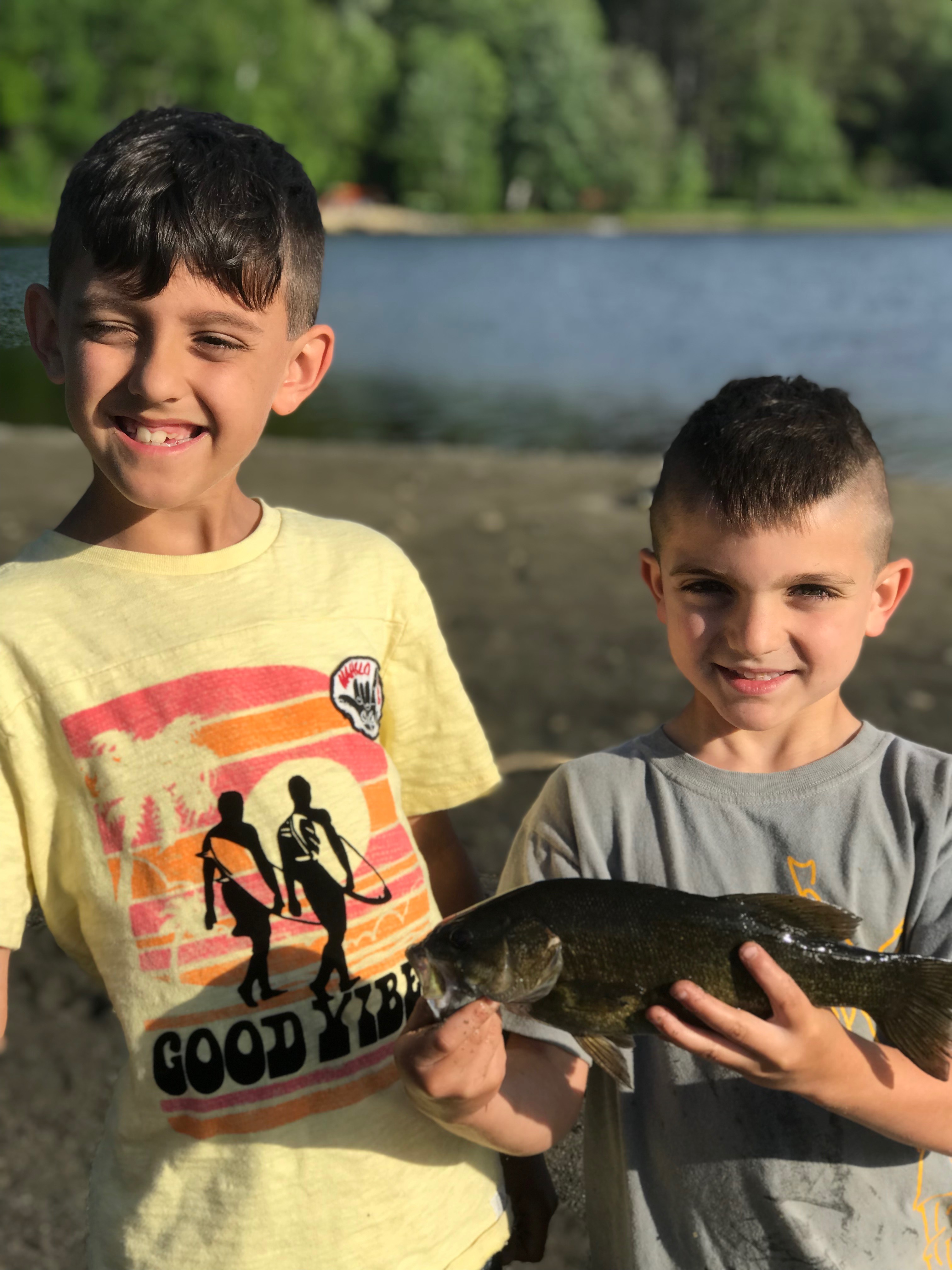 Like anything else, camping can be great if you have the right equipment and right people. Check and check. Oh and hot coffee and a campfire first thing in the (freezing) morning!

The story of Tim Don, the man with the halo.

Great Britain’s Tim Don is a three-time Olympian and World Champion in Duathlon and Triathlon. This guy is a beast and dominated the triathlon world until, in May 2017, just days before he would race the Ironman World Championship in Kona, he was hit by a car on his bike.

The documentary created about his journey back, and the seemingly medieval torture device he chose to wear for months, culminating in his first ever running of the Boston Marathon this past April is nothing short of astounding. Need some motivation? Watch this two minute trailer then go to YouTube and watch all 28 minutes.

If you’re having a bad day, just be thankful this is not your bathroom. It was mine for the three days of camping and there are things I will never be able to unsee. 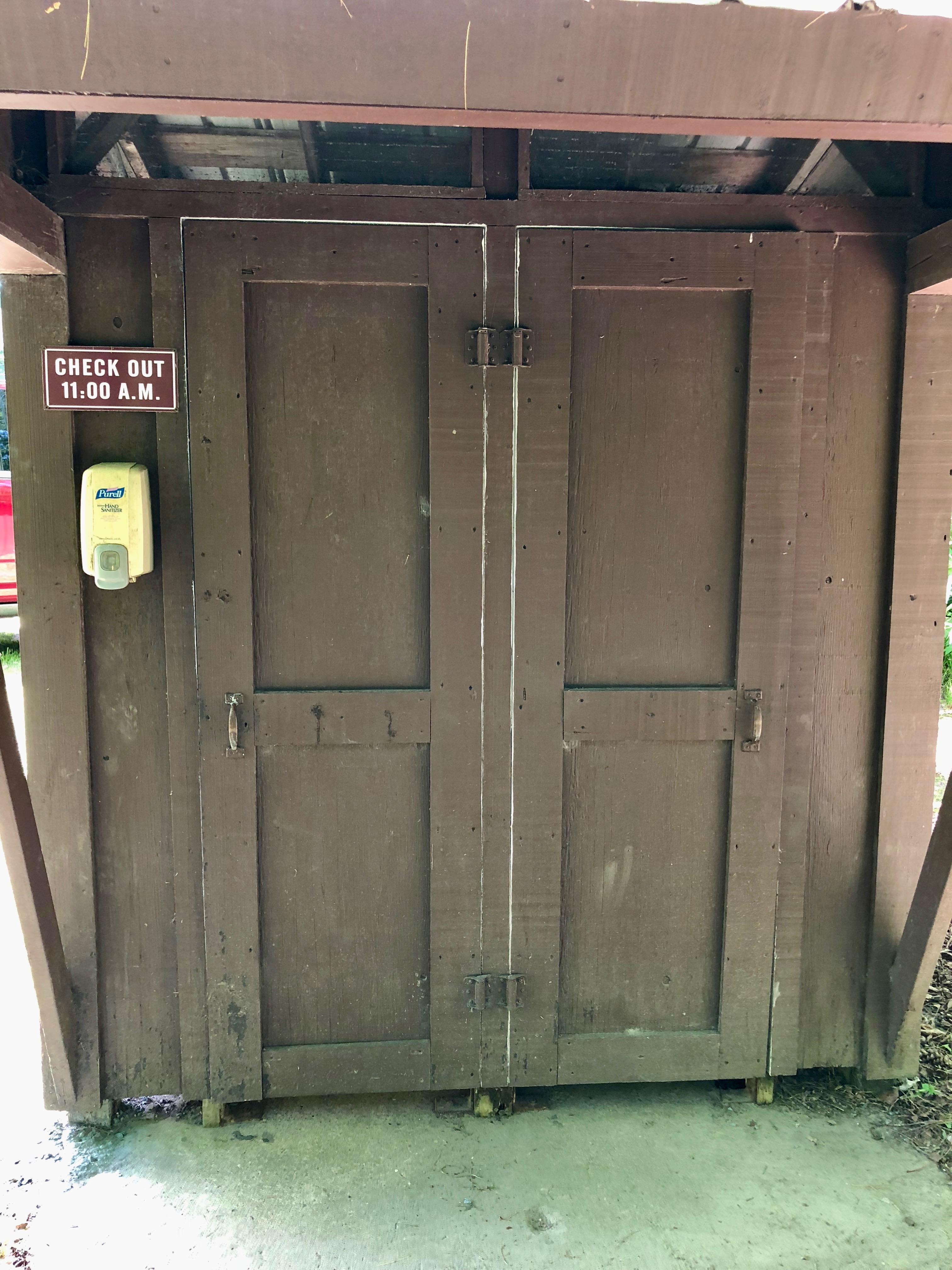 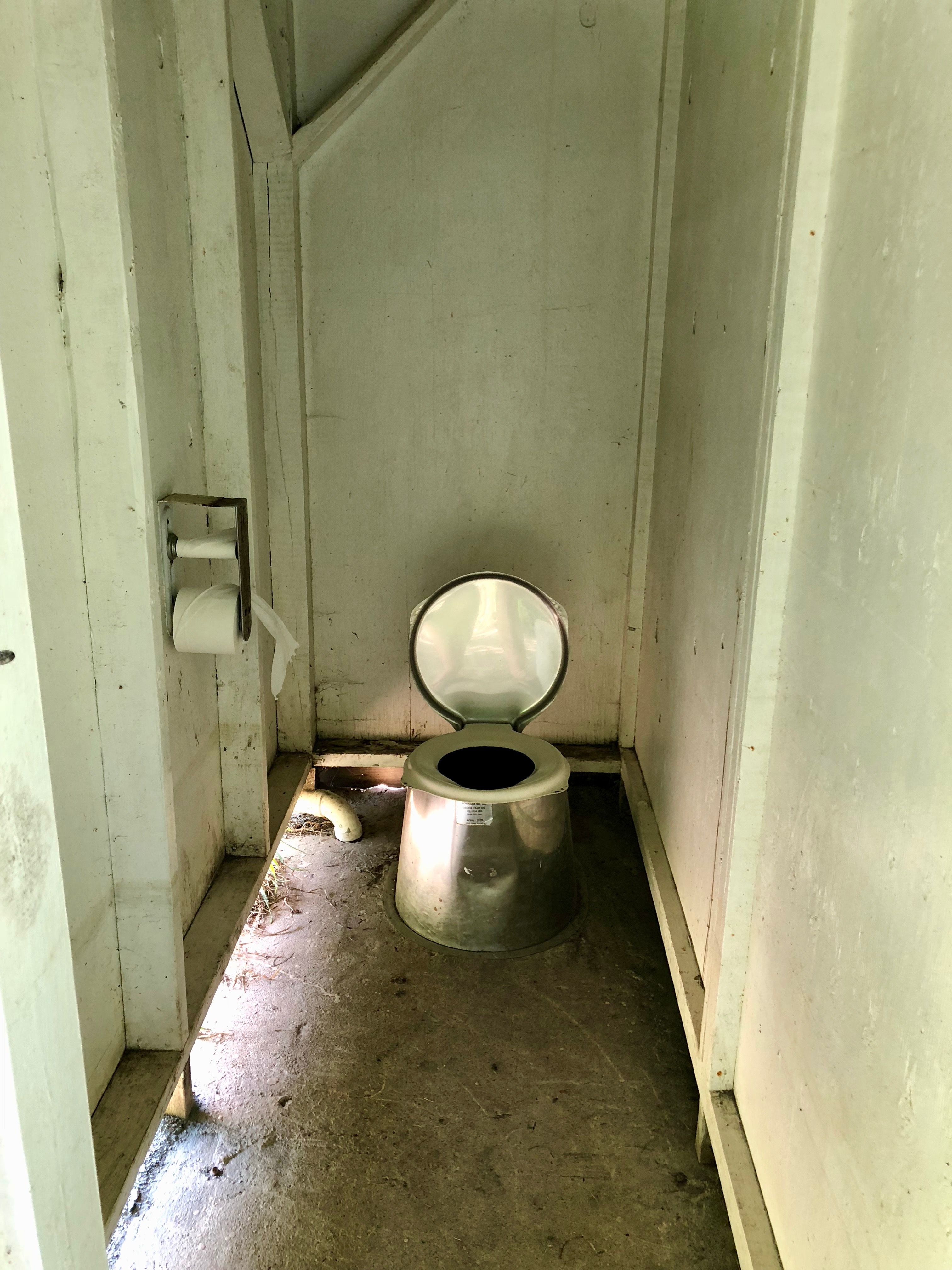 Just before my first Half Ironman I was a mental mess. I was mostly confident until I starting coming down with a cold. I immediately flooded my consciousness with nothing but mental positivity and that’s when I came across the story of Jesse Itzler and his detailed (and hilarious) account of living with a Navy Seal for a month. 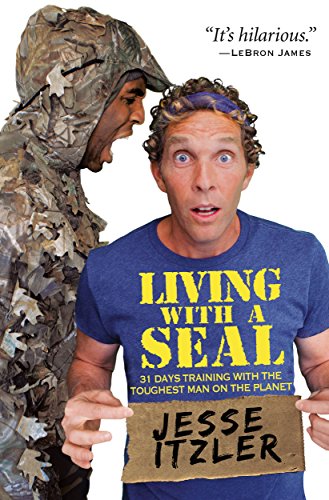 At the time the book was written (2010), Itzler only refers to his new roomie as “SEAL” which makes passages like this that much funnier:

“I’ve never been the greatest flier (which is ironic since I started a private jet company)…to say the takeoff is bumpy doesn’t capture the experience…it’s a nauseating roller coaster…the plane is being tossed around like a pinball from side to side…in between free falls I glance over at SEAL, he’s still in the same running shorts and t-shirt his ran in this morning and he’s reading Sports Illustrated…I’m not sure SEAL realizes we even took off yet as he casually flips though the pages of his magazine, he is unfazed…20 minutes in the turbulence is so bad I’m convinced we’re going down, beads of sweat are pouring down my forehead and my palms are drenched but SEAL doesn’t flinch, he’s just reading, casually flipping though pages and yawning…finally we are wheels down and I’m ecstatic we are on the ground in one piece…SEAL couldn’t give two shits…he turns to me and says, “Great flight.”

Itzler is one of the wealthiest people on the planet and his wife happens to be the creator and founder of Spanx. Together these two have more money than the Kardashians and SEAL is great at making Itzler comfortable being uncomfortable which is exactly what I needed.

“Enjoy this shit,” SEAL says as he is dressed in shorts, a t-shirt and gloves for a run in 16 degree temps, “If you want it to be 70 and sunny…it’s 70 and sunny. Just run. The elements are in your mind. I don’t ever check the temperature when I run. Who gives a fuck what the temperature on the computer says? The computer isn’t out there running is it?” 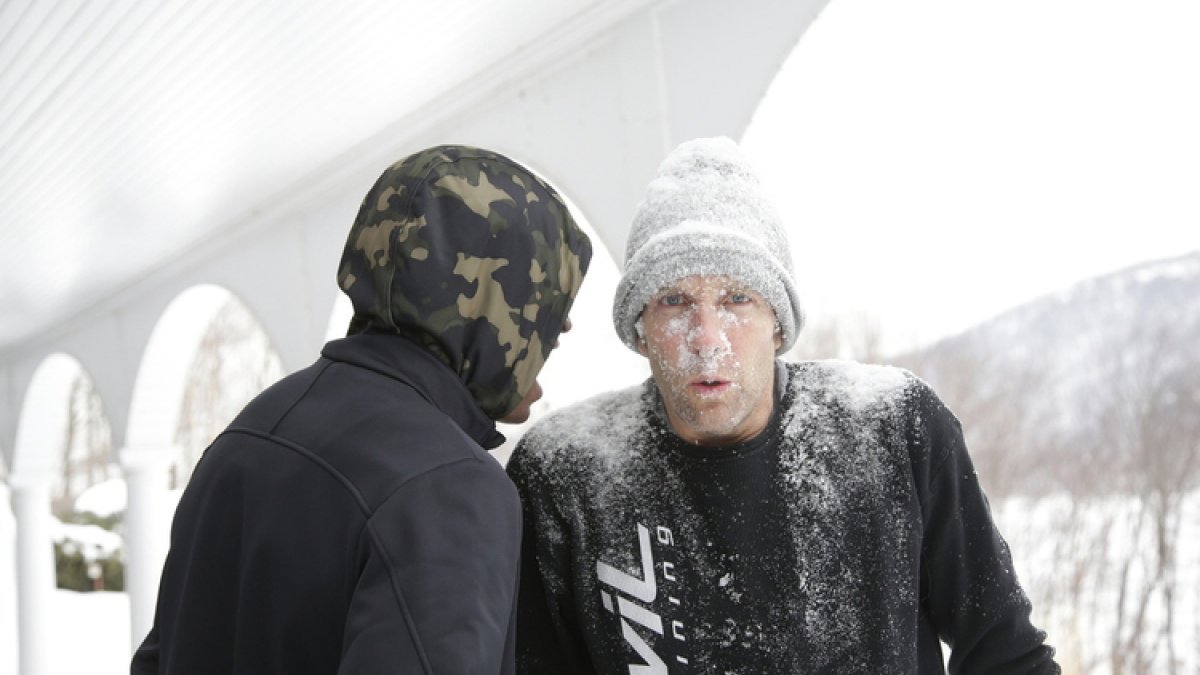 Itzler and SEAL after he made Itzler run in a blizzard at his lake home in CT. Source: jesseitzler.com

It’s a quick read, so interesting, inspiring and funny that you can breeze through it on a summer day. A word of caution: SEAL will haunt you. I found myself thinking about him, the man we now know is David Goggins, throughout my Half IM!

RANDOM ITEM OF THE WEEK

Vaughn came home with this last week, a sure sign that school is almost out for the summer: 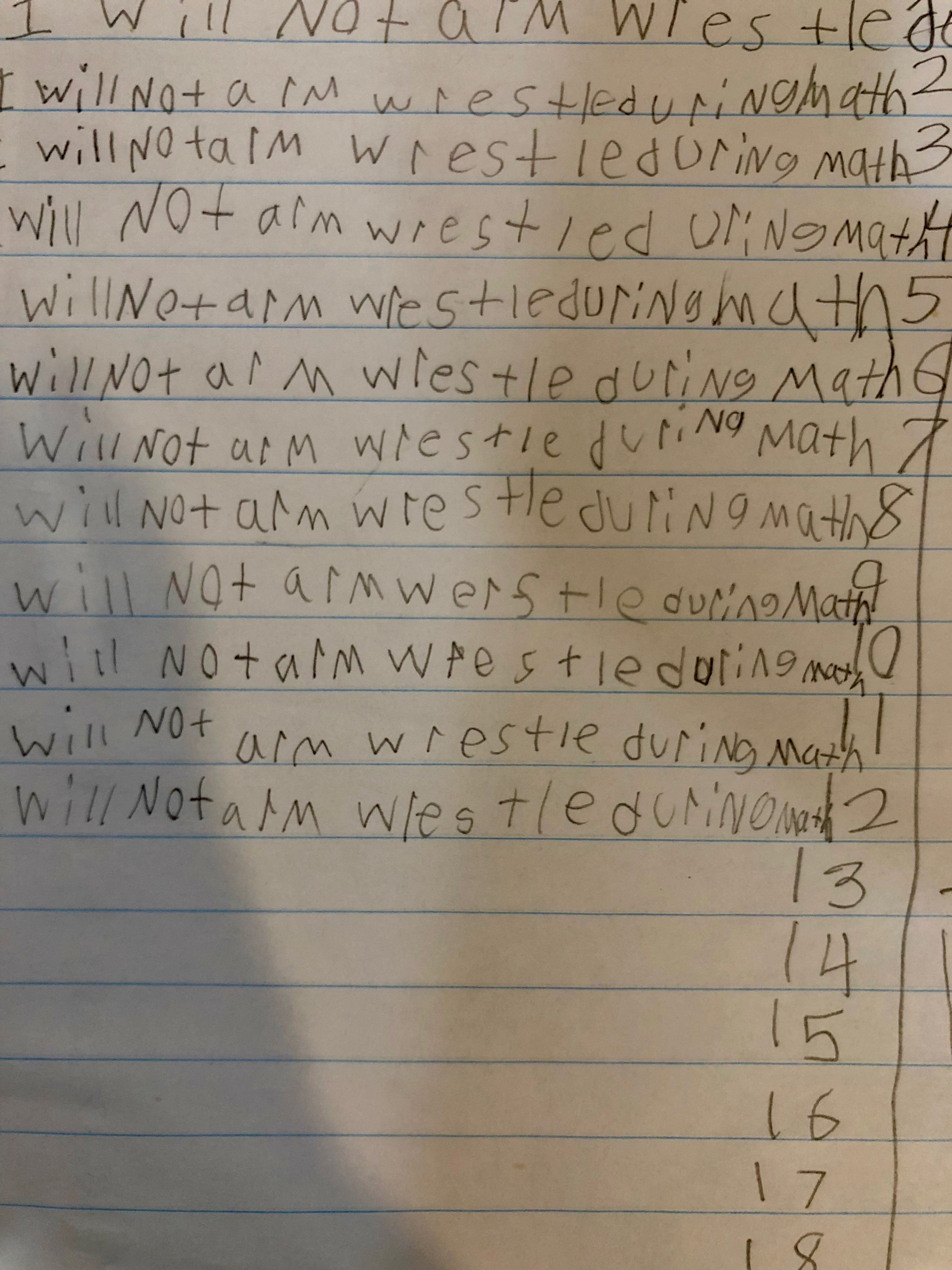 I will not arm wrestle during math x 50

[Tweet “The Rundown has a fancy new site design, is slowing down after a #goal #race and camping in the woods!”]

A huge shout out to my web designer Tony Pallotta of Up Early Designs who makes the magic happen here and who led me though every step of the technologically laden process of updating VITA. I cannot recommend him highly enough!

Next stop – Colorado! I’m off to Denver with my husband for a short trip. Check out my Instagram this week and see if you recognize anyone in my feed…I have big plans for high altitude training! < – – They mostly involve not vomiting but maybe I’ll surprise myself.

Are you slowing down for summer?

Thoughts on my new site design?

What’s the last best motivational book or video you have seen?