The Rundown – So Many Questions! 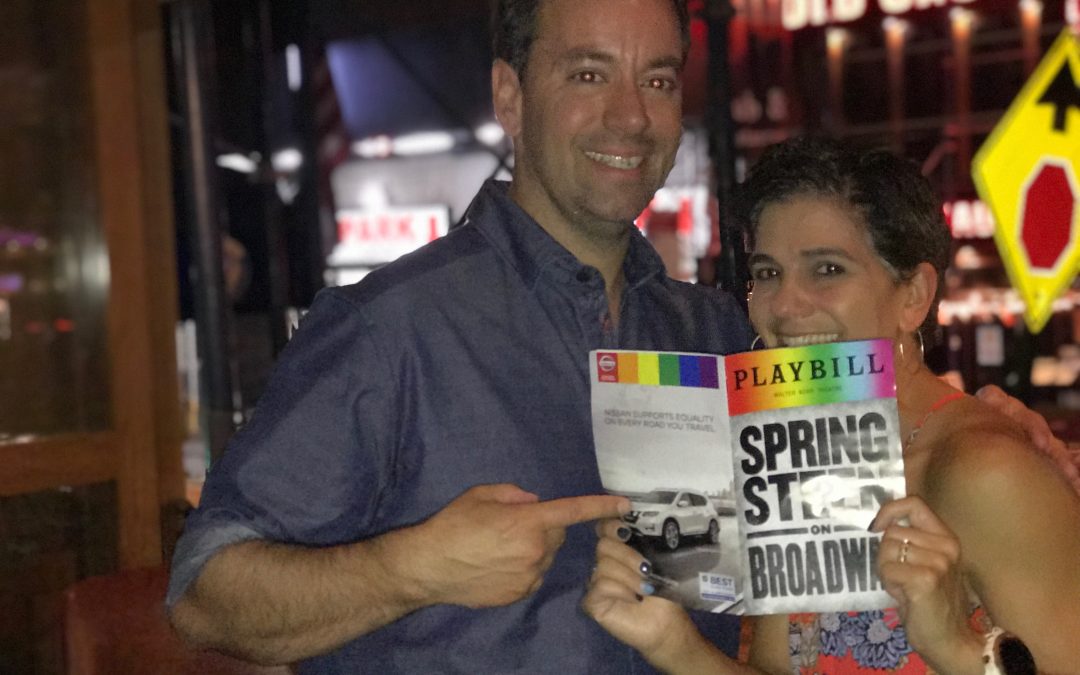 It’s barely July and I have so many questions. Should I do another 70.3 at the end of the summer? Is it safe to run outside when there’s chance of a thunderstorm? Are my kids having fun at camp? Should I start one of the 100 writing projects in my head? Why does customer service suck so badly? If I’m “just” training without a race goal, is that enough? And on and on and on…

As a planner of everything I’m having a hard time having no plans. Or am I? So many questions. 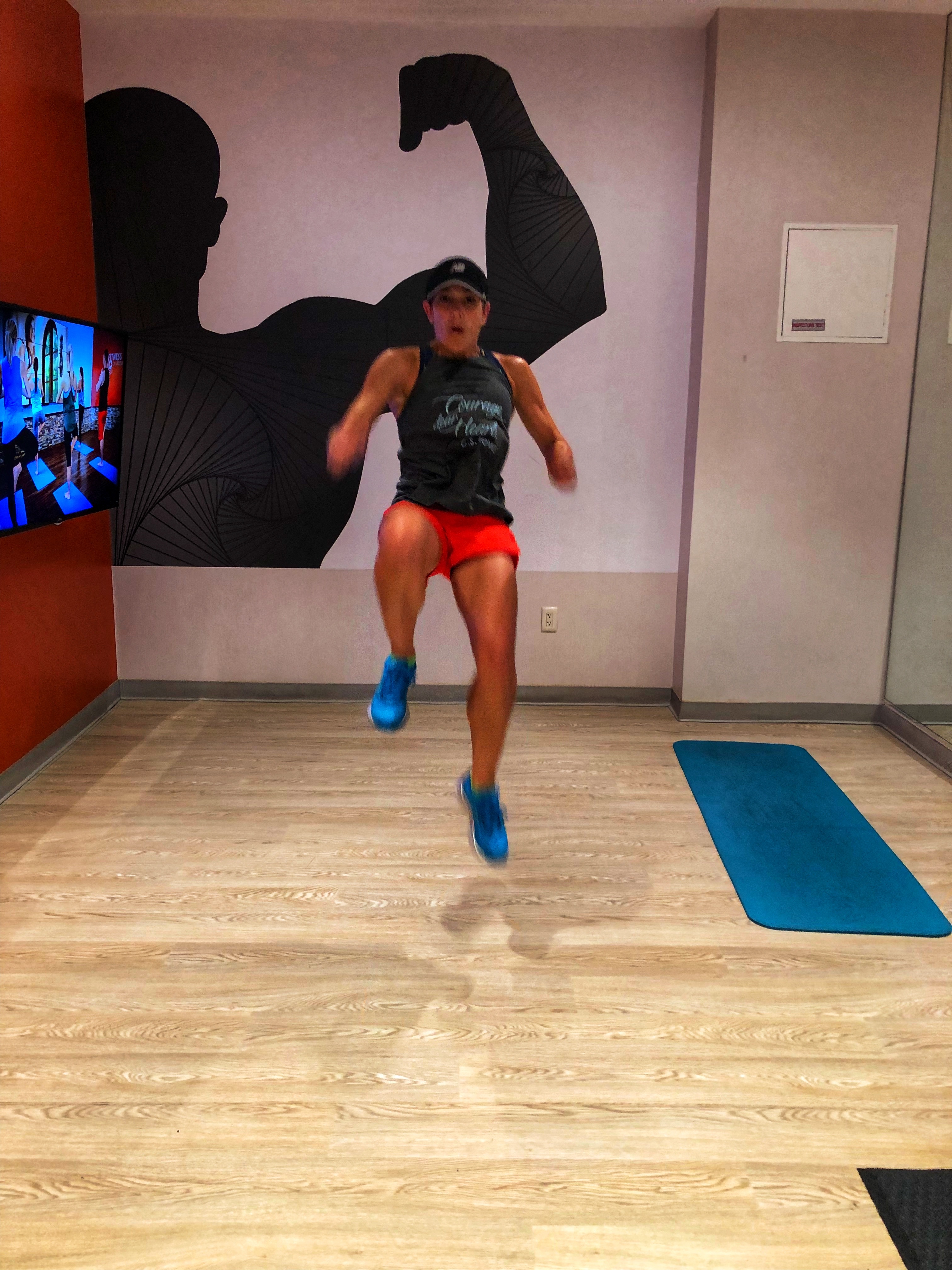 You may be questioning what the heck I’m doing in this picture? Jump kicks, and bad timing of a photo.

Question: Is it dangerous to run outside if there’s a chance of a lightening storm and it’s currently pouring?

I’m so far removed from even thinking about running on my treadmill that I almost went outside during a threat of thunderstorms. Almost. I didn’t have the option of waiting until they cleared so I found myself doing intervals on the treadmill to the sounds of thunder. It wasn’t horrible.

Overall, running has been a little sluggish but I’m slowly getting back into training just in case I want to do another race…or two. We shall see.

Question: Is riding for 2 1/2 hours a big deal when you haven’t done more than 1 hour in two weeks?

I had one long ride of 40+ miles and I didn’t think much of it, until my low back started screaming at me, 30 minutes from home. I’m not sure what happened but luckily I had a massage scheduled for the same day. When my long-time massage therapist had her elbow in my hamstrings and afterward said “I felt like I was kneading clay!” I kind of figured it out. I guess I need to be better with stretching and rolling out my hamstrings. Ouch!

I also dropped my chain on that same ride and had grease all over my manicure. This is why I can’t have nice things. 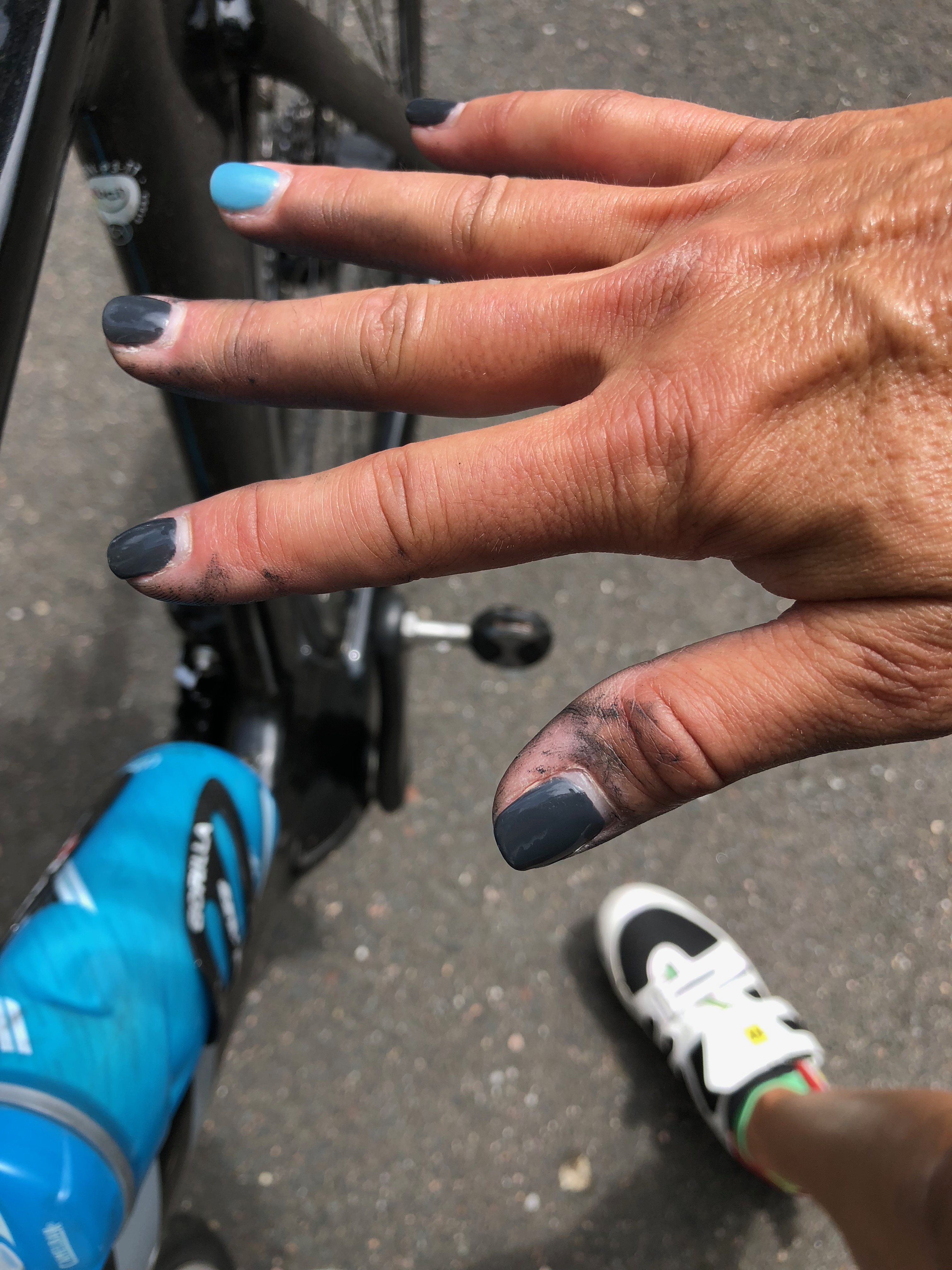 Question: How long has it been since I swam and does it even matter?

It was so nice getting back into the pool after about a week of nothing but running at altitude and strength training in Colorado. Being rested and doing endurance swims is a little slice of heaven. I enjoyed these workouts as much as anyone who really doesn’t love to swim can.

Question: Can you change your mind about a musician you haven’t cared less about for 43 years with one performance?

Bruce Springsteen is an American icon and most people cannot believe it when I tell them I’m not a fan. Part of the reason is years ago when I worked in corporate America, a super annoying co-worker absolutely loved “The Boss” and made sure everyone knew it, with his hideous cubicle shine to the man. This solidified my indifference to every Springsteen song ever played.

However, after seeing Bruce Springsteen on Broadway I have completely and totally changed my mind. The man is a genius. He was sensitive (I cried at least three times), intelligent, an incredible storyteller and one hell of a musician. He spoke so openly about growing up with a father who battled depression, a mother who is now 93 and in her seventh year of Alzheimer’s, and how many lifetimes he believed he has lived with Clarance, his lifelong sax player who died in 2011. 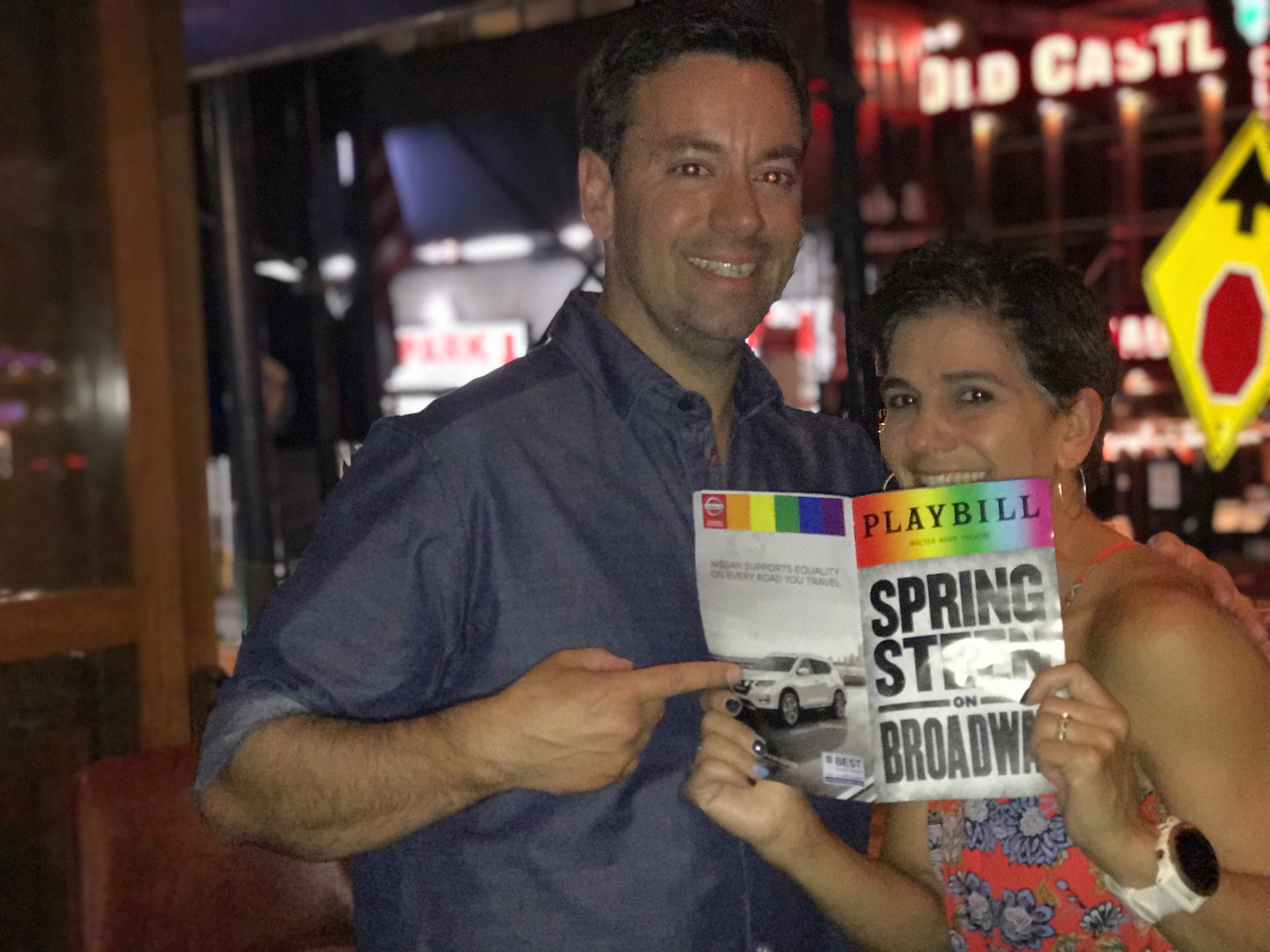 I have to thank my husband for loving Bruce all his life, which motivated me to buy the tickets to the show, as my 12 year wedding anniversary gift to him. Looks like I was the one who received the gift. Thanks Bruce!

Question: Does anyone want to take my money?

All I tried to do this week was buy a car and pay a cable bill. I couldn’t do either because people are morons and some companies are run on process with zero common sense.

As some of you know, my new car is cursed and has been back to the deanship for a plethora of issues, four times in eight months. I test drove a new car. I gave the sales guy (we’ll call him Bill, because that’s his name) the paperwork on my current car so he could “run the numbers.” I made an appointment with Bill for noon on Tuesday and when I pulled into the parking lot of the dealership at noon on Tuesday he texted me he was “busy with other customers so please wait in the lounge.” Ok. After 10, 15, 20 and then 30 minutes he told me he was sorry but couldn’t meet with me and let’s reschedule. I have not heard from him since.

I wanted to run back into the dealership, a-la Pretty Woman and just yell “Does anyone want to sell me a new car? Anyone? I have money to spend here!” Don’t worry Bill, I will be back with a new car and will go all Julia Roberts on your ass, including asking you if you work on commission. Big mistake, Bill. Huge!

As for the cable bill. The cable company is actually sending me a paper bill. In the mail. The regular mail. They seriously could not figure out how I could pay my now overdue bill online since there was an issue processing my account. I was on the phone with them for 45 minutes. I just can’t even.

Question: Is there any original television out there I haven’t seen that is actually watchable?

Every once and a while I take the bait and click on articles for “10 Best TV Shows You’re Not Watching!” I actually saw some promos for this one but it wasn’t until I saw the trailer (and my husband was out of town) that I decided to give the show a chance.

Dietland is one of the more interesting things I have seen in a while, for so many reasons. It’s like a female gang version of Dexter. I love the main character Joy Nash (as Plum Kettle) and also, oddly, Juliana Margulies (as Kitty Montgomery), in a role that suits her, and the stereotype of an editor of a teen fashion magazine, perfectly.

Yes, it’s about body image, fat shaming and struggles all women have to endure on some level but it’s also about empowering yourself, the #metoo movement, questioning societal views on what is beautiful, supporting other women and exacting revenge on those who deserve it most.

The full season hasn’t aired yet (I have two episodes left!) but so far, I’m loving it.

Question: Do I really need another fitness app?

I don’t have a ton of apps on my phone but the majority of them are fitness and/or weather related. I recently saw someone post a very cool video of a bike ride on Facebook and I instantly checked out the app, because you know your training doesn’t really count until you post a recap of it to social media.

The app is called RELIVE and I have no clue how much it costs. #sorrynotsorry

Relive is even cooler when you do a long ride or run with friends and take pictures along the way. I obviously don’t live in the most exciting place but the more “landmarks” that pop-up, the cooler the video which makes this a great option for recording rides and runs on vacation.

Question: Do I want to do another race (or two) over the summer?

I’ve been wrestling with this one since 24 hours after crossing the finish line of my first 70.3 a few weeks ago.

First up is the Litchfield Hills Triathlon (an Olympic distance) on July 15. I have a score to settle with this race since I DNS’ed last year mostly because I was over racing and in a bad place with myself and training. Not so this year and, I feel like the Olympic distance will be fun. Yes, fun. I know.

I also have an opportunity to do another 70.3 Labor Day weekend in a cool, family oriented destination. The issue is I do not want to be tied to a training schedule over the summer. Between spending time with the boys and going on vacations, I don’t want to stress over getting my workouts completed.

Right now I have a training plan in place but I have full discretion to alter and delete as I see fit. I am super uncomfortable with the fly-by-the-seat-of-your-pants training regimen but, maybe it’s exactly what I need.

Question 1,002 is do I just take the summer off and resume training in the fall for a winter destination race in the Florida Keys?

[Tweet “The Rundown is asking all the questions and hoping you have answers! #helpawomanout #train4life”]

Do you have any answers? Do you train without a race goal?

What questions do you have for me?

*Also don’t forget to subscribe to this blog so you never miss a post! Scroll up and you will see how to sign up on the right hand sidebar!*