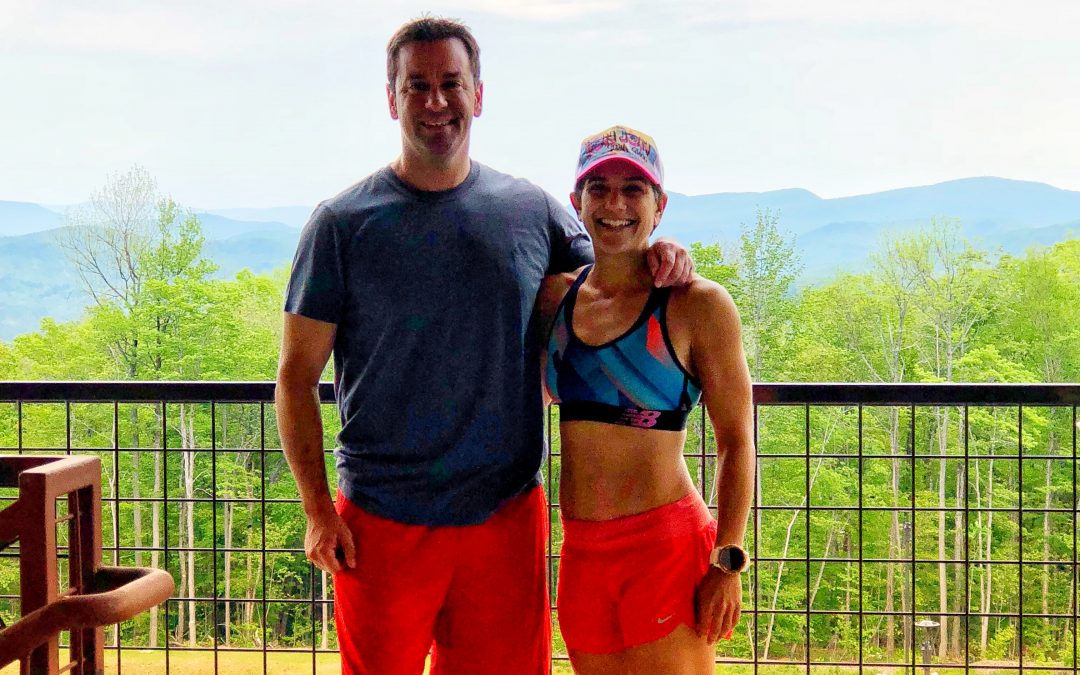 If the quote “sorry doesn’t make the noodles” seems familiar to you, you have watched Kung Fu Panda as many times as I have. In the opening scene, Po the Panda (voiced by Jack Black) oversleeps. When he rushes downstairs to help his dad (the Goose voiced by James Hong) make the much needed noodles for the noodle shop he owns, Po apologizes saying “sorry I’m late,” to which his wise Goose dad replies “sorry doesn’t make the noodles.” 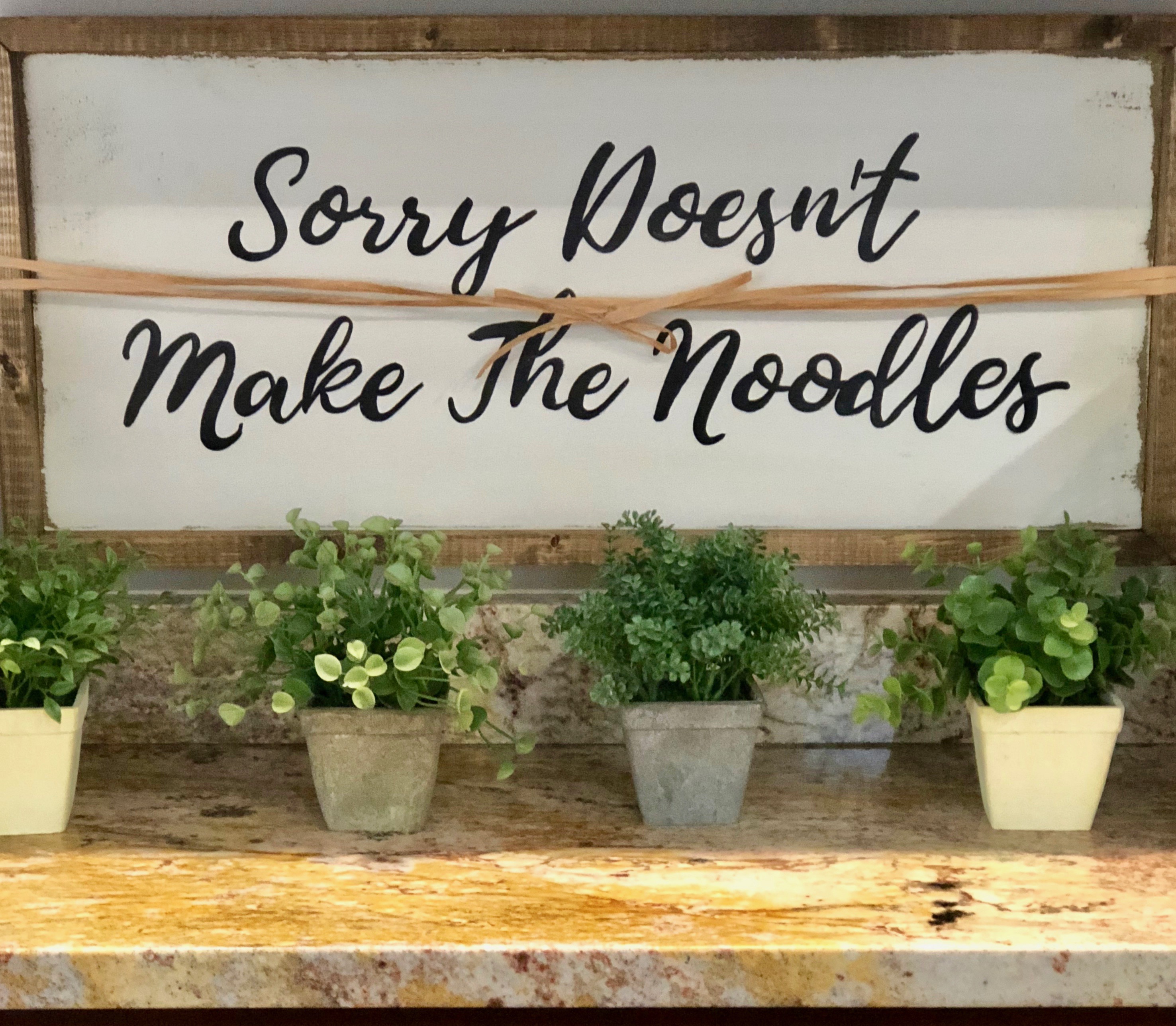 Yes, I have this hanging in my kitchen so I can just point to it when my kids try and use “sorry” as an excuse. It works every time.

All of my noodles seem to be cooking when it comes to running. I don’t think I’ve had this good of a running cycle in a while and I’m beginning to get very excited about the Las Vegas Rock and Roll Half Marathon in a few short weeks! Honestly, I’m excited just to feel as good as I do during some of these hard sessions. 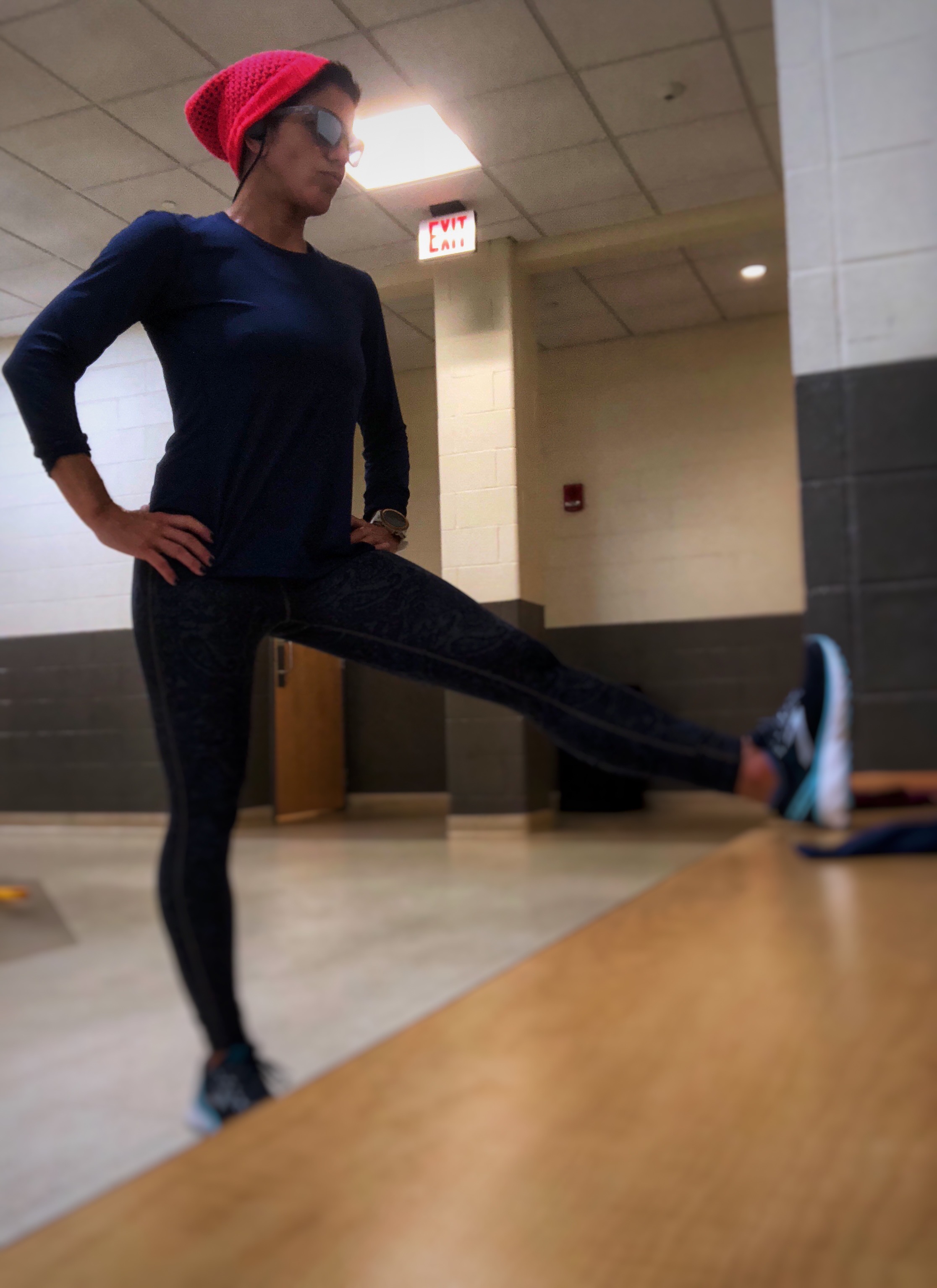 Stretching it out after a hard, windy run outside.

There have been many times when I wanted to just phone in a workout because it was too hard in the moment but, then I remember, it’s the hard that makes the noodles.

The two indoor sessions I was forced to have this week were pretty uneventful. One morning, instead of my usual 5:00am wake up to work, I headed to the basement to get my bike on before my date with a Peloton treadmill in a cage later that morning. More on that in “things I love” below…

Two super swims this week and one grueling session with Andre in the weight room. I tweaked my shoulder doing one of these so I’m trying to be kind to it, which is kind of difficult in the pool. You know you have issues when you’re second thought after “my shoulder is still hurting after 5 days of rest” is “well, I don’t really need it to run a half marathon.” 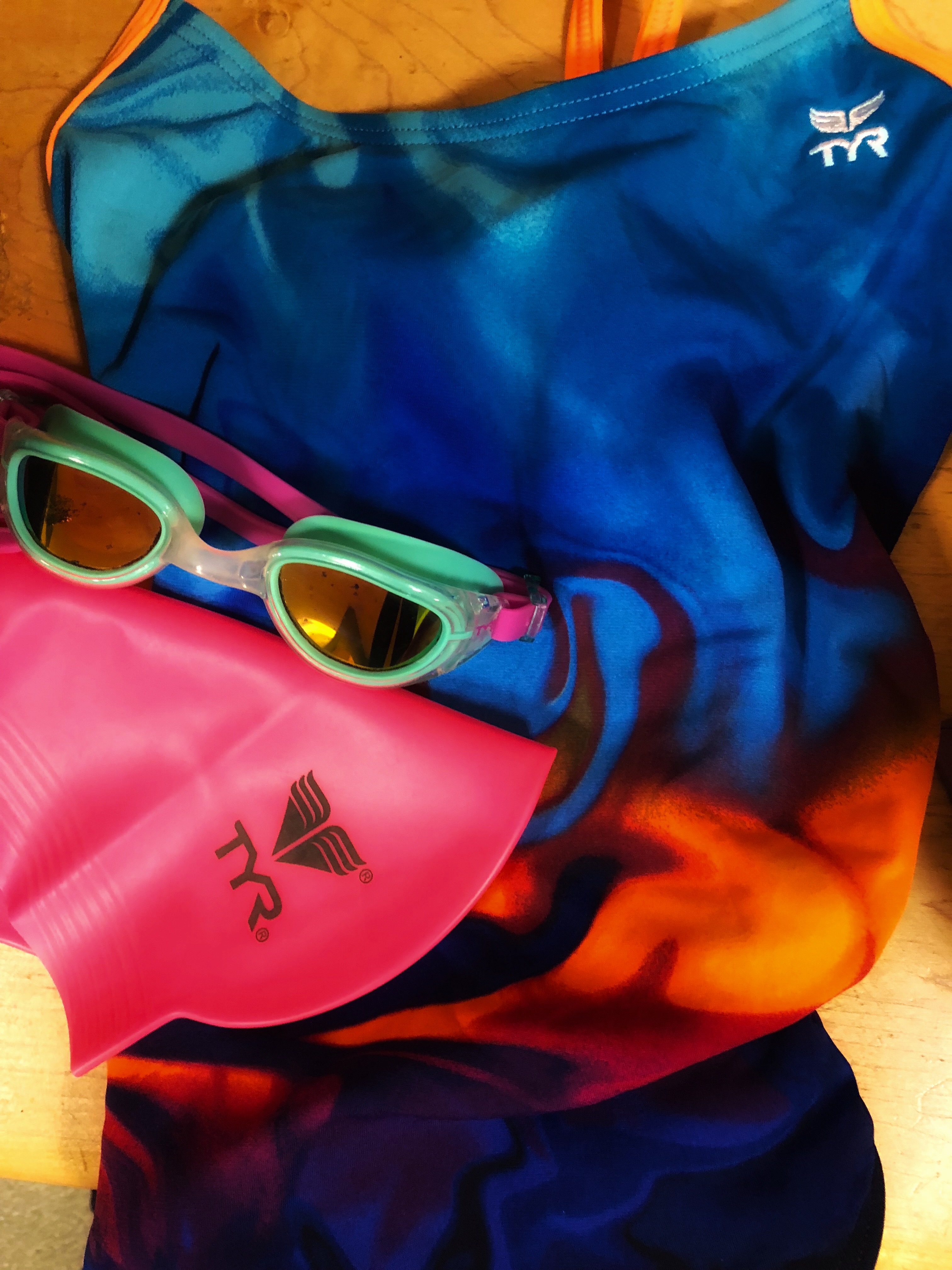 I ordered this super cute TYR swimsuit (it’s insane how many I go though in a year!) and they included the bright pink cap for fun. Thanks TYR!

Someone who knows me well enough to know that I would jump at the opportunity to try out the Peloton treadmill, even if it means doing so in a cage, in the middle of a shopping mall. 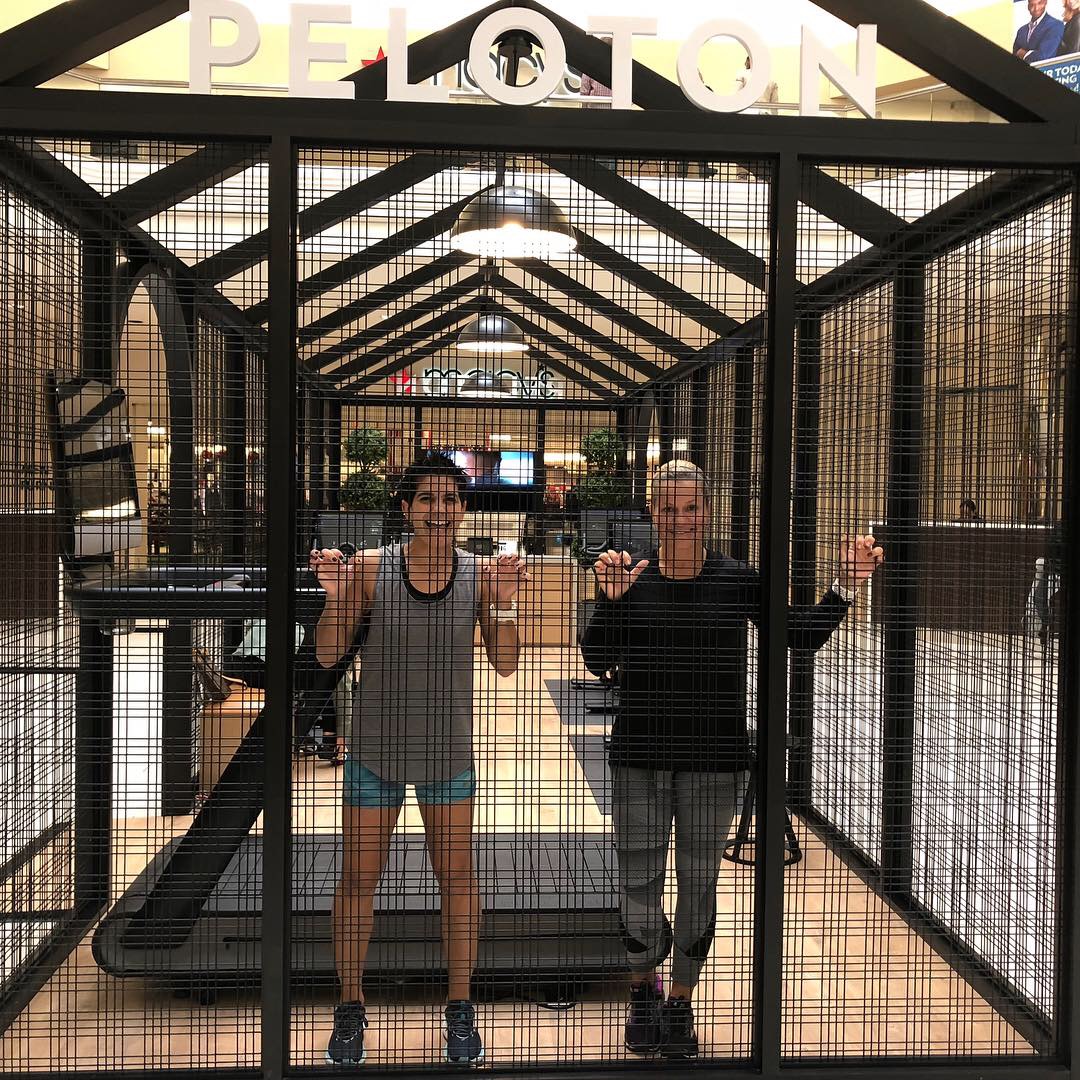 Let us out…wait…keep us in! This thing is amazing!

The good people at Peloton, who set up this pop-up shop at a local mall, probably didn’t bet crazies like me and my friend Barb would do a full blown class there, while the general public casually sipped lattes and stared at us. Well, now they know.

I’m also pretty sure I scared 75% of the people who walked by but that’s a story for another day.

Let’s get back to the Peloton treadmill and why it’s so amazing.

2. The tread on the treadmill is not typical and is amazing. Instead of it moving you, you move it, but not completely. It’s a rubber slat and ball bering system designed for less impact and I definitely felt it! 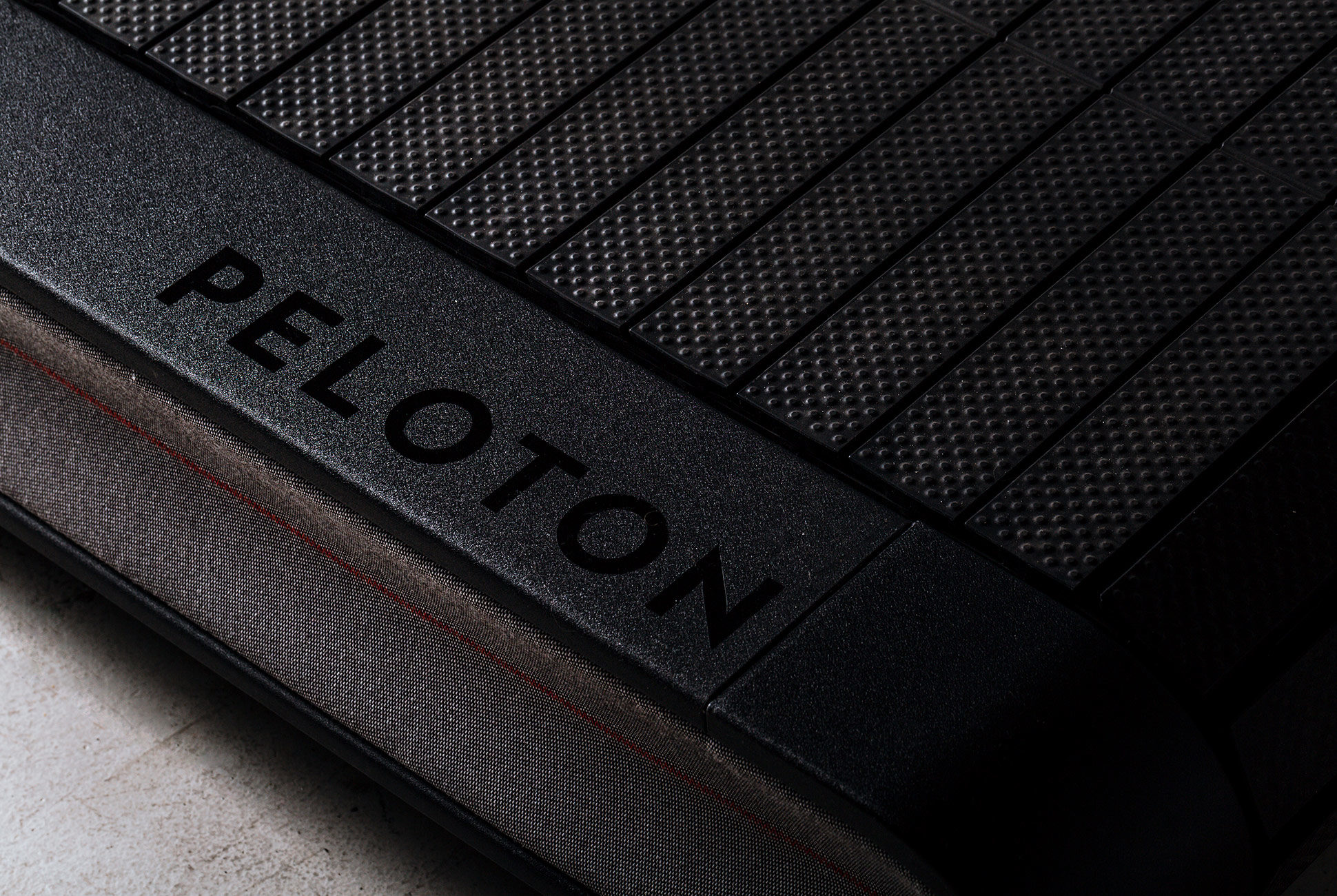 3. The screen on this thing can not get any bigger and it didn’t shake too much even when I picked up the pace. In fact, the entire treadmill space is like a Cadillac where most treadmills are a Cooper Mini.

4. I finally had a chance to take a class with the famous Robin Arzon! In case you don’t know, she’s a badass Peloton Master instructor (who used to be a lawyer) and is filled with motivating (and not cheesy!) quips and had a fantastic playlist. I mean, she played Work, Bitch which is basically my theme song so…

Robin is the badass on the left.

5. The class I did was a 30-minute interval class and I could easily make it my own in terms of speed, intensity and endurance.

6. Instead of tiny little buttons to control your pace and incline, there are large wheels mounted to the sidebar — the left side is for incline and right is for speed. In the center of the wheel is a “jump” button. You can customize your “jumps” for any pace and incline and, when you’re ready, simply push the button and you “jump” to that speed or incline. It’s probably the best feature ever created. 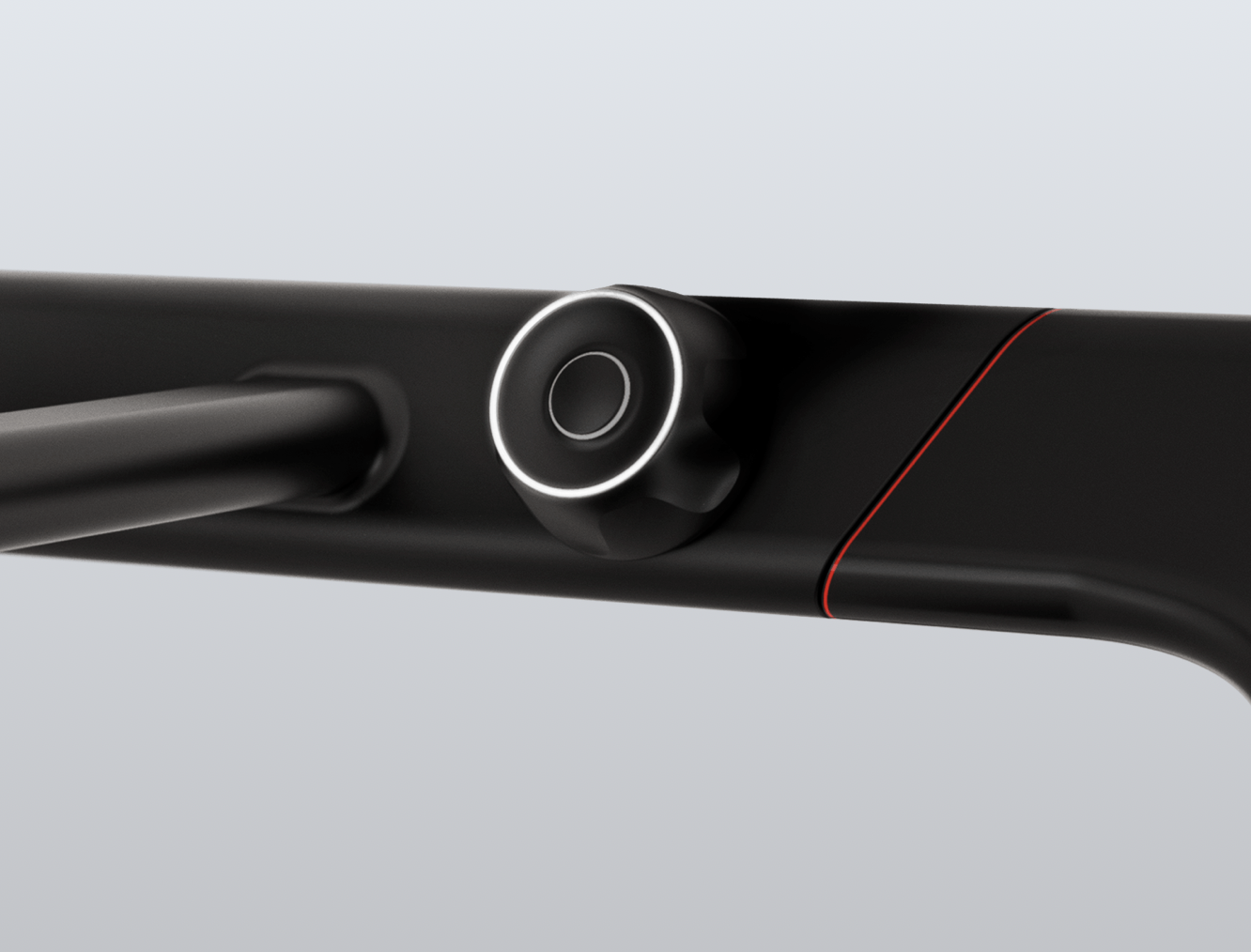 I could go on and on about this thing but you really should check it out for yourself. Since we literally just bought a Landice treadmill three years ago, I’m going to have to sell my husband on the bootcamp feature, and then sell the Landice. Christmas is coming…

I hate this because I know I need it and I hate that I actually need it. I knew something like this was coming because that’s how drug dealers work — they suck you in, get you addicted and then when you’re fully hooked, they sell you something to control the addiction. Introducing the SCREEN TIME settings on your iPhone!

You can actually now set time limits on all your apps and those of your family members. If you have teenagers, this is a great way to curb their time and you can do it without them even knowing and then watch the freak out commence.

The worst (ok, best) thing about it is you get a pretty detailed report of how you spend your time. Cringe. 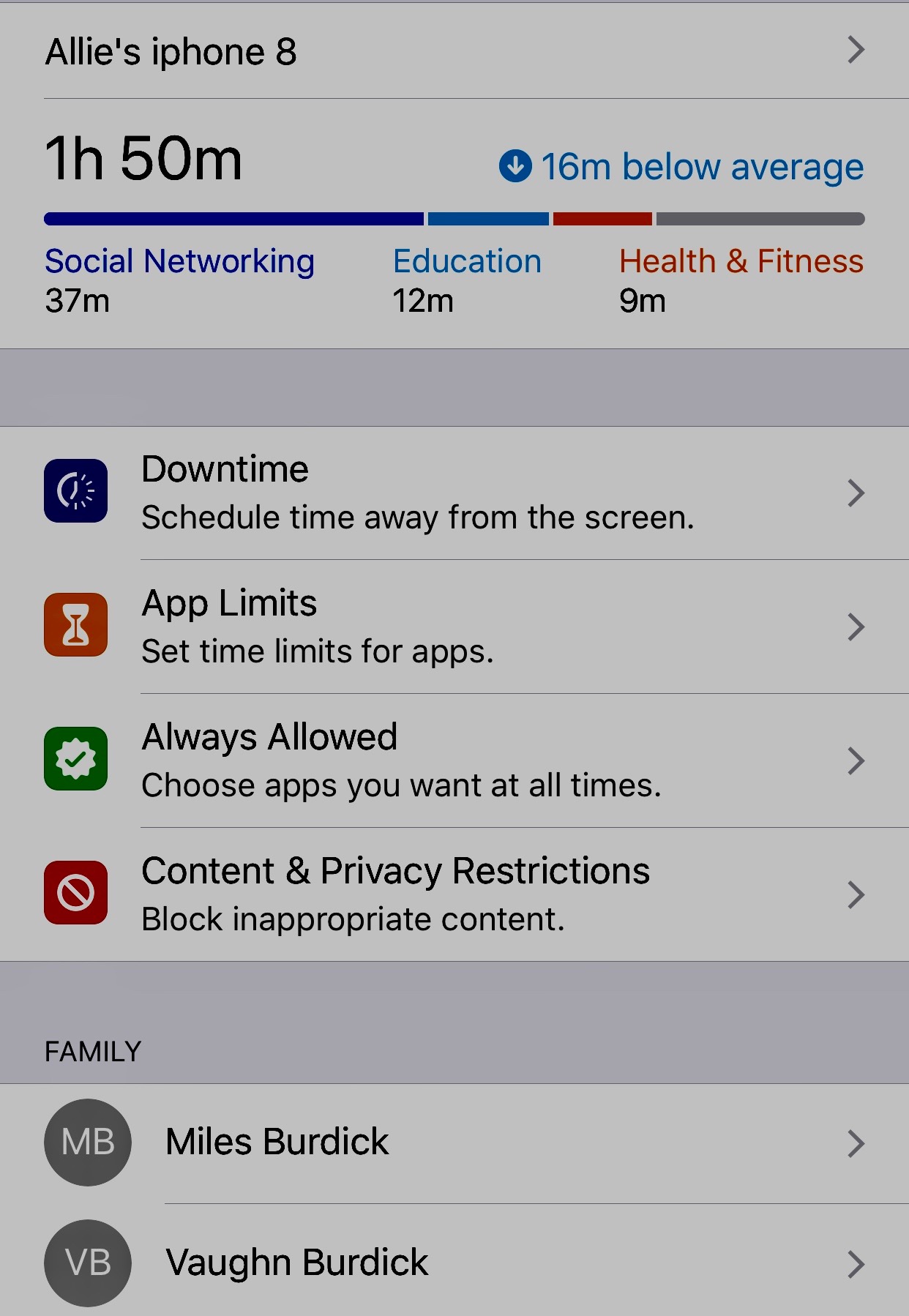 I actually feel pretty good about “only” spending 1 hour and 50 minutes doing things other then email, phone calls and texting (those things don’t count) as I pointed out to my husband, you’re supposed to use your phone to communicate, remember?

You also get a 5 minute “warning” of when the time limit you set is about to expire and you can ignore it or reset it. Since I started using the time limits, my daily average has gone down by 15 minutes, which is probably a very good thing.

As soon as it was over, I wanted to watch it again. I’m still in awe of the journey Becky Rusch took to find the crash site of her father’s plane, where it was shot down on the Ho Chi Minh trail in 1972, when she was just three years-old. Rush is an elite ultra-endurance mountain biker and, along with Huyen Nguyen (a cycling legend in her native Vietnam) and a team of strategists, history experts and bike mechanics, rode all 1,200 miles of “Blood Road” as the Ho Chi Minh is referred to, to find the place where he father’s plane was last seen.

Not only did I learn about the human spirit and the strength you can summon when the goal is so great but I learned so much about the Vietnam war and the devastation those who live on the trail are still dealing with. It’s remarkable in so many ways.

Last time we were in Vermont, I headed out to go for a run. I usually see a few people near the base of Okemo or maybe some people walking but hardly anyone else running. I’m constantly on the look out for bears but mostly I’m distracted by my heavy breathing as I struggle up the side of a mountain.

I was nearing my last mile when up ahead I saw what I thought was a man running. Almost as soon as I saw him, he abruptly turned around and vanished from my view. I was running toward where I saw him and, as I got closer, I was on high alert since I had no clue where he may have gone since there were no houses or condos near by.

I decided not to press my luck and just turn around and head back. It’s also important to point out that I was not wearing headphones. After I turned back, I heard what only can be described as a kind of guttural yell. I thought “what the hell?” For a moment I entertained that it could be my husband or brother in law but I quickly thought if it were one of them they would yell my name. Then I thought maybe this dude is trying to warn me of a bear or maybe he’s a psycho rapist.

I took off. I thought “not today mother fucker” and high tailed it back, running pretty fast so I could keep a good distance. Just as I was about to hit full panic mode I heard “ALLIE!”

It was my husband.

He said he was trying to catch me but couldn’t. No kidding. He also said he could only get out a grunt the first time (because he hates running which is also why I was stunned to find him out there) and then he realized I was scared and running away from him. He was also doing repeats which is why he turned around and “disappeared” when I first noticed him. 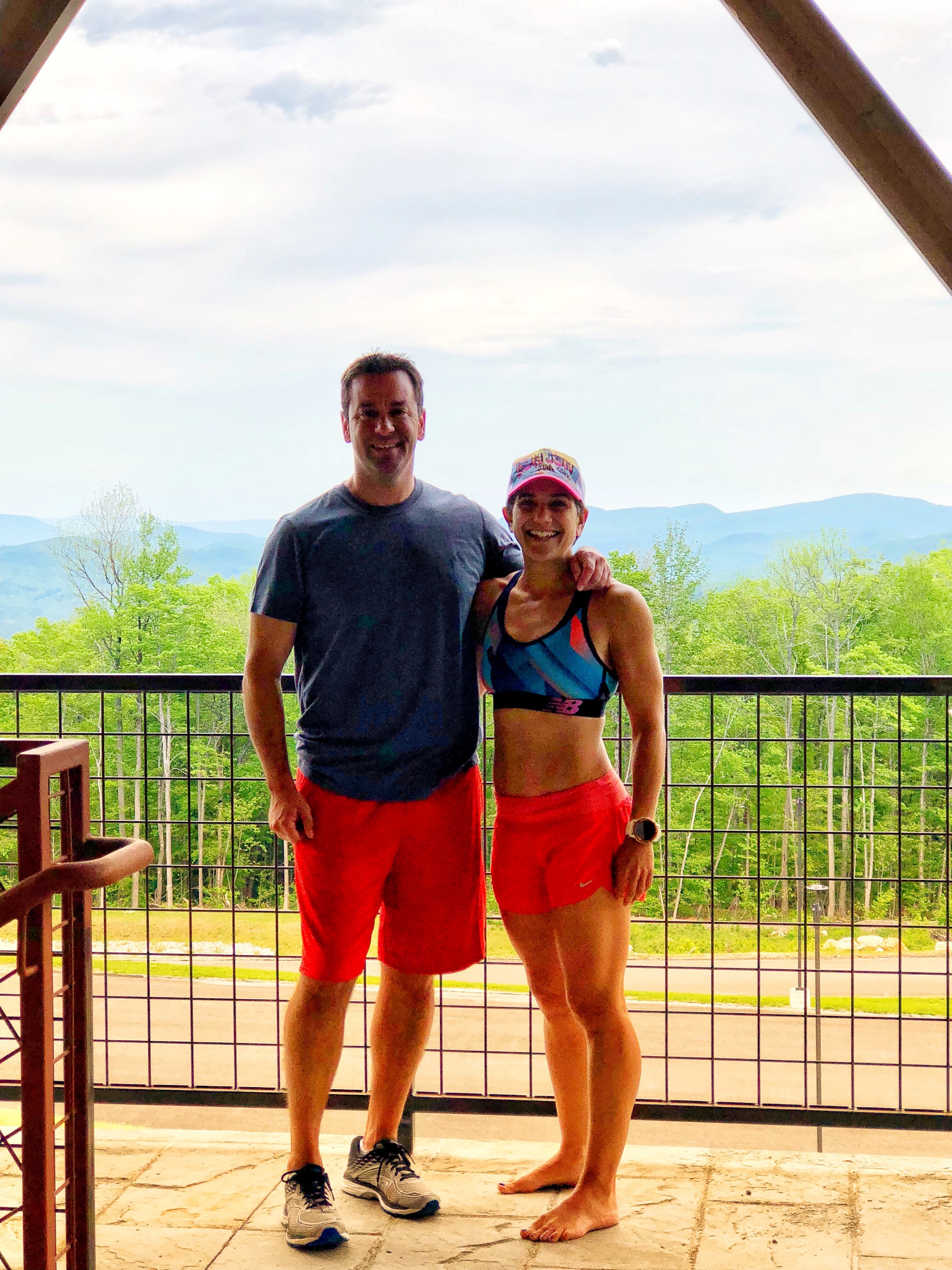 In Vermont when he’s not scaring the shit out of me.

We laughed about it later but it just reinforces all the ways women feel vulnerable when running alone. I think my husband totally understands that now and is probably grateful to use this as a reason not to run again…

He makes noodles in other ways.

Here’s to another week of no excuses!

[Tweet “The Rundown has sage advice, a review of @onepeloton #treadmill and a lot more! #train4life #sorrydoesntmakethenoodles”]

Do you have a favorite saying like that one?

Have you tried the Peloton treadmill or bike?

Are you or would you use the iPhone screen time limiters?