The Rundown – What Day is It? 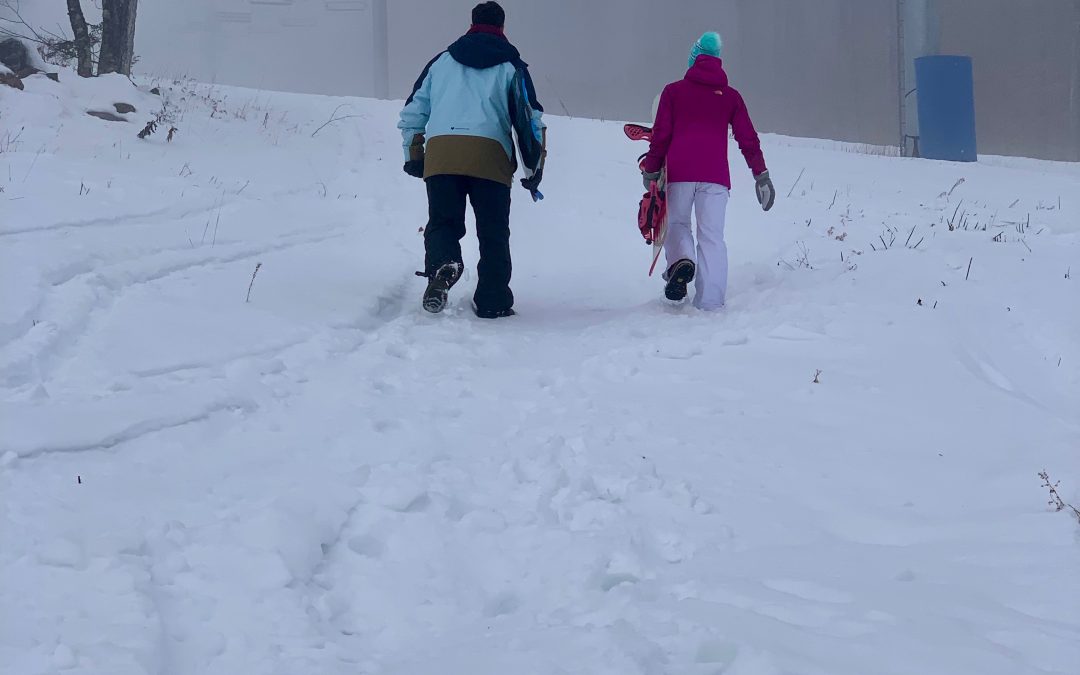 The holidays are a whirlwind in the best and worst ways. As with all time off and forced family get-togethers, there were highs and lows for me. There are plenty of things I’m not thankful for, but so much more that I am, and I’m trying to keep that in mind while I figure out what day it is every morning! Right now I’m in a lull as far as training goes, we’ve already been enjoying some skiing and snowboarding in Vermont and, with one holiday down and one massive one yet to come, please forgive me if I’m not regularly posting here. In fact, since I know everyone is short on time and patience, I’ll keep this short and sweet so no one ends up like Miles did before he even did one run… 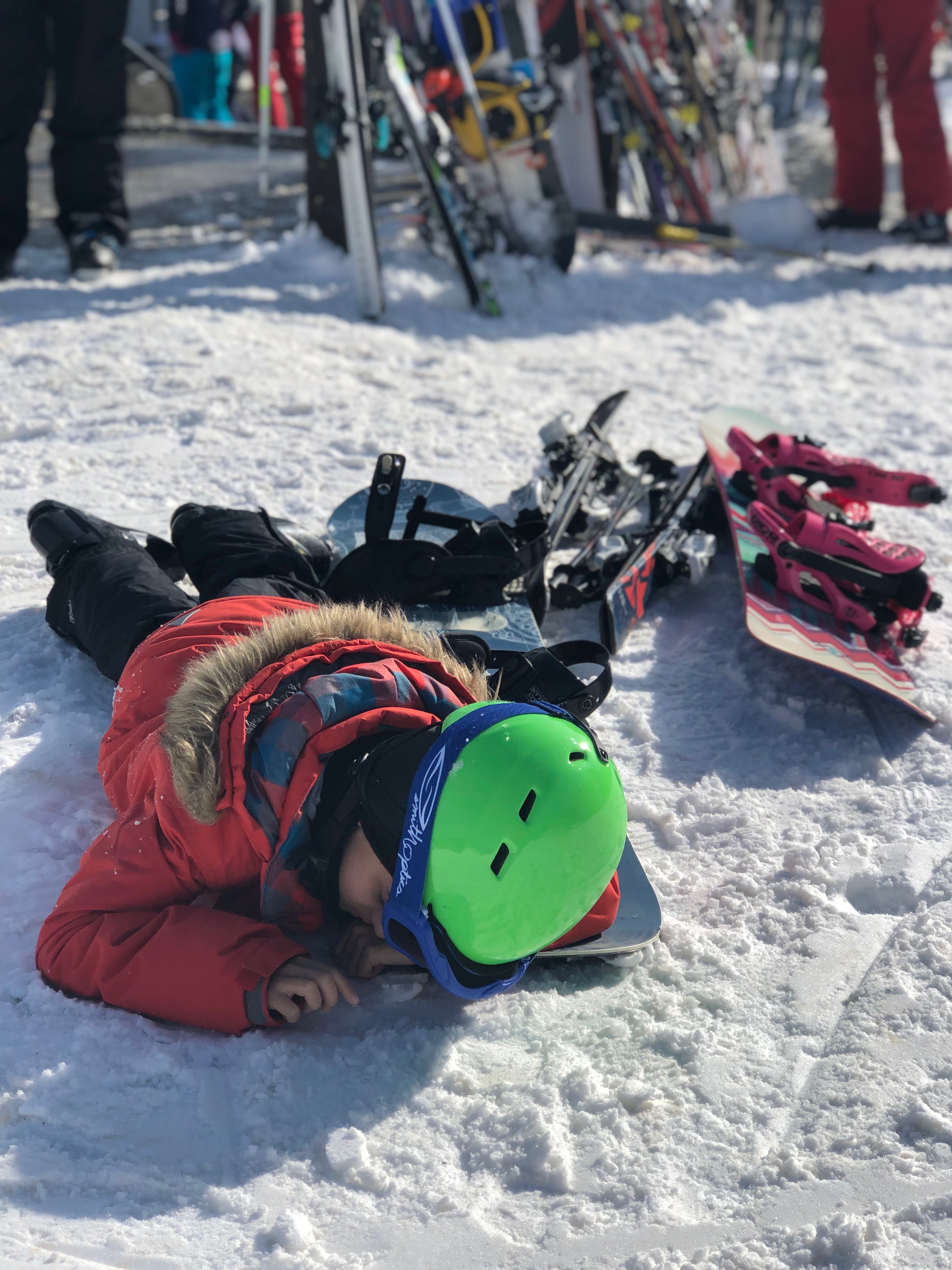 Poor Miles (and me!). Luckily, he rebounded nicely and we had a great day.

SOMETIME BETWEEN NOV AND DEC 2018

Um, what? Oh that! Yeah, I actually haven’t been doing much running at all and guess what? I’ve been fine with it. My mind and body definitely needed the break and now I’m mostly running after my kids skis or ski poles, running around the house decorating or running to bed to get some rest. ‘Tis the season. 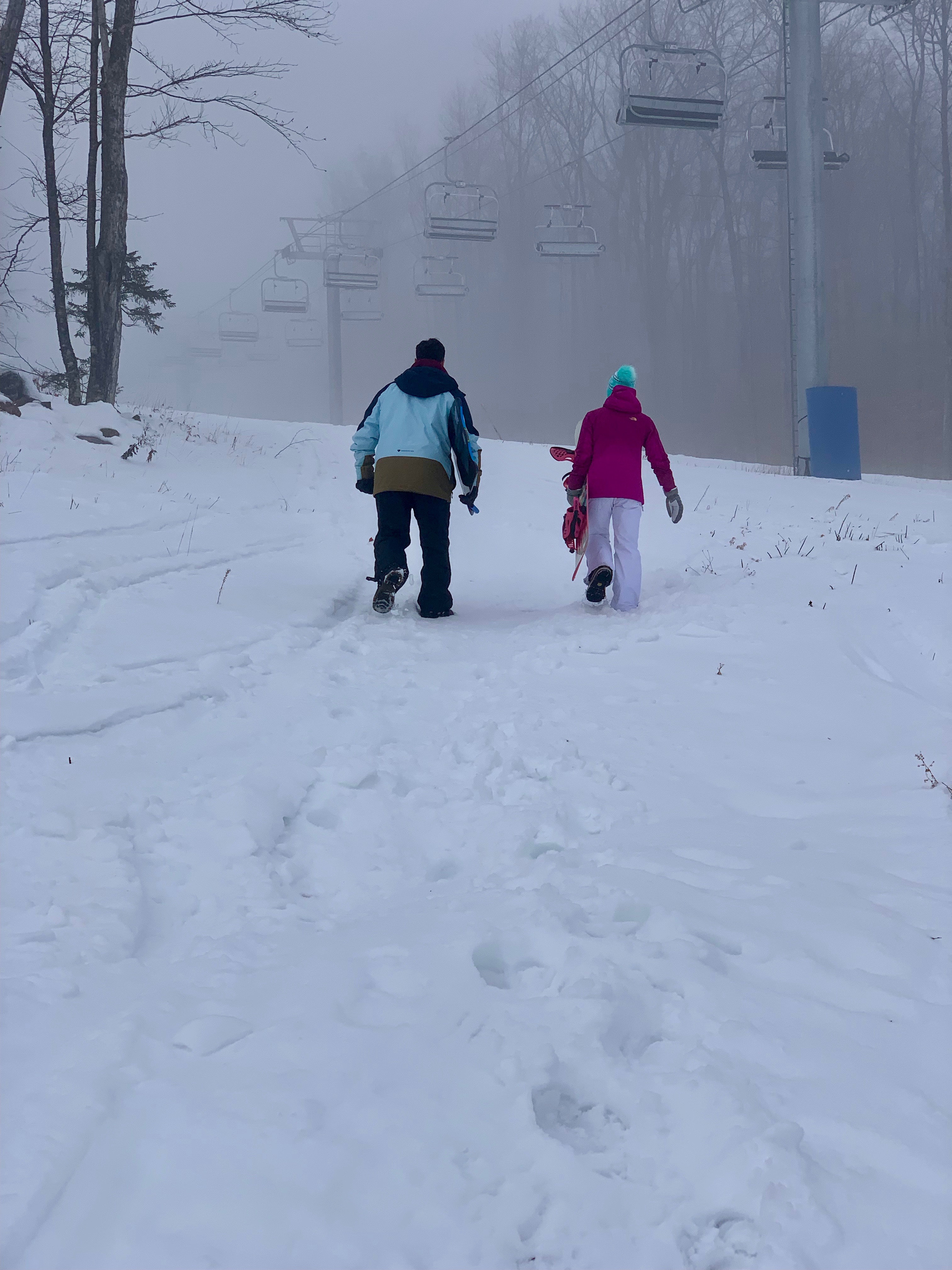 Walking up the mountain to find the freshness…

I have been keeping up with my cycling in the basement on the trainer but mostly because it gives me an excuse to watch Shameless or Ray Donovan.

I did register and make all my hotel arrangements for the Duathlon National Championships in April and I will be ready to go in 19 short weeks. Yep, that’s how close April 14th is. There is hope after the holiday season people so just hang on!

My trainer continues to kick my butt and my weekly hour with him has been the only consistency in the past two weeks. I have gotten into the pool of my own free will and have enjoyed several recovery swims. Let me tell you, there is a huge difference when I swim after strength training and when I don’t. The difference is I can get out of bed in the morning without saying “fuck” in the first 10 seconds. #gratitude

I shared this video and story on Facebook but, ICYMI, I want to share it again. The woman in this video walked into my personal training studio (VITA Train for Life) sometime in 2010. She was morbidly obese, scared and had an excel spreadsheet of what she wanted to accomplished in the next year. She was one of the most determined people I have ever met and, in the years that passed, she has consistently trained (with and without me), accomplished all her goals, and we have remained close friends for the past eight years.

One time, while I was training her for a race, I “invited” her to run up the hill I live on. It’s massive. It’s intimidating. No one wants to even walk it. Not even dogs. But, she said yes. Years later, after receiving a devastating diagnosis, she wanted to come back and run it with me again. This video tells a small part of her story and shows us running up that same hill, together.

Before you see what Marisa looks like now, you need to see the transformation that happened then. The picture on the left is her and I in 2010 before running a 5k and the one on the right is two years later in 2012 after running a 10k. 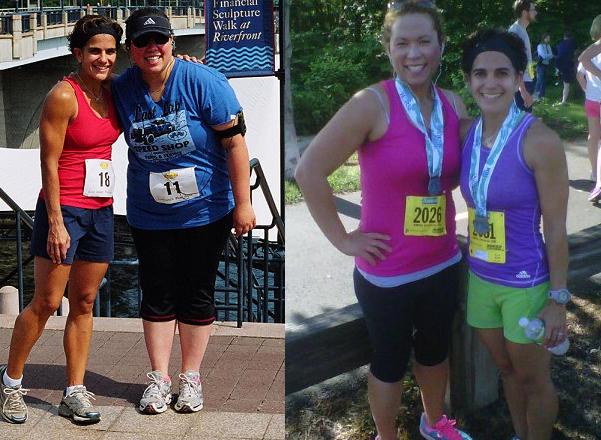 And now, here is Marisa, eight years later with her greatest challenge yet…

I come in around 2:44 and there’s footage of us running up the hill at 4:26 but I really encourage you to watch the whole thing, especially if you’re struggling in any way with motivation or the will to fight.

Having gratitude and thankfulness being shoved in your face at every turn. For some, the holidays are miserable and not everyone is feeling the joy. If you find yourself in that space, I’m here to tell you it’s okay!

I painfully remember those first few holidays after my mom died. The very last thing I was feeling was thankful or grateful for anything. I was hateful and resentful and so very sad. The holidays can be a special hell for any family suffering loss or who have any kind of family feuds – new or ongoing. I know how it feels to be bombarded with joy and holiday cheer and actually add guilt to the long list of feelings you’re already being attacked by. To this I say – it’s okay (and even healthy) to not be thankful during this time of year. Really, it is. So, if you find your ears bleeding with every holiday song or wanting to rip the garland off every store entrance, feel it and even embrace it, and hopefully you will come out better on the other side of January.

Two new shows I highly recommend, both of which are the opposite of holiday cheer, are Homecoming (Amazon Prime Video) with Julia Roberts and Escape at Dannemora (Showtime) with Benicio del Toro and a bunch of other people but, let’s face it, all you need to know is Benicio is in it and it’s a true story.

HOMECOMING is kind of a freak show and will leave you wondering what the hell is going on. This is a very different role for Roberts who plays caseworker Heidi Bergman at a mysterious facility for veterans. The show jumps timeframes but the future looks very much like the past – the distant past – and each episode leaves more questions then answers until the final few. Absolutely worth watching and, the 30 minute bite-sized shows will leave you wishing they made it so much longer. 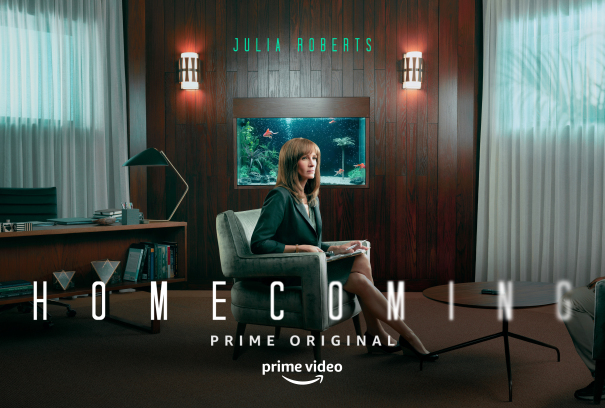 ESCAPE AT DANNEMORA is directed by Ben Stiller and is not the least bit funny. Based on the true story that played out just a few summers ago, this Showtime series is hard to stop watching. You will barely recognize Patricia Arquette, who gained a significant amount of weight, to play the role of Joyce “Tilly” Mitchell, the civilian who helped two prisoners escape “little Siberia” aka Dannemora prison, in upstate New York in 2015. Unfortunately you can’t binge this one and have to wait an entire week for new episodes. Damn you Showtime! 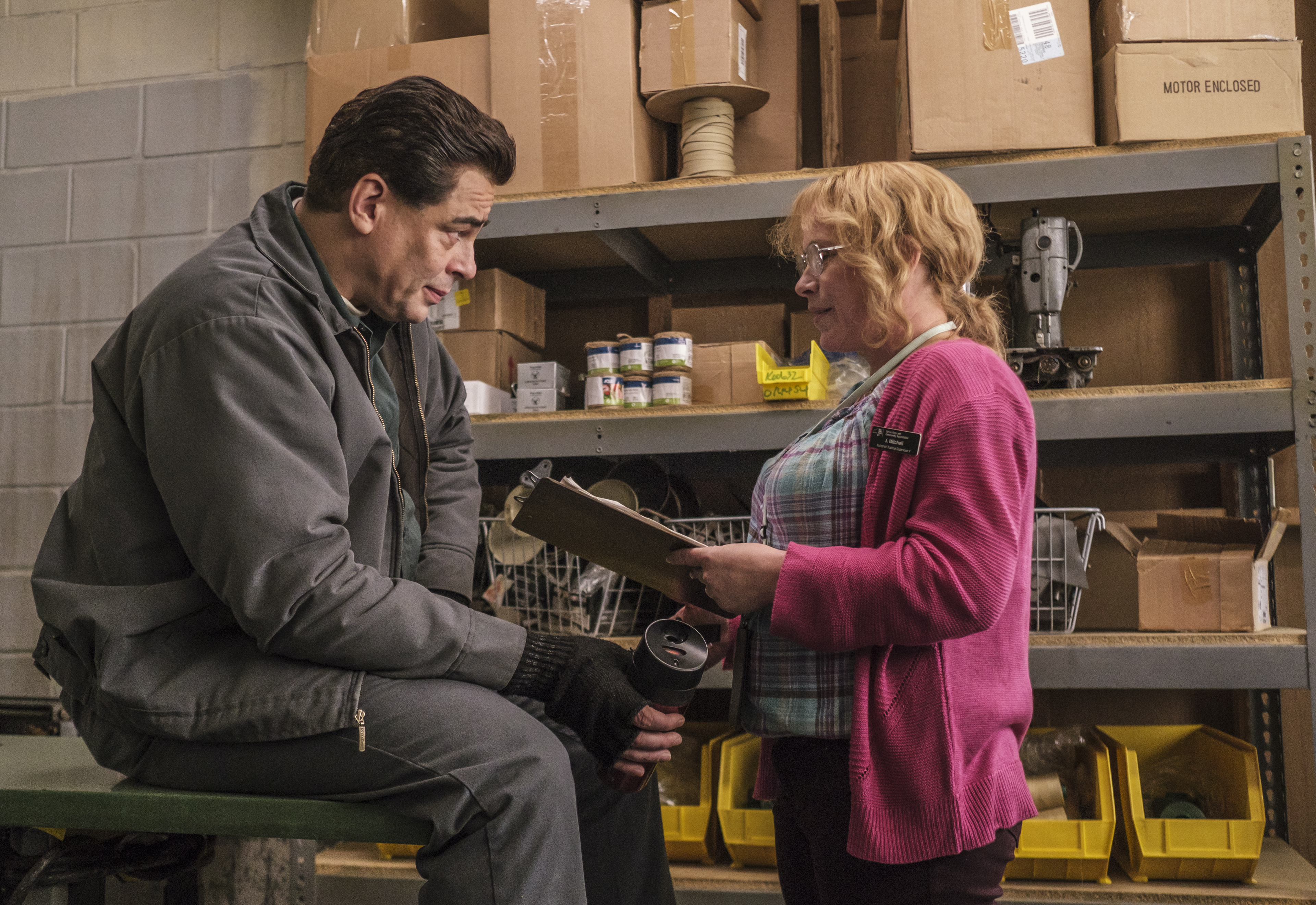 I’ve come to realize that the holidays are what you make them. You have choices – from the people you are spending your time with, the food you eat, the exercise you do (or don’t!) and the thoughts that are constantly inside your head. In the years since my devastating Christmases mourning the loss of my mom, I have taken control of my world and my mind. I try to hang on by letting go and when I feel overwhelmed I take the time and space I need to breathe.

A classic example I can share is my wicked hate for the elf on the shelf. This little bugger took over my life in Christmases past and I had cursed his very existence, until I found this… 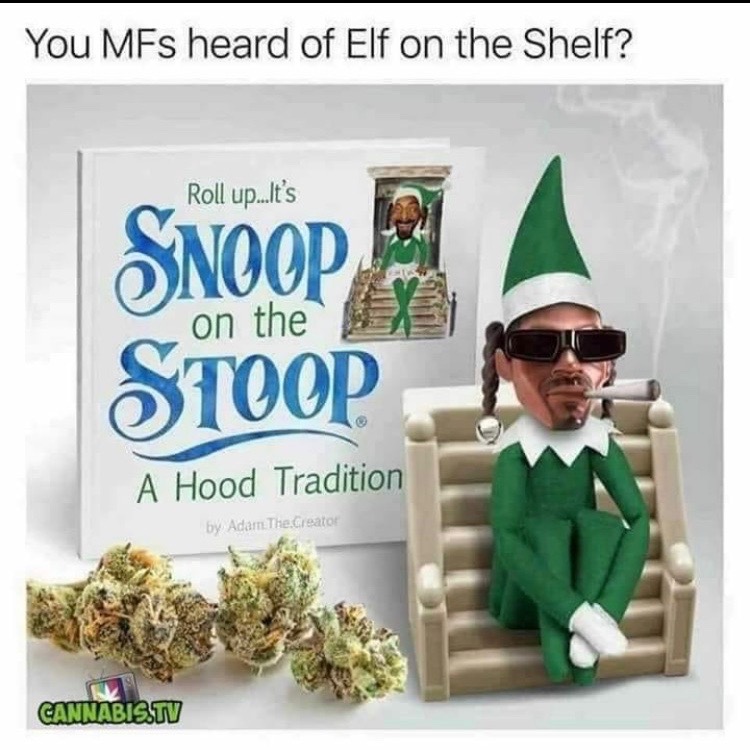 …and the house has been calmer ever since. #grateful

Here’s to December weeks of calm, watching non-christmas shows, not knowing what day it is and not caring even a little bit!

[Tweet “The Rundown is fighting for mobility, in a training lull and loving not knowing what day it is! #train4life”]

How are you? How was your holiday?

Do you have someone who inspires you like Marisa?

Do you know what day it is?